Winchester Repeating Arms, the beloved American firearms company behind “the gun that won the West” and brand new ammo supplier... 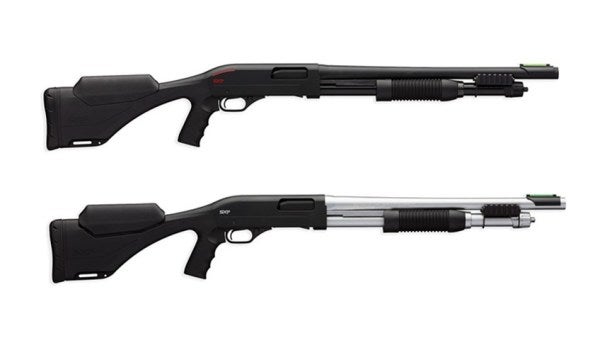 The SXP Shadow Defender and SXP Shadow Marine Defender, the two additions to the company’s Super Pump X (SXP) shotgun series, both feature synthetic grips and stocks and two interchangeable 1/4” pull spacers and comb pieces for adjustability, as well as Picatinny rails for customizability. Both models were announced by the company on May 24.

The chrome-plated Marine Defender in particular was “originally conceived for protection for coast bear hunters and seafaring boaters,” the company says, designed to “stand up to wet conditions and offer extra protection in salty environments.”

After spending years building its ammo-production business, the company “has been on a roll over the past few years” when it comes to churning out new rifles and shotguns for Winchester fans, according to The Firearms Blog: “The semi-auto guns, the Super X3 and new Super X4 have been well-received by the hunting community.”

Both Super X Pump models are offered in 12- and 20-gauge variants with a 3” chamber, 18” barrel length, and alloy receivers are drilled and tapped for bases and rings. Here’s a full list of features, per Winchester:

The shotguns sell for between $449.99 and $519.99. But exercise caution: In 2015, Winchester issued a recall notice for several Super X Pump (3.5 chamber) models after reports that the shotguns “unintentionally discharge while closing the action.”