Brace yourselves: Kalashnikov has a new rifle in town. Kalashnikov Concern, the largest arms manufacturer in Russia and industrial avatar... 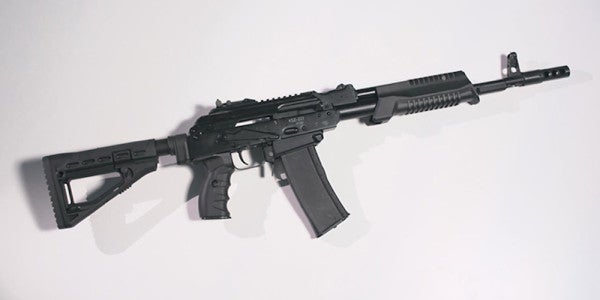 Brace yourselves: Kalashnikov has a new rifle in town.

Kalashnikov Concern, the largest arms manufacturer in Russia and industrial avatar of military engineer Mikhail Kalashnikov’s creative genius, has been branching out beyond its iconic AK-47 assault rifle for years, but the latest addition to the company’s arsenal packs way more than a punch.

The company in April announced the release of the KSZ-223 rifle, a sleek pump-action beauty that appears better suited for the set of an action flick than the Russian National IPSC Rifle team for whom it was developed.

Based on the Saiga semi-automatic rifles designed as a sporting version of Kalashnikov’s legendary AK rifle series, the KSZ weighs a relatively compact 9.25 pounds, boasts a 16.3-inch barrel, and has a capacity for 10 and 30-round magazines. But the most satisfying feature is likely the classic pump-action which, taken with the KSZ’s ergonomic pistol grip, makes the rifle a dream to wield.

But don’t take it from us: check out this batshit crazy promotional video from Kalashnikov Concern:

The Firearm Blog has a fine rundown of the KSZ’s more unique features:

The gun also retains the recoil spring, which should feel weird for those who shoot pump action shotguns. However, that feature will possibly allow faster and more reliable cycling of the action because the forward movement of the BCG is supported by the recoil spring.

The gun also has a left side charging handle along with the traditional AK charging handle. You may think, why does a pump action gun need a charging handle? But as you can see in the video, that feature comes in handy when shooting from a prone position, when the access and manipulations of the forearm/slide are not that convenient.

The KSZ is currently a limited-edition product solely for Russian competition in the manual division at the IPSC 2017 World Rifle championship in June, but according to The Firearm Blog, Kalashnikov will make a decision whether to release the sleek rifle to civilian buyers.

While it’s unlikely the KSZ will ever supplant standard U.S. armed forces rifles like the M4. Then again, compared to Kalashnikov’s ridiculous promotional video, I sort of prefer a recommendation that doesn't take itself too seriously, like this (unofficial) Mossberg endorsement by Greg Kinman on Hickock45: