How The AK-47 Became The World’s Most Feared Firearm

In September 2016, fighters from the Free Syrian Armyran American special-operations forces out of a town near the Turkish border, hurling... 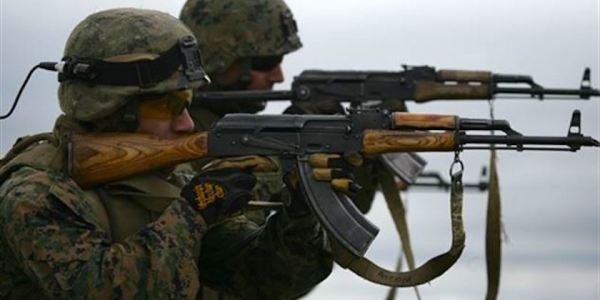 In September 2016, fighters from the Free Syrian Armyran American special-operations forces out of a town near the Turkish border, hurling insults like “infidels,” “crusaders,” “dogs” and “pigs.” These fighters, who are actively benefiting from U.S. support, brandished the most recognizable gun of all time: the AK-47. The power of this image cannot be understated.

Thanks in no small part to the film, television and video-game industries, most people associate the AK-47 with tyrannical terrorists, depraved drug cartels, and rabid rebels. Indeed, the high profile use of Kalashnikovs in theDallas police shooting and theIslamic State’s Paris attack reinforces this link. Originally built for the Soviet Army and as a tool for spreading communism around the globe, there are now over75 million Kalashnikovs and variants in circulation, produced by nearly one hundred nations. The rifle is easy to produce, easy to use and reliable, which makes it so effective at. The AK has made its mark in countless conflicts on nearly every continent. The story of this weapon is one of battlefield utility, market saturation, and ill-advised arms shipments.

To understand how the AK became as important as it is, ones must revisit the context in which it was designed. Mikhail Kalashnikov incorporated lessons learned from the Second World War in creating his namesake. During the war, the Soviets found that the intermediate cartridge would be ideal for frontline troops. Unlike large-caliber rounds common of the period, intermediate-sized rounds would be easier to shoot in rapid succession, be lighter and allow troops to carry greater quantities of ammunition. The Germans developed their own round, the 7.92mm Kurz, for a rifle called the Maschinekarabiner 42, which would eventually evolve into the StG44 (Sturmgewehr). This weapon had a particularly high rate of fire, a larger round than submachine guns, yet was lighter than a machine gun.

The StG44 stood in sharp contrast to the weapons used by the Soviets in the war, primarily the PPSh submachine gun (high rate of fire, but pistol caliber) and the Mosin-Nagant (large caliber, but bolt action). Seeing the utility in the German design, the Soviets sought to create their own version of this rifle. The end result, the AK-47, enabled the Soviets to bridge the capability gap between the different weapons they most frequently used during the war.

The Soviets also wanted firearms that were rugged, simple to produce and cheap to make. Field conditions on World War II’s Eastern Front were particularly brutal and required exceptionally robust weapons. Kalashnikov designed his rifle to deal with dirt and debris by giving it loose tolerances. This allowed the AK to shoot accurately up to a few hundred meters, but withstand horrendous abuse. To be able to provide firepower, resist unbearable conditions and fire reliably for its size was a game changer in the late 1940s and has become the modern standard. Furthermore, the AK-47 was inexpensive and required minimal materials to create. Winning war is about more than just killing the enemy; cost efficiency is crucial. Future renditions of the rifle (primarily the AKM family) would only make the rifle cheaper and even easier to build through simplified production techniques.

Marines fire the Soviet Avtomat Kalashnikova (AK-47) as part of the Foreign Weapons Instructor Course at Marine Corps Base Quantico on, March 6, 2012Photo via DoD/Wikimedia Commons

Throughout the Cold War, the AK provided the proletariats of the world with the means to rise up in communist insurrection. This mentality, that one must always be ready for war and continue the revolution, made arms production a core component of socialist planned economies. Moscow supplied millions of AKs, RPKs, PKMs and other Kalashnikov variants to friendly socialist nations. The beauty of such a simple device was that the Soviets could also lease plans of the rifle so that the weapon could be produced locally. The AK-47 and its derivatives could be built in nearly any country.

The AK first saw widespread military use in Vietnam. American soldiers saw its effectiveness firsthand, as farmers armed with the rifle proved a tenacious foe. Washington would take this experience to heart and go on to design the AR-15 (what would become the M-16) with such lessons in mind. In doing so, the United States ended up arming its troops with a rifle that was lighter and capable of suppressing fire as well. In effect, America was saying goodbye to large-caliber rifles like the M-14 as standard infantry rifles, moving closer to the Soviet model. The reach of the AK and weapons inspired by it would go on to provide the fuel for much of the violent encounters of the Cold War.

Related: Watch This Compelling Proof That AK-47s Are Indestructible »

An example of the global reach of the AK can be seen in 1980s El Salvador, described in New York Times journalist and Marine Corps veterans C. J. Chiver’s book,The Gun, a meticulous history of the rifle and its impact. Communist guerillas operating in the country were initially waging war using leftover local weaponry and whatever surplus they could find. Government forces eventually started finding AK variants from North Korea, East Germany, and Yugoslavia in rebel hands, with ammunition originating from Cuba. This supply network showed that the Soviet model of exporting small arms to socialist nations around the world worked. The AK had a worldwide network and could supply conflicts anywhere due to the massive amount of governments that used or produced the rifle.

During the Soviet-Afghan War, mujahideen forces started their struggle using weapons as dated as the “Boer” rifle from the British-Afghan War (The Russian General Staff detailed the arming of Afghan forces in theirwrite-up of the conflict). The Kremlin-friendly government in Afghanistan was supplied with AKs and other Warsaw pact weapons prior to the war. The CIA, wealthy Saudis and others who had a stake in seeing Moscow fail would provide a steady flow of additional arms. In effect, the war turned the Kalashnikov against the army it was made for. After years of fighting, thousands of weapons would be left behind in the country, giving warlords the tools to install the Taliban and continue to bedevil American strategists who currently seek to stabilize Afghanistan.

An Afghan National Army lieutenant prepares to fire his AK-47 on the 150-meter target range March 14, 2007, at the Kabul National Military Center.Photo via DoD

Kalashnikov’s rifle has continued to fuel guerrilla warfare, terrorism and crime after the Cold War ended. Although Kalashnikov himselfclaimed his rifle was a tool of liberation, the AK is more frequently seen in the hands of terrorists or the cartels in Mexico. Smuggling AKs also tends to be easier than moving bomb-making materials and other destructive devices, in part why the rifle has been branded as the terrorist’snew tool of choice. Nations and nonstate actors have also supplied AK variants to wageinsurgency and violence in Libya, Ukraine, Mali and beyond. More often than not in Syria, the Kurds, ISIS and government forces are pointing the same weapons at one another.

What does this all mean for American foreign policy? With Syria and Ukraine weighing heavily on U.S. policymakers, an otherwise obvious point needs to be made: shipping small arms to far away places does not a foreign policy make. Washington has little control over where these weapons end up. The choice to armAfghan National Police units with Hungarian AK derivatives was problematic, to say the least. American rifles are now beingfunneled onto the black market in the region. These weapons—whether through theft, abandonment or illicit trade—help sustain the Taliban, ISIS, and others.

It is not certain that Washington directly supplied the weapons that featured in the embarrassing video along the Syrian-Turkish border. The Pentagon and CIA are currently backing competing rebel groups in Syria, further blurring the line separating freedom fighters and terrorists. Washington must reassess the benefits of so liberally injecting weapons into disparate conflicts. In the current Syrian nightmare, the opacity of who constitutes righteous rebel or terrorist only makes this process more difficult.