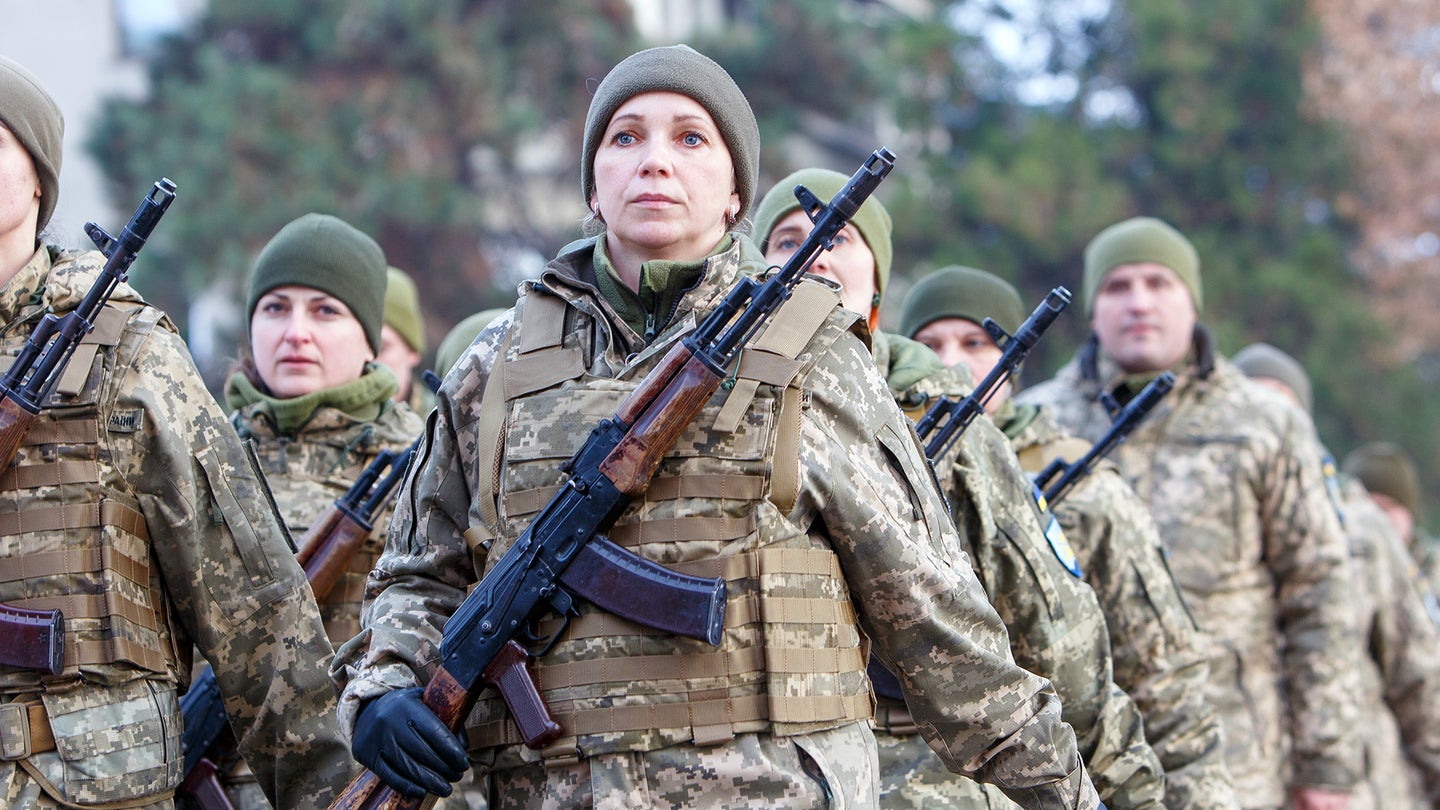 Soldiers armed with rifles march during a Dec. 28, 2021 welcome ceremony upon the return of the 128th Separate Mountain Assault Zakarpattia Brigade from the area of the Joined Forces Operation (JFO) in the east of the country, Uzhhorod, western Ukraine. (Serhii Hudak/Ukrinform/Future Publishing via Getty Images).
SHARE

It was not so long ago that women in Ukraine were fighting for equal rights in the military. Now, women throughout the country are proving themselves a critical part of the battle against Russia.

According to CNN, 15% of the soldiers currently fighting Russia are women. Some are not officially members of the military, CNN’s Christina Macfarlane said, but have taken “crash courses” in things like how to shoot a firearm.

Kira Rudik, a Ukrainian Parliament member who decided to remain in Kyiv, told Macfarlane it’s a privilege that women have the choice to support the Ukrainian military and are not being told to leave with their children. “We are fighting right now by our own choice,” she said, adding that she believes the numbers are higher in terms of how many women are serving. While 15% of the soldiers may be women, there are even more women fighting in resistance groups.

“I think the numbers are actually higher in terms of women fighting right now in the army, and fighting Russians everywhere they can,” Rudik said.

While women are finding no shortage of ways to support their country against Russia, it wasn’t until recently that women were even given equality in the military. When Russia invaded in 2014, many women fought for Ukraine “as volunteers,” according to UkraineWorld, while “men were mobilized to the frontline.” Though they served in combat roles, on paper they were classified “as seamstresses, cooks, or other non-combat vocations,” Defense One reported in 2019.

And because of that, the women who volunteered “often found themselves outside legal protection,” according to the Invisible Battalion, an advocacy group for Ukrainian servicewomen, that studied women’s roles in the war against Russia. They also could not access “adequate social security,” or receive military awards for their service.

“Their participation in the war went unnoticed and underestimated,” the Invisible Battalion’s website says.

The fight for equality resulted in a new law in 2018, which “provided women access to all military ranks and positions, equal responsibilities and rights in military service,” according to UkraineWorld, except for when it interfered with legislation “on maternity and childhood protection.”

One woman who served as a sniper in the Ukrainian Armed Forces, told UkraineWorld that without the 2018 legislation in place, she would “not have been able to “hold the position of commander of a self-propelled artillery platoon from 2018 to 2020.” In 2019, that equality was pushed a little further when women began being allowed into military colleges, according to the Christian Science Monitor.

Even so, there have been problems. Just last year the Ukrainian Ministry of Defense determined that female soldiers marching in a military parade celebrating independence from the Soviet Union would wear high heels, not boots. The decision “angered a number of lawmakers,” according to CNN. It was criticized as sexist and called “a disgrace.”

One lawmaker said it was “hard to imagine a more idiotic, harmful idea,” and that women in the military “do not deserve to be mocked.” In the wake of the backlash, the Ukrainian Ministry of Defense announced that women would simply be given “more comfortable” heels to march in.

If there was any lingering doubt that women were not a serious part of the fighting force against Russia, it has been quickly disproven since Russian forces invaded Ukraine two weeks ago.

“Women have the same reasons as men for joining” the military, one soldier, Nadia Babych, told the Christian Science Monitor. “We want to keep Ukraine free.”

But it’s not just those who have stayed behind to fight that are making an impact. CBS News’ Christina Ruffini reported that women were “acting as couriers” at the border of Poland and Ukraine, helping bring civilians to safety and then turning around and driving supplies to the frontlines in Ukraine.

And in many cases, women are shouldering the responsibility of getting their children — and others’ children — out of the country, now that men considered to be of fighting age are barred from leaving. Christina Macfarlane with CNN mentioned one woman who crossed the border into Hungary with another man’s children, because he could not leave the country, and “safely delivered them to their mother.”

Rudik told CNN that it’s about women deciding where they can be the most useful, and make the most impact against Russia.

“I am the most useful here, where I can bear arms and I can motivate others to do the same,” she said. “I can make sure that Putin has much more people to fight than he originally thought that he would have, because along with Ukrainian men there are women who are standing up, bearing arms, and adding to these numbers.”

Russia
Ukraine
Women in the Military