Russia’s war in Ukraine is far from over

“Of course, we have stopped them, but now the real hard task begins,” a senior Ukrainian officer told me. 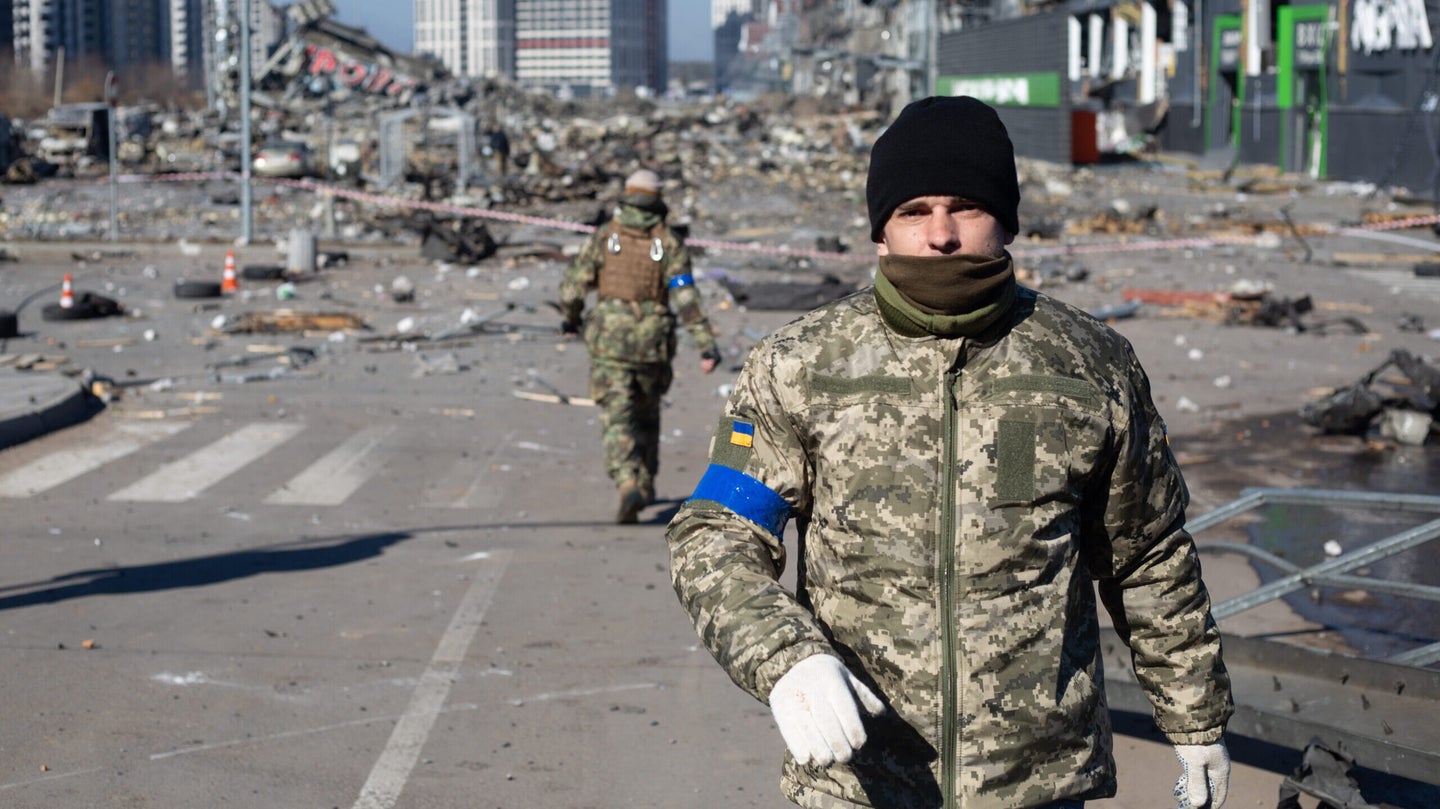 KYIV, UKRAINE - MARCH 21: Ukrainian servicemen are seen at the explosion site as a result of a rocket strike into the shopping mall on March 21, 2022 in Kyiv, Ukraine. As Russia's advance on Kyiv has largely stalled, the Ukrainian capital has continued to be hit by missiles and shellfire. More than three million people have fled Ukraine since Russia launched its large-scale invasion of the country on Feb. 24. (Photo by Anastasia Vlasova/Getty Images).
SHARE

KYIV, Ukraine — Kyiv is a different place this morning. News of the announcement by the Russian defense ministry that the capital is no longer the Russian army’s main objective has spread fast. Indicators are everywhere that the collective mood in the city has lightened overnight: a single café has opened up down the road from my apartment and is dispensing croissants and hot coffee to patrons. The park below the window where I am writing is full of people walking their dogs (pet owners, along with the elderly, were one segment of the population now overrepresented in the city. The prospect of leaving their dogs to the Russians was enough to eclipse fears for their own safety).

“Of course, we have stopped them, but now the real hard task begins,” a Ukrainian general told me yesterday. The senior officer is tasked with forming and leading the resistance movement across the entire country.

There are solemn reminders here that Russian troops still remain on the outskirts of the city and show no signs of full-scale retreat. Sirens continue to wail several times an hour and the rumble of artillery is clearly audible in the city center. Ambulances — often makeshift vans bearing white flags — dash through the streets. On the way back from the café this morning, I passed a group of women clad in medical garb. All looked exhausted and glum. Two were in tears.

The Ukrainian general knows that stopping the Russians is quite a different prospect from rolling them back from the gates of the city — and indeed from the entire country, as is his mandate. The men and women under his command are an eclectic mix of special operators and spontaneous partisans who commute to war in small squad-sized teams (which we veterans of the U.S. military, with our love for a dramatic turn of phrase, would call “Hunter Killer Teams”). Guided by locals, the Ukrainians move easily through Russian lines and ambush Russian armored columns, using the handful of anti-tank missiles they have left.

“We moved around for about three days and just kept ambushing groups of tanks and BTRs,” said the general’s deputy commander, a hawk-faced colonel with a background in the Azov — a heralded, some might say notorious, special operations unit. “Killed maybe a hundred of them,” he told me, smiling benignly as though discussing paintball.

Like most Ukrainian soldiers I have spoken with, he has a story about the enemy’s morale. After one engagement in which his team destroyed several Russian vehicles, hatches flew open up and down the column and Russian soldiers emerged with their hands up. As they climbed out of their vehicles, the colonel was surprised to see that they wore Soviet-era high boots and used outdated equipment.

“We are a small team, I cannot take prisoners,” the colonel said as he leaned towards me, and I dreaded hearing what I thought was coming next. But, laughing delightedly at the expression on my face, he held up his palms towards me in a gesture of reassurance.

“These are kids, maybe 19, so I tell them [to] give us your weapons, and then I point behind them and say, ‘go home to Russia,’ and we left them there.”

When I asked him if he thought that the Russians were on the ropes, he quickly became serious. “Victory means no Russians left in Ukraine – anything less is defeat,” he reminded me. “Only then do we celebrate.”

No one here thinks that day is near. The Ukrainians believe they cannot compromise as long as there are Russians left on Ukrainian soil, including areas of Donetsk and Luhansk that Moscow has controlled since its incursion in 2014. This is more than an understandable emotional response to what the Russians have done to the Ukrainians: If they don’t retake these areas, Putin is able to portray the war as a sum gain. Those who think this is not possible because of the scale of Russian casualties are not paying attention to aspects of Russian history, politics, and culture which make it entirely possible that the catastrophic effect that this war has had on the Russian army will simply be buried.

Russian morale is rock bottom, but they are adapting. As they dig in, they resort to laying reams of mines alongside roads and around their positions. The Ukrainians, who lack mine-clearing equipment, find themselves now unable to get close enough to use some of their much-vaunted anti-tank systems. The British-made NLAW, for instance, which has done sterling work throughout the campaign so far, has an effective range of only 500 meters in the hands of a good gunner (this despite what the manuals say, since feedback from the field is just that).

Assets such as small drones, which are regarded as being de rigueur for effective small unit operations in the U.S. military, are in short supply here – and the ones that the Ukrainians possess are vulnerable to Russian interference. Ukrainian soldiers use their cell phones to communicate because they don’t have secure radios – and by doing so make themselves a target for Russian artillery. They drive their own cars to the front because official vehicles are not available. A fleet of Toyota pick-ups with cross-country capability would make all the difference, the colonel told me, assuming as so many here do that because I am an American I have easy access to such things.

Despite stories in the media that appear to indicate that the Ukrainian military is now one of the best equipped and supplied armies in the world thanks to Western largess, bureaucratic and logistic difficulties plague the equitable distribution of badly needed assets. And everything the Ukrainians need costs money – something that they simply don’t have. A friend of mine, an American who has lived in the city for some 30 years, runs one of the leading non-government organizations devoted to the defense of Ukraine, and yet has amassed a paltry $400,000. That will buy exactly two of the mid-range drones requested by the general with whom I spoke.

To the south and east, as a stark reminder that the war is far from over, Maripol continues to be battered amidst scenes of collective misery that haven’t been seen in Europe since the Second World War. Two days ago, a Ukrainian officer told me that soldiers defending the city were reduced to taking ammunition off the bodies of dead Russians. If – as appears likely – Mariupol falls, the Russians will have seized a key port in the Black Sea and consolidated their hold on the region inland from Crimea. By then moving north, they have the chance of completing the annexation of Donetsk and Luhansk – a move that could indeed be trumpeted by Putin as being a “better-than-previous” status quo.

If this happens, ten Ukrainian battalions, currently holding the line East of the Dnieper river, run the risk of being cut off. Can the Russians do this with the heavily depleted units in the country, plus the 16 extra battalions (13 of them comprising conscripts) that are being rushed to the area of operations? It’s impossible to say of course, but they will certainly try to complete this encirclement before the Ukrainians can stop them.

Sir Basil Liddell Hart, a British military historian, famously said, “the purpose of war is to make a better peace.” No one can fault the Ukrainians for wanting exactly that. All of which is to say, that while Kyiv may no longer be center-bullseye — a development for which I am personally grateful — no ceasefire that acknowledges Russian gains will lead to long-term peace. History has shown that Putin uses compromise to his advantage, as he did after the annexation of Crimea in 2014. And while there are Russian boots on Ukrainian soil and Vladimir Putin remains in power, Ukraine remains in danger.