Russian forces face two choices in Kyiv. Both will be bloody and costly

The city is eerily empty as the Ukrainian army tries to sweep the streets clear of infiltrators. 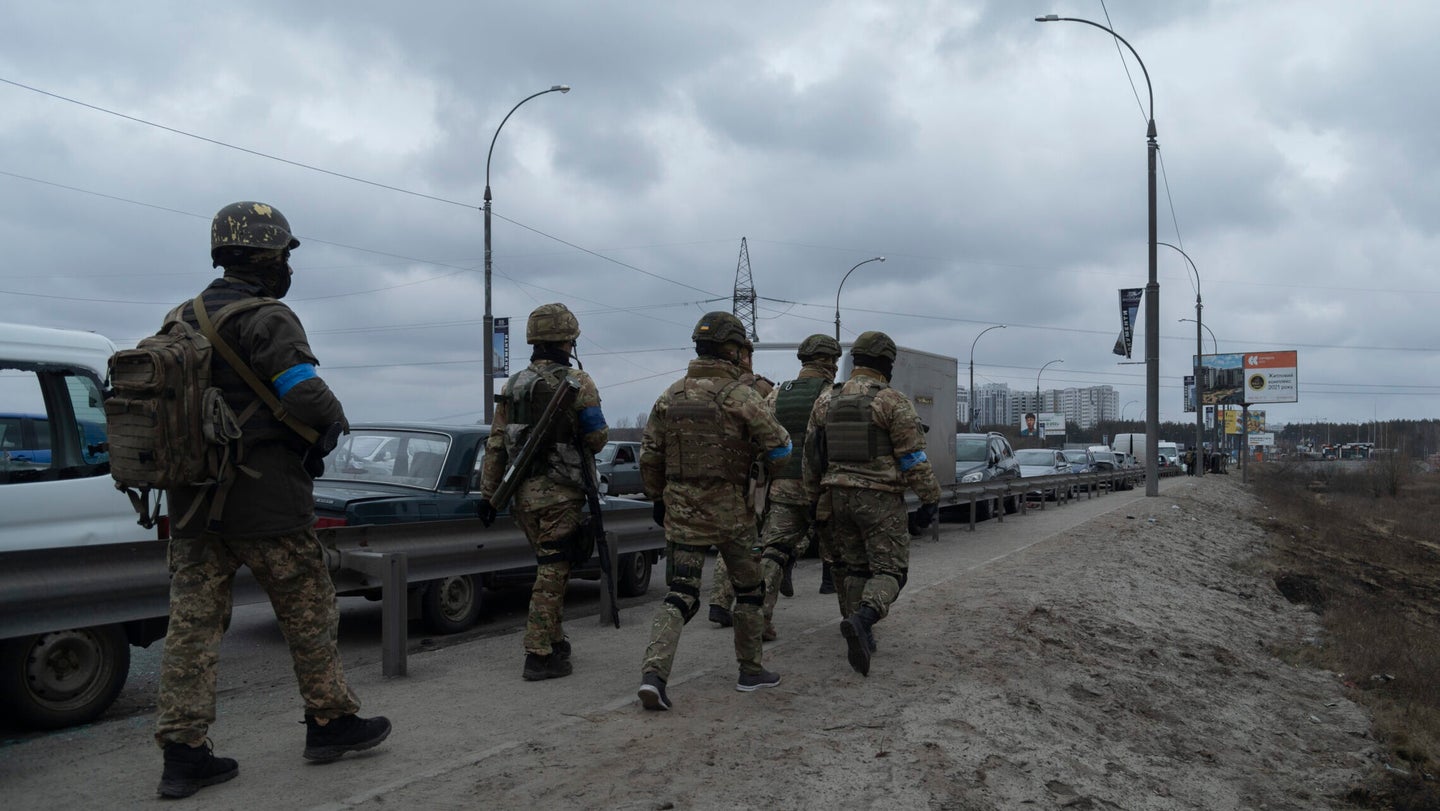 Ukrainian soldiers walk toward the frontline in Irpin, 20 km from Kyiv, on March 13, 2022. Russian forces continue to attempt to encircle the Ukrainian capital, although they have faced stiff resistance and logistical challenges since launching a large-scale invasion of Ukraine last month. Russian troops are advancing from the northwest and northeast of the city. (Andrea Filigheddu/NurPhoto via Getty Images).
SHARE

KYIV, Ukraine — A looming battle for Kyiv is set against a backdrop of wailing sirens and scattered gun battles as tens of thousands of Russian soldiers converge on the city from the north and west, while small groups of Russian special operators infiltrate the city center. The crump of incoming missiles could be heard intermittently throughout the city on Monday night, some close enough to rattle the windows of the apartment in which I am staying. The population has been ordered to remain in their homes so the Ukrainian army can sweep the streets clear of infiltrators, and the city is eerily empty.

It’s certainly not safe here, but from a perspective of personal risk, I don’t feel reckless in staying. Despite media reports on Tuesday morning that the Russian army is only 15 miles from the center of Kyiv, there is no indication that they have broken through Ukrainian lines. And although my presence here has sparked understandable concern among family and friends, I feel quite comfortable making the decision to remain – at least for the time being. I am confident that the Russians will not be able to take Kyiv, no matter how hard they try – so confident that I would literally stake my life on it. This is by no means blind faith. Even if the city was undefended, the Russians lack the manpower in their battalion tactical groups to secure a city of over 300 square miles and half a million structures, a city that housed a pre-war population of four million.

Urban combat consumes a massive amount of manpower, even before casualties. A good rule of thumb is that an infantry battalion can seize three to four city blocks of two to three-story structures at a time. The Iraqi city of Fallujah was, in 2004, less than a tenth the size of modern Kyiv. And still, even with the full weight of U.S. firepower behind them, it took almost 14,000 troops and two months to cordon and clear the city of insurgent defenders numbered in the low thousands. During the battle for Mosul in 2017, it took Iraqi security forces, backed by U.S. and coalition fire support, nine months to wrest a city with a population one quarter that of Kyiv.

As the Russians move into the city, they will have to strongpoint every block – leaving units behind in order to prevent Ukrainians from infiltrating back into the area. The only other alternative will be to force corridors into the center of the city to seize key objectives — a tactic used to good effect by the Israelis in Gaza and by U.S. forces in seizing Baghdad. But such an approach exposes the attacker’s flanks and is only likely to succeed if they have numerical superiority and limited objectives. The Ukrainians will continue to launch distributed small unit counterattacks, a tactic ideally suited for a city this large.

Even if the Russians were top-notch soldiers without the problems of logistics and command and control that have plagued them since the war began, this would be a long and bloody fight. Russian tactics, however, have not been impressive, with mechanized infantry appearing reluctant to leave the false safety of their vehicles — a practice that will equate to collective self-immolation in a city offering endless sanctuary for anti-tank rocketeers.

Aside from the physical scale, significant human factors come into play during urban combat which imposes a particularly heavy toll on the psyche. At the outset of the battle of Fallujah, I felt confident and well prepared – and yet within a week, I was close to exhaustion. I was by no means alone in this regard, and we had to rotate U.S. advisors on my team to the rear for a break every few days. Russian morale, by all accounts, is already abysmally low — no state in which to begin a prolonged urban battle. Awaiting them now are tens of thousands of locally recruited Ukrainian soldiers, fighting on their home turf with their homes at their backs, defending a city that is iconic to their national identity.

Russian President Vladimir Putin is faced with two unenviable choices: To cordon the city and starve it out, or to attack into Kyiv itself, thus beginning an urban brawl the scale of which hasn’t been seen since the Second World War. Both options will inflict misery on the civilian population, and exact a heavy toll on both sides. But that ascetic phrase doesn’t do justice to the scale of devastation that this battle is likely to cause. The Russian attack on the Chechen city of Grozny resulted in an estimated 25,000 to 30,000 deaths, roughly 6% of the city’s population.

Putin’s military commanders will likely be advising him not to attack Kyiv, but instead to surround the city and then seek to pummel and starve it into submission. Even this, however, won’t be easy. Kyiv has the most capable air defense system in the country and has been shooting down most incoming missiles faster than the Russians can replace them. The capital is ten times the size of Mariupol – the port city that the Russians have besieged and devastated now for two weeks. It has a fresh water supply in the Dnieper river that runs through its center, and there are wells interspersed throughout the city. Even if the Russians are successful in cutting off the corridor that leads to Lviv in western Ukraine and thus to the outside world — current food stocks are sufficient to last, I am told, several months.

As always in war, fortunes can change dramatically. The Russians might, as the Ukrainians warn, launch an attack from Belarus directly toward the capital, destroy key nodes in the Ukrainian air defense system, or, as the U.S. fears, use chemical or biological weapons. But barring these contingencies, the Ukrainian defenders in Kyiv can hold out indefinitely. The question is at what cost — and that’s a question that only Putin can answer.

Correction: A previous version of this article mistakenly estimated the size of Kyiv using kilometers instead of miles.