Attacking it is a more complicated question 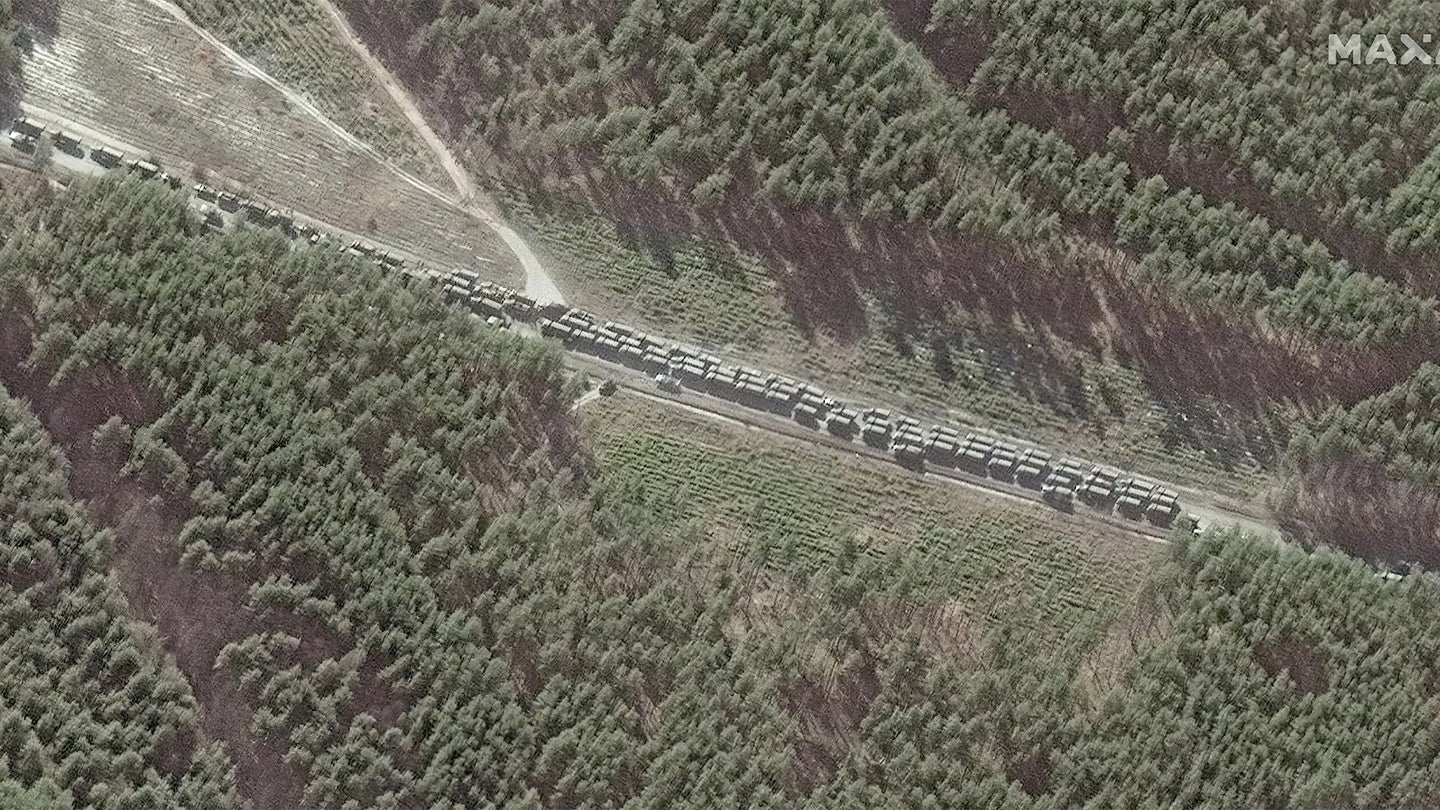 Maxar satellite imagery from February 28 of the northern end of the convoy with logistics and resupply vehicles, southeast of Ivankiv, Ukraine. (Maxar Technologies/Getty Images).
SHARE

With the Russian invasion of Ukraine now past the one-week mark, fighting has continued to escalate. In the south, Russian forces have taken control of the city of Kherson. Further north, Ukraine’s second-largest city of Kharkiv and its capital of Kyiv have been under air and artillery strikes. The Russian advance, however, has been slowed by stiff resistance and apparent logistical woes.

Perhaps nothing has come to represent that more than the convoy of Russian vehicles strung out along various sections of a roadway north of Kyiv, at times stretching out to 40 miles in length.

On Wednesday, Pentagon spokesman John Kirby said that the Russian column had “not made any appreciable progress, geographically speaking, in the last 24 to 36 hours,” and described the Russian advance as “stalled.”

Experts and observers have focused on two probable reasons for the delay: logistics and a needed pause for Russian forces brought on by stiffer than expected Ukrainian resistance before they begin the next phase of their advance.

“It reflects the fact that this invasion was in fact poorly planned, poorly, poorly prepared, and is being poorly conducted,” Frederick W. Kagan, director of the Critical Threats project at the American Enterprise Institute, told the New York Times on Tuesday. “That column reflects, in part, Russia scrambled to adjust to problems that they had created by the way that they prepared and conducted this attack.”

“We do believe that they have experienced logistics and sustainment challenges – that we don’t believe they have fully anticipated,” said Kirby on Wednesday.

From Operation Market Garden to the so-called “Highway of Death” during the Gulf War, it doesn’t take a tactical genius to know that hundreds of vehicles strung out over dozens of miles of road does not represent sound military strategy. This is especially true as muddy conditions on the ground are making it harder for tanks to operate in the open.

Those vehicles, some spread far apart from one another, and some reportedly packed two and three abreast, remain vulnerable to attack from their flanks and from the air unless there is an aggressive defense effort to protect the entire corridor. Vehicles that have run out of fuel block the roadway and require recovery. And reassembling and reorganizing units in the aftermath presents its own set of time-consuming logistical challenges.

Despite the logistical challenges Russian forces have faced, and the success Ukraine has already had in striking Russian armor, attacking what seems like such a large target may be more complicated than it looks.

“We’ve seen that Ukraine has been very effective with their drones, especially the Bayraktars [Bayraktar TB2], but those are a limited resource,” said John Amble, editorial director of the Modern Warfare Institute at West Point. “You don’t want to risk them unless it’s a priority target, which right now is artillery that is shelling those cities.”

There is also a weather factor. With cloudy skies having blanketed the area over the convoy at the beginning of the week. In those conditions, the Bayraktar drones are limited in their effectiveness. In 2020, during fighting over the city of Shusha in the Nagorno-Karabakh war between Azerbaijan and the Armenian-backed Republic of Artsakh, separatist forces were able to mount their most successful counter-attacks during foggy weather, when Azerbaijan’s use of the Bayraktar drone was effectively negated.

Amble also noted that Russian forces are almost certain to be learning and adjusting their tactics, and may be integrating air defense assets with their convoys, making them an even riskier target to attack.

In other words, when outmanned and outgunned, and with limited resources, it may not be worth it for Ukraine to launch a large-scale attack on the convoy, however vulnerable it may be.

However, a report from Military Times on Wednesday suggested that Ukrainian aircraft had successfully struck the convoy. The strikes were reportedly carried out by Ukrainian warplanes, Su-24 and Su-25 fighters, and included artillery.

“We are striking the enemy’s columns,” said Brig. Gen. Kyrylo Budanov, according to Military Times. “We burn many columns of the enemy.”

During the 3 p.m. Pentagon press briefing on Wednesday, Kirby stated that there were only unconfirmed efforts by Ukrainian forces to hamper the convoy’s progress toward Kyiv.

“We have some indications that the Ukrainians have, in fact, tried to slow down that convoy,” Kirby said, adding that “we have no reason to doubt those reports; but again, we can’t speak to it in great specificity.”