The Army's 'pink and green' uniforms will arrive in the hands of new soldiers by 2021, with recruiters and drill sergeants expected to receive the World War II-era throwback uniform by the end of the year 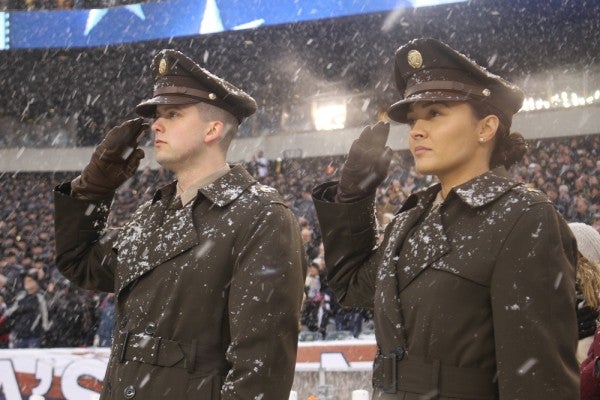 The Army's 'pink and green' uniforms will arrive in the hands of new soldiers by 2021, with recruiters and drill sergeants expected to receive the World War II-era throwback uniform by the end of the year.

The news was first reported by Stars and Stripes' Christian Lopez, who writes that the iconic dark green jacket and pinkish-brown trousers will be issued to soldiers graduating basic training next year.

According to an Army news release from 2018, the uniform will be “cost-neutral” for enlisted soldiers, meaning they will be able to purchase them from their annual uniform allowance.

Soldiers will have until Oct. 1, 2027 to make the switch over to the new uniform, reports Stars and Stripes.

Drill sergeants and recruiters can expect to get their hands on the uniform within the final quarter of the 2020 calendar year, according to Stars and Stripes.

To date, some 850 sets of pink and greens — or 'Army greens,' depending on who you ask — have been issued to soldiers in public facing roles, such as recruiters, some senior leaders, the Army band, and the Old Guard, according to Stars and Stripes.

In 2019, the service issued pink and greens to 200 recruiters as a trial run to see how they were received, Army Times reported in February 2019.

It makes sense. After all nothing helps a recruiting pitch like pointing to your uniform and saying “hey, if you enlist, you get to wear this.”

Doubt it? Just ask the Marines about their dress blues.