“I’m just a soldier, just like any other one." 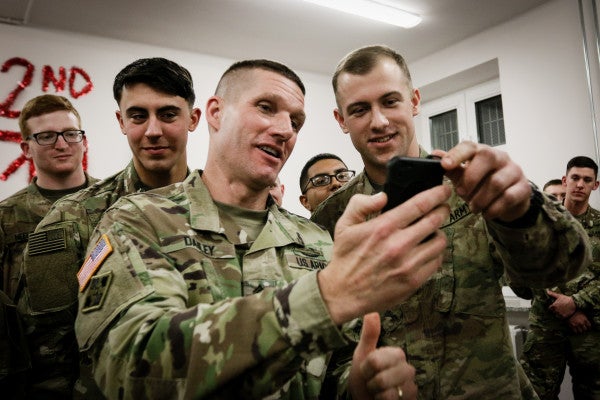 Even in the middle of a global pandemic, former Sergeant Major of the Army Daniel Dailey seems calm, cool, and collected.

At least that was my take-away from our conversation last week — an interview that had originally been scheduled to take place at the Association of the U.S. Army meeting in Huntsville, Alabama, before the conference was cancelled amid the spread of the novel coronavirus (COVID-19) that has resulted in quarantines around the country, and spurred a toilet paper crisis.

“I’m one of those people that, you know, you can’t overreact … But I don’t get the toilet paper thing,” he told me. “Every place I’ve been it’s completely wiped out. To me, that wouldn’t be my first priority. I don’t get it.”

With AUSA cancelled, we connected over the phone on Wednesday. You’d think being newly-retired would mean a slower pace, a slower schedule. But that didn’t seem to be the case for Dailey, who in the time that we spoke got two calls and several emails.

You needn't look further than the (unofficial) Army reddit world to get the impression that Dailey was relatively well-liked among the force. Last year, a post announcing the new SMA, Michael Grinston, brought out the…sensitive side of some soldiers.

“I'm gonna put in my two week notice when my boy Dailey leaves,” another posted.

“Do…do we still get to have the Pinks and Greens Papa Dailey promised?” Another asked, referring to the new uniforms that were first floated in 2017.

There was even a rumor that Dailey was actually the editor of the popular U.S. Army WTF! Moments page, though he put that to rest.

“I simply wouldn’t have had the time,” Dailey said on Wednesday, laughing.

Much of his popularity can likely be traced back to one of his first big decisions as SMA. In his first weeks on the job, Dailey tackled an issue a lot of soldiers took very seriously: The service's tattoo policy.

There was an “an extreme amount of angst” about the policy at the time, which restricted the size and number of tattoos a soldier could get, and forced them to get them documented. Dailey said immediately upon taking over as SMA, that angst was directed towards him, and he knew he had to do something about it in order to boost morale in the force.

“I walked to the chief and the secretary and I said ‘Gentlemen, we’ve got to change this,’” he said. “I said it’s not worth the morale issue we’re having in the Army, and to be very frank with you, I don’t see a problem with it, as long as they’re appropriate, you know? … So I said to the secretary, ‘I want to change it.’ He said ‘Okay.’ He just looked at me and said okay. I said, ‘Really?’ He was like ‘Yeah.’”

Dailey announced the change, and shortly afterwards was speaking to soldiers at an installation town hall when he was asked if he himself had a tattoo. He didn’t, Dailey answered, and jokingly asked the soldier what he should get.

That was all it took. The idea grew, and turned into a contest run by Army Times — ”what should SMA's tattoo look like?”

Dailey said he received over 200 tattoo submissions from soldiers; some were huge, wrap-around-the-body designs. Others were more thoughtful submissions centered around his wife and son. There was even a group offering to pay for Dailey’s flight out to their shop, and a tattoo, if he got it from them.

It was Dailey's busy schedule that kept him from getting one, he said — and that still appears to be the issue — though he told Task & Purpose he still might. Probably not from the submissions soldiers sent in, he joked, since some of those are probably out of his price range.

Along with tattoos, other popular changes were initiated under Dailey, like allowing black socks with PT uniforms, and headphones in the gym.

“Why can't you wear your headphones in the gym?” he said, per Army Times. “That's just silly.”

So it comes as no surprise that soldiers were hoping he might rock the boat a little more, and sign off on beards in uniform.

“If they allow beards I'm re-enlisting,” one Redditor said in 2017.

That never happened; Army regulations still say that beards are not authorized. But Dailey isn’t personally opposed to beards, he explained on Wednesday — he’s just opposed to you having one while you’re in uniform.

And in case you were wondering, he did the (global, very extensive) research to back it up.

“I actually spent a lot of time calling all my Sergeant Major of the Army friends out there. A lot of European armies out there allow beards in uniform, I talked to them — British SMA, the Norwegian SMA, the Swedish SMA, Romanian, the Israelis,” Dailey explained. “Actually, when I went to Israel I went and … talked about beards and challenges and issues, and had a lot of long discussions about it, and bottom line is, it poses a threat to our soldiers on the battlefield. There’s … data to prove it’s very difficult for the seal on a protective mask. It creates some, today less risky than previous years, hygiene issues.”

But the job of SMA is, of course, more than beards, tattoos, and snazzy new uniforms.

During Dailey's tenure, the privatized housing issue erupted when Reuters posted its explosive “Ambushed at Home” investigation in 2018; in the same year, the Army missed its recruiting goal for the first time in over 10 years; not to mention that trends for things like sexual assault, harassment, and suicide in the service weren’t showing noticeable improvement.

One of the programs he mentioned was the Not In My Squad initiative — something started in 2015, which SMA Grinston has transitioned into This Is My Squad.

“It just to remind the small unit leaders, the squad leaders, that they're responsible for those young men and women 24 hours a day, day-in and day-out,” he said. “And that's coaching them, guiding them, teaching them, protecting them, educating them on what is right and wrong.”

But the hardest part of the job, he said, was meeting families at Dover Air Force Base for a dignified transfer of their loved one who died overseas.

“The cost of war is real when you have to get on a helicopter and go to Dover. And it’s real to the families that you look in the eye, and you can’t replace their son or daughter,” he said. “It reminds you of the true cost of what we do … You can’t replace what they’ve lost. There is no replacement for that.

“Sometimes you just hold them, and you listen, and remind them that their service was for a purpose.”

At the end of the day, after four and a half years on the job, the biggest takeaway Dailey says he learned during his SMA tenure is simple: Humility is key.