“I’ll be honest with you, collectively we’re struggling with how to deal with this.” 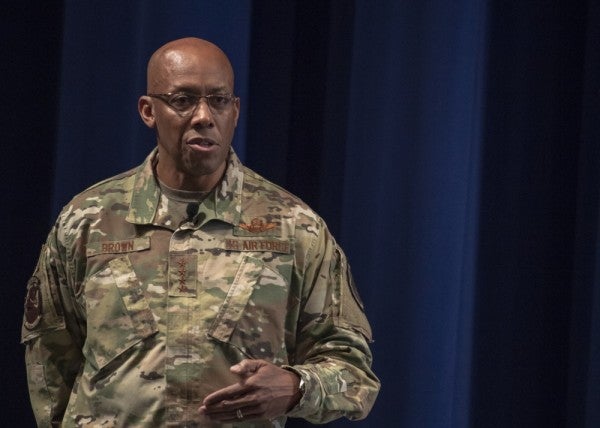 The top general in the Air Force says his branch is on track to see the same number of airmen commit suicide in 2020 as it did in 2019, a record-breaking year that prompted the service to take a tactical pause to consider the problem and what could be done to solve it. The solution, however, is still a long way off.

“From a suicide perspective, we are on a path to be as bad as last year,” said Gen. Charles “CQ” Brown in a virtual presentation for the Air Force Sergeants Association on Wednesday. “I’ll be honest with you, collectively we’re struggling with how to deal with this.”

An Air Force spokesperson could not give a number on how many airmen have died by suicide so far in 2020, but briefing slides leaked by the popular Facebook page Air Force amn/nco/snco in February showed that 137 airmen and Air Force civilians died by suicide in 2019, a 33% increase over the previous year.

Brown said the novel coronavirus (COVID-19) pandemic has created “additional stressors and really fear of the unknown for certain folks.” However, the general said most Air Force suicides are based on “relationship issues.”

The general’s comments come just over a year after the previous Air Force Chief of Staff, Gen. David Goldfein, ordered all units to take a day to focus on preventing more airmen from taking their own lives. At the time, 78 airmen had committed suicide that year.

“Suicide is an adversary that is killing more of our airmen than any enemy on the planet,” Goldfein wrote in a July 31, 2019 memo to commanders. “You and I have sworn to 'defend against all enemies, foreign and domestic.' Suicide attacks sometimes with and without warning. Make this tactical pause matter. Make it yours and make it personal.”

On Wednesday, Brown said one problem that persists even when airmen seek help is the lack of anonymity on base.

“It’s very hard if you want to go see the chaplain or mental health, and you just want to keep it private, just need somebody to talk to, and then they’re going to see you at the commissary, at the BX or at the gym,” he said.

Brown isn’t wrong. In a recent op-ed for Military.com, Kathy Roth-Douquet, CEO of Blue Star Families and a Marine Corps spouse, quoted another military spouse as saying “no soldier with career aspirations will reveal true physical or mental health issues under the current system. No one. It is the number one reason we have injured soldiers, chronic pain, and unresolved mental instability, which leads to suicide.”

The op-ed quoted a 2019 Military Family Lifestyle Survey, conducted by Blue Star Families, which found that concerns about potential impacts on a service member’s career were the most common reason for not seeking mental health treatment for those who had seriously considered suicide or had attempted suicide in the past year.

Lawmakers have taken notice of the need for anonymity.

In June, Marine veteran Rep. Seth Moulton (D-Mass), introduced the Brandon Act, which would require DoD to establish a standard phrase for service members to use anonymously to start an immediate mental health evaluation referral without notifying their commands. Roth-Douquet heartily endorsed including the measure in the 2021 National Defense Authorization Act.

While Brown said the Air Force has no new initiatives to help with suicide prevention, he hinted that an Air Force major command is looking into allowing airmen to seek help with chaplains or mental health care providers at other bases. Brown also pointed to telehealth as an option that has grown more popular as a result of people staying socially distant due to COVID-19.

“Our mental health providers are actually staying pretty busy doing that and they can actually see more patients,” he said. “How do we open it up a bit more so we can actually give more tools to our airmen and their families?”

Giving more tools and training to families is a key step, Brown said, because family members often notice when an airman is having trouble long before his or her coworkers do.

“When we go into work we put up a shield, where if you’re having issues you actually don’t share some of the things at work,” he said. “But you’re probably sharing them at home. Your family members may be the ones who can come to you and be able to get you the help or push you in that direction.”