'Our airmen are counting on leaders like me to make a positive impact in their lives ... I owe them my best.' 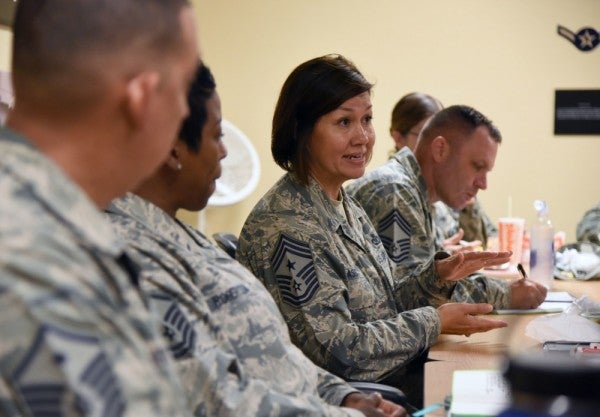 The Air Force made history on Friday by selecting CMSgt. JoAnne S. Bass as its next Chief Master Sergeant of the Air Force. The decision marks the first time in U.S. history that a woman will serve as the top enlisted service member in a military branch.

“Gen Brown knocked it out of the park with this selection,” wrote the outgoing CMSAF, Kaleth Wright, in a tweet on Friday, referring to Gen. Charles Brown, who on June 9 became the first African American to be chosen as a U.S. service chief.

“Proud moment in history,” Wright continued. “Great to be an Airman!”

CMSAF 19 is Chief JoAnne Bass! Gen Brown knocked it out of the park with this selection – Proud moment in history, Great to be an Airman! pic.twitter.com/3MPRYKn5g8

Bass currently serves as Command Chief Master Sergeant for the Second Air Force at Keesler Air Force Base, Mississippi. There she serves as “senior enlisted leader and advisor to the commander on all matters impacting the professional development, proper utilization, and the readiness of the enlisted corps,” reads her command biography.

“I could not be more excited to work side-by-side with Chief Bass,” wrote Gen. Brown in a press release on Friday. “She is a proven leader who has performed with distinction at every step of her accomplished career. I have no doubt that Chief Bass will provide wise counsel as we pursue and implement initiatives to develop and empower Airmen at all levels.”

Bass emerged as the consensus choice from a group of more than a dozen finalists across the Air Force’s global operation, officials said in the press release. The finalists were selected based on their breadth of experience, recommendations from senior commanders, and performance across each candidate’s career.

When they take up their posts later this year, Bass and Brown will face a range of challenges from both within and without the Air Force. From without, they face rising threats from China, Russia and other peer adversaries. From within, they must address the Air Force's suicide and mental health crisis, as well as a newfound effort to address racial disparities in the branch.

Bass specifically will serve as a personal adviser to Brown and Air Force Secretary Barbara Barrett on issues regarding the welfare, readiness, morale and proper utilization and progress of more than 410,000 enlisted members, the Air Force wrote in its press release.

“[Our airmen] are counting on leaders like me, to make a positive impact in their lives,” Bass wrote in a video about her selection. “I owe them my best.”