"This is a big day not just for Muslims, but for persons of all faiths." 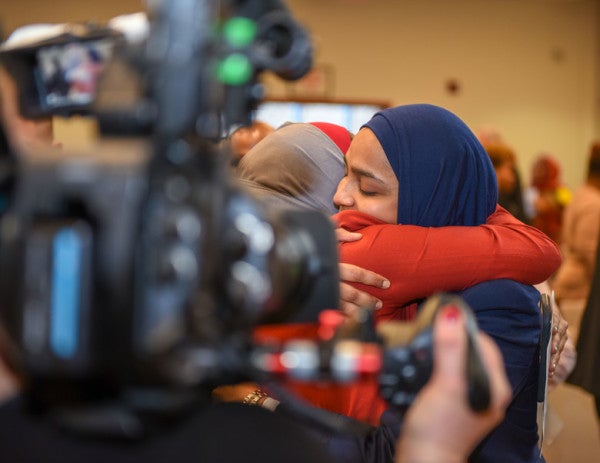 The Air Force made history last month by commissioning 2nd Lt. Saleha Jabeen as the first female Muslim chaplain candidate in the military. Though the commission marks a new chapter in American military history, it is only the latest in a long spiritual journey for Jabeen that started 14 years ago, when she first came to the U.S. as an international student from India.

At the time, Jabeen thought she would earn a Masters of Business Administration and make her mark in the corporate world, Jabeen wrote in a blog post for the Muslim American Leadership Alliance. But after experiencing bigotry and prejudice in the U.S., Jabeen realized she wanted to study Islam to better understand her identity as a Muslim.

“I wanted to learn about my religion so I can own it when I practice it,” wrote Jabeen, who studied inter-religious dialogue at the Catholic Theological Union in Chicago before enrolling at Trinity Christian College for a graduate level education. However, Trinity presented another challenge for Jabeen: how to afford the tuition.

“This left me with two options: self sufficiency or going back to India,” she wrote. “Going back like this to me would mean emotional, spiritual, and intellectual suicide.”

To achieve self-sufficiency, Jabeen followed her older brother into the Army. The military also offered a route citizenship in the U.S., which she had come to know as home. But for Jabeen, self-sufficiency was more than just paying the bills: it was also about embodying cultural change.

“I'm a Muslim woman and I want to live like one,” Jabeen wrote. “This for me meant thriving for self-sufficiency. From my graduate school learning experience, I took away two gems, one of them was – if Islam is to be fully realized, Muslim women ought to be economically independent.

“Being a Muslim woman is not a weakness like the culture would like for us to believe,” she continued. “The only way to change that culture is by being the change itself.”

Oddly enough, Jabeen's path to Air Force chaplaincy started in the Army reserves with the 801st Combat Support Hospital, where her fellow soldiers welcomed the chance to learn from her about Islam.

“Thank you for the study sessions about Islam and for taking deep interest in learning about the cultural sensitivities to be better equipped for your service commitments,” Jabeen said to the soldiers, some of whom were at the commissioning ceremony in Chicago on Dec. 18. “I would not be standing here without your support.”

Now that she's in the Air Force, Jabeen still has to complete her training and be assigned a duty station before she actually becomes a practicing chaplain. Until then, her boss seems to already be very proud of her.

“This is a big day not just for Muslims, but for persons of all faiths,” said Maj. Gen. Steven Schaick, Air Force chief of chaplains, at the commissioning ceremony. “I could not be more proud of our Air Force for being willing to commission and embrace the first female Imam in the Department of Defense.”

But with Jabeen leading the way, that number may soon change.

“To all the girls and young women witnessing this moment … and to everybody who feels inspired at this feat, I want you to know that God has a plan for you and is always with you,” the chaplain-to-be said. “Go be the best version of yourself … don't let anyone or anything stop you.”