A Muslim soldier is preparing to sue the U.S. Army over allegations that her command sergeant major forced her to... 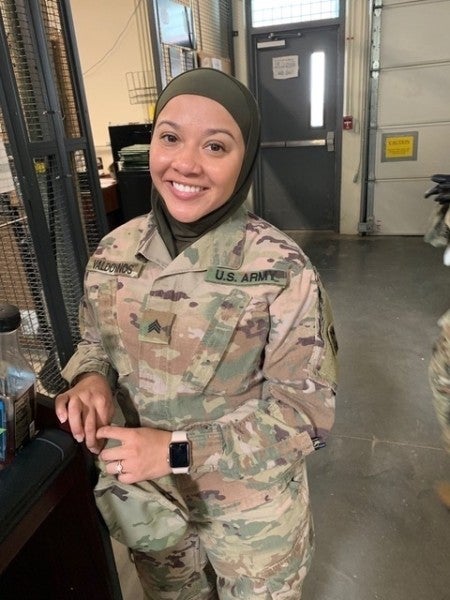 A Muslim soldier is preparing to sue the U.S. Army over allegations that her command sergeant major forced her to remove her hijab.

Spc. Cecilia Valdovinos — a soldier with the 704th Brigade Support Battalion, 2nd Infantry Brigade Combat Team, 4th Infantry Division who converted to Islam in 2016 — was granted permission to wear her hijab while in uniform by her brigade commander, Col. David Zinn in June 2018.

But she told Yahoo News it was quickly met with “'extremely hateful' behavior.”

“I got called a 'terrorist.' I got called 'ISIS.' I hear comments that I'm the reason why 9/11 happened,” Valdovinos told Yahoo. She filed a complaint with the military's Equal Opportunity Office early last month after Command Sgt. Maj. Kerstin Montoya, according to the Army Times, forced her to remove her hijab in front of the other soldiers, saying that her hair was not done to regulation standards underneath it.

“She must have been born on krypton” in order to see Voldovinos' hair through her hijab, said Mikey Weinstein, president and founder of the Military Religious Freedom Foundation (MRFF), which is helping with Voldovinos' case.

Weinstein said in a separate statement that “even if this CSM did have X-Ray vision, our client's hair was neatly tucked beneath her under-cap, completely in accord with Army appearance regulations. This under-cap is part and parcel of her prior Army-approved hijab garments.”

Valdovinos filed a complaint with the Military Equal Opportunity Office which, according to Yahoo, found her claims “unsubstantiated.”

She was later demoted from sergeant to specialist, though Zinn said in a statement he could not get into the specifics about the cause of Voldovinos' demotion. The Army “has not taken any adverse actions against Spc. Valdovinos in response to the wear of any religious garment, her equal opportunity complaint, or the resulting media attention,” Zinn told Task & Purpose.

“The senior non-commissioned officer acted appropriately by enforcing the proper wear of the hijab, in compliance with Army Regulations,” Zinn added.

Army Capt. Brooke Smith, who was reportedly present during Valdinovos' and Montoya's exchange, told Army Times that “pon removing her hijab it was evident her hair was completely down … CSM Montoya told her to get her hair back in regulation and not let it happen again. At no point did CSM Montoya touch the soldier or yell at her (at all or within earshot of other soldiers).”

Weinstein told Task & Purpose that Montoya approached Valdovinos a second time “after the story went viral,” and asked again if her hair was within regulations. Valdovinos replied that it was, according to Weinstein, to which Montoya replied, “I don't believe you,” and told her to go into the restroom to fix her hair. He said that Valdovinos was advised by other soldiers who witnessed the interaction to “go…and pretend to fix her hair.”

Weinstein called Valdovinos' case a “textbook case of racism,” and said MRFF plans to “aggressively make the Army pay for this racism…and harassment.”

The Army started allowing religious exemptions for hijabs, turbans, and beards in 2017, saying that brigade commanders had to make religious accommodations unless the commander believes the requested exemption “is not based on a sincerely held religious belief, or identifies a specific, concrete hazard … that cannot be mitigated by reasonable measures.”

“As a brigade our leaders and myself will continue to support every Soldier's right to file a complaint or to express their grievances openly, freely, and without fear of reprisal when they feel they have been treated unfairly,” Zinn said in a statement.

“We take pride in the diversity of our Soldier teams who work together as professionals regardless of race, gender, ethnicity, religion, or sexual orientation.”

SEE NEXT: A Marine Says Her Religion Exempted Her From Certain Rules. Here's Why She's Wrong