Offutt Air Force Base isn't the only U.S. military installation deluged by the floodwaters that have spread across the Midwest. 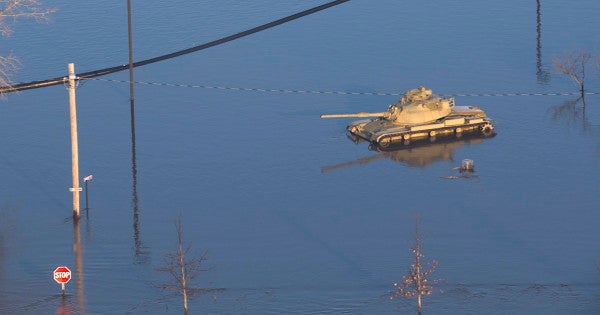 Offutt Air Force Base wasn't the only U.S. military installation engulfed by the floodwaters that have spread across the Midwest.

“I've been in the armed forces for 33 years, 29 with the Nebraska National Guard,” Hynes said. “I've never seen an emergency like this in my time, and nobody I know has ever seen anything of this scope.”

Camp Ashland, established in 1923, is home to several regional training institutes, primarily for motor transport operators (88M) for the National Guard, Army Reserve, and active-duty Army units. It also hosts NCO and OCS/WOCS development schools for Guard, reserve, and active-duty personnel, as well as a handful of training areas on the opposite side of the Platte River.

Around 225 soldiers were evacuated from Camp Ashland as the floodwaters started to rise, Hynes said, while vehicles were moved to higher ground and new floodgates — installed in several of the camp's 58 buildings to the tune of $3.7 million following major flooding in 2015, according to the Omaha World-Herald — were engaged across the installation.

The levees that soldiers had installed ahead of the flooding were “wiped out,” said Hynes. While several buildings that were put on stilts following the 2015 floods had “1.5 to 2 feet of clearance” above the rising waters, everything else was caught in the deluge.

An aerial view of the flooding at the Camp Ashland, Nebraska on March 17, 2019. The levee to the north of the camp broke and water from the swollen Platte River poured thousands of gallons of water into the low-lying area trapping vehicles on the high ground and damaging buildings.

The “bomb cyclone” and resulting floods unleashed throughout the Midwest last week have damaged or destroyed at least 2,000 homes and 340 businesses, Nebraska Gov. Pete Ricketts told NPR News this week. Three-quarters of the state's 93 counties have declared a state of emergency.

The Omaha World-Herald reported on Tuesday the Guard had dispatched a team by helicopter to survey Camp Ashland for damage, but was unable to assess the the total impact of the flooding.

“We can't tell right now because the water is moving so fast,” National Guard spokeswoman Spc. Lisa Crawford told the newspaper. “Due to soldier safety, we can't put anyone on the ground.”

An aerial view of the flooding at the Camp Ashland, Nebraska on March 17, 2019. The levee to the north of the camp broke and water from the swollen Platte River poured thousands of gallons of water into the low-lying area trapping vehicles on the high ground and damaging buildings.

With “catastrophic damage” throughout the state, Hynes said, the facilities at Camp Ashland are of secondary concern.

In addition, handful of Chinook, Lakota, and Black Hawk helicopters stationed in Omaha and Nebraska City are moving sandbags throughout the state and spearheading search-and-rescue efforts.

So far, Guardsmen have rescued 107 people “and 11 pets” by air, Hynes said. In one case, Chinook helicopters airdropped bales of hay for cattle isolated by floodwaters, the first time the Nebraska National Guard had conducted such an operation since 1949.

But with floodwaters swamping nearly a third of eastern Nebraska, the most significant impact of the flooding on the National Guard extends far beyond the borders of Camp Ashland: those Guardsmen whose own homes have been ravaged by the extreme weather.

“The National Guard population itself has been affected by the flooding,” Hynes said. “Your heart really goes out to them … this is the most significant emergency we've ever seen.”

SEE ALSO: 'It Was A Lost Cause' — Dramatic Photos Show Offutt Air Force Base Engulfed By Floodwaters