"Oh man lol someone is having a bad day!" 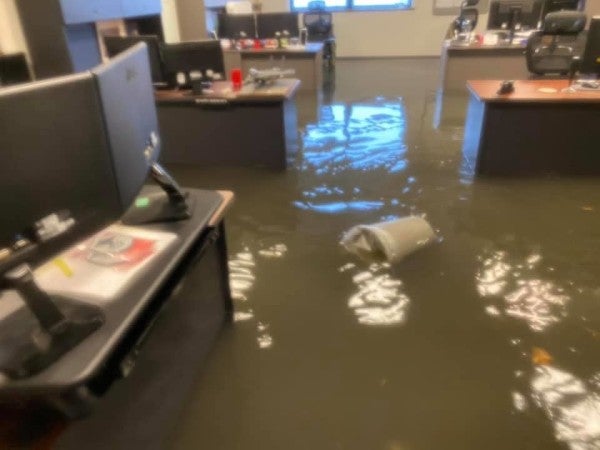 An Air Force base in Illinois briefly resembled a sinking ship on Wednesday when flash flooding sent a deluge of water through offices, across roads, and even into parked cars and aircraft hangars. Nobody was hurt in the flooding as of Wednesday afternoon, though some roads on the base remained closed, said Senior Master Sgt. Thomas Doscher, a spokesman for the 375th Air Mobility Wing.

“Safety of our people is our number one priority, so we’re reminding people please don’t attempt to drive down flooded roads,” Doscher told Task & Purpose.

Base staff began posting updates about the flood on Facebook shortly before noon central time on Wednesday, announcing “flooding throughout the base” and warning followers to avoid certain areas and roads. The base also put out a call for photos of the flood, and soon the page itself was flooded by such images.

“We need a kayak to swim in this river,” wrote one poster who shared a video of the small lake her backyard had become. “Anyone have one we can borrow?”

“You can swim laps on the run track,” wrote another.

Doscher told Task & Purpose that the full extent of the flood damage won’t be known until an assessment is complete, but base staff expected the damage to be minor. When asked about the photos of the flooded office, he explained that some areas of the base were hit harder than others.

As the rain fell, the base staff used Facebook to direct airmen and other workers onto available roads and gates. By about 2:00 p.m., the base wrote that inbound traffic had resumed, though several roads remained impassable.

Doscher explained that many base employees were already working from home due to the novel coronavirus (COVID-19) pandemic, but it wasn’t clear as of Wednesday afternoon if more people would have to work from home due to facility damage.

As the headquarters of the U.S. Transportation Command and the Air Force’s Air Mobility Command, Scott AFB is home to transport and refueling aircraft, including an active-duty C-21 squadron, a reserve C-40 squadron , and a National Guard KC-135 wing. While floodwater entered some of the aircraft hangars, the damage is still being assessed, Doscher said.

The base also experienced a major flood in April 2013, when 5.2 inches of rain fell in 12 hours. At one point during that flood, the base flight line was closed to allow cars to cross the ramp as part of their route off the base, the Air Force wrote at the time. Though airmen had to replace much of the furniture and carpets on the base, one commander said the infrastructure overall survived intact.