Air Force helicopter shot at while flying over Virginia

“The Office of Special Investigations is fully engaged with our FBI colleagues on this incident." 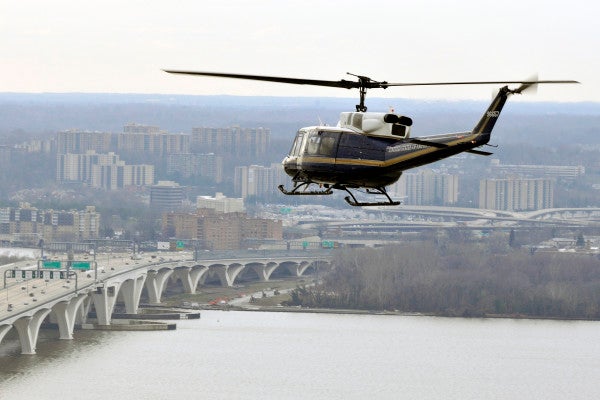 An Air Force helicopter made an emergency landing Monday afternoon after being shot at over Virginia during a routine training mission, an Air Force spokesperson told Task & Purpose on Wednesday.

An airman sustained a minor injury and was later treated and released, the spokesperson said.

The helicopter, a UH-1N Huey assigned to the 1st Helicopter Squadron, was conducting an instrument approach into Manassas airport, the spokesperson said.

The aircraft was about 10 miles northwest of the airport, near Middleburg, Virginia, and was flying about 1,000 feet above the ground.

Though the helicopter was damaged by the bullet, it landed safely, the spokesperson said.

“The Office of Special Investigations is fully engaged with our FBI colleagues on this incident,” the spokesperson said.

“The 1 HS has crews on alert 24 hours a day, seven days a week for a number of different high-level missions,” the Air Force said. “Besides distinguished visitor airlift, the crews are equipped to provide medical evacuation during public events such as the Andrews Joint Service Open House, or assist in maintaining Air Force District of Washington's continuity of operations.”