As if a hypersonic executive aircraft wasn't enough, the Air Force just awarded a contract to develop a supersonic passenger plan that could one day shuttle the President of the United States around the world in the blink of an eye 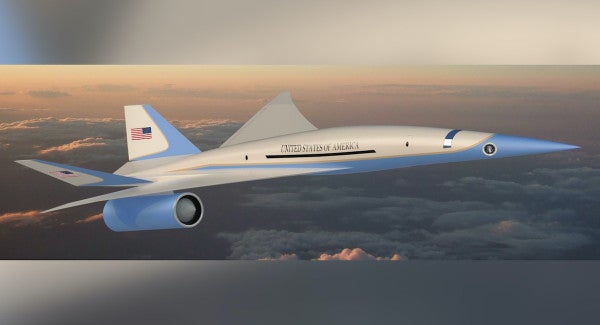 As if a hypersonic executive aircraft wasn't enough, the Air Force just awarded a contract to develop a supersonic passenger plane that could one day potentially fly the president around the world in the blink of an eye.

The Air Force Life Cycle Management Center announced on Monday that the service's Presidential and Executive Airlift Directorate has awarded a contract to California-based start-up Exosonic to develop a “low-boom supersonic executive transport aircraft” for use by “key decision makers and teams.”

Exosonic is currently working on developing a conventional passenger aircraft that can travel at speeds of up to Mach 1.8 “supersonically overland and overwater with a muted sonic boom,” with plans to unveil a prototype by 2025, according to the company.

The contract “will support Exosonic's efforts to develop and modify the company's commercial supersonic airliner to serve as an executive transport vehicle,” the company said.

“These modifications will include reconfiguring the aircraft cabin to include the required accommodations, communications equipment, and security measures that allow U.S. leaders and their guests to work and rest onboard the aircraft.”

Exosonic isn't the only aerospace start-up vying for a chance to supply the future leader of the free world with an ultra-fast aerial transport. The award comes less than a month after the Air Force handed Hermeus a contract to develop a hypersonic aircraft concept for the presidential fleet.

The Hermeus contract, awarded under an Other Transaction For Prototype Agreement Direct to Phase II contract through AFWERX, followed the successful test of the company's vaunted Mach 5 engine prototype in February 2020, Hermeus said at the time.

Hermeus plans to build a demonstrator vehicle over the next five years and a full commercial aircraft in about a decade, company cofounder Skyler Shuford said in 2019.

The Air Force is currently in the process of replacing the current Boeing VC-25A aircraft that serve as Air Force One with the defense contractor's 747-8 to the tune of $5 billion, with plans for the new aircraft to enter service by 2024.