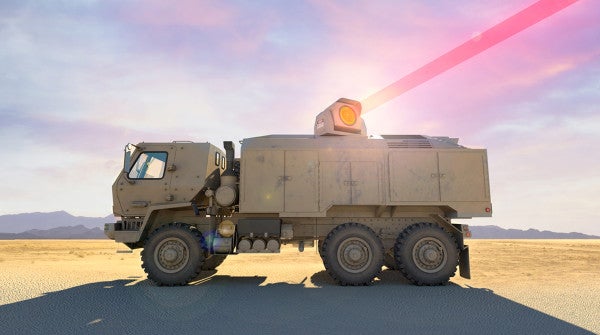 The Army is working overtime to ramp up to output of one of its next-generation vehicle-mounted laser weapon systems.

Initiated in 2017, the HEL-TVD program sought to develop and mount a 100 kw laser on an existing Family of Medium Tactical Vehicles (FMTV) truck to provide a counter rocket, artillery, and mortar (C-RAM) capability, according to a recent 2018 Congressional Research Service report.

In its announcement, Dynetics noted it had formally transitioned from the HEL-TVD program to what's called the Indirect Fires Protection Capability – High Energy Laser (IFPC-HEL) effort, which is designed to deliver four prototype laser weapons to a platoon by fiscal year 2024.

Dynetics was originally awarded a $130 million contract to build and test HEL-TVD in May 2019 and completed a critical design review in early November 2019, according to the company.

According to Dynetics director of strategic program Scott Stanfield, the Army's subsequent January contract modification not only signaled a successful HEL-TVD prototype, but also put the company on track to demonstrate and deliver a 300 kw prototype system by 2024.

“This contract modification proves Dynetics’ agility and responsiveness to warfighter needs,” Stanfield said in a statement.

The ramp-up is big news not just for the Army, but other laser weapons across the U.S. armed forces which are looking to the HEL-TVD prototyping efforts to inform their own directed energy capabilities.

“Under the new directed energy strategy, the Army is leveraging progress made in that effort in order to merge the HEL-TVD with similar technologies in development by the Navy and the Office of the Secretary of Defense,” the service said in August 2019, adding that this partnership “will allow the services to achieve a higher power system … that can protect sites from RAM and [unmanned aerial systems] as well as more stressing threats.”

These efforts could prove especially useful for the Navy, which faces not just the persistent threat of incoming RAM and UAS threats but power generation shortfalls when it comes to the requisite laser output needed to defeat them.

“Even if you take all the other elements of a laser weapon and have them be perfect” – the targeting, the cooling, the beam control — “we still don't have enough power,” as Frank Peterkin, a senior scientist at the Office of Naval Research, put it in a recent CRS report.