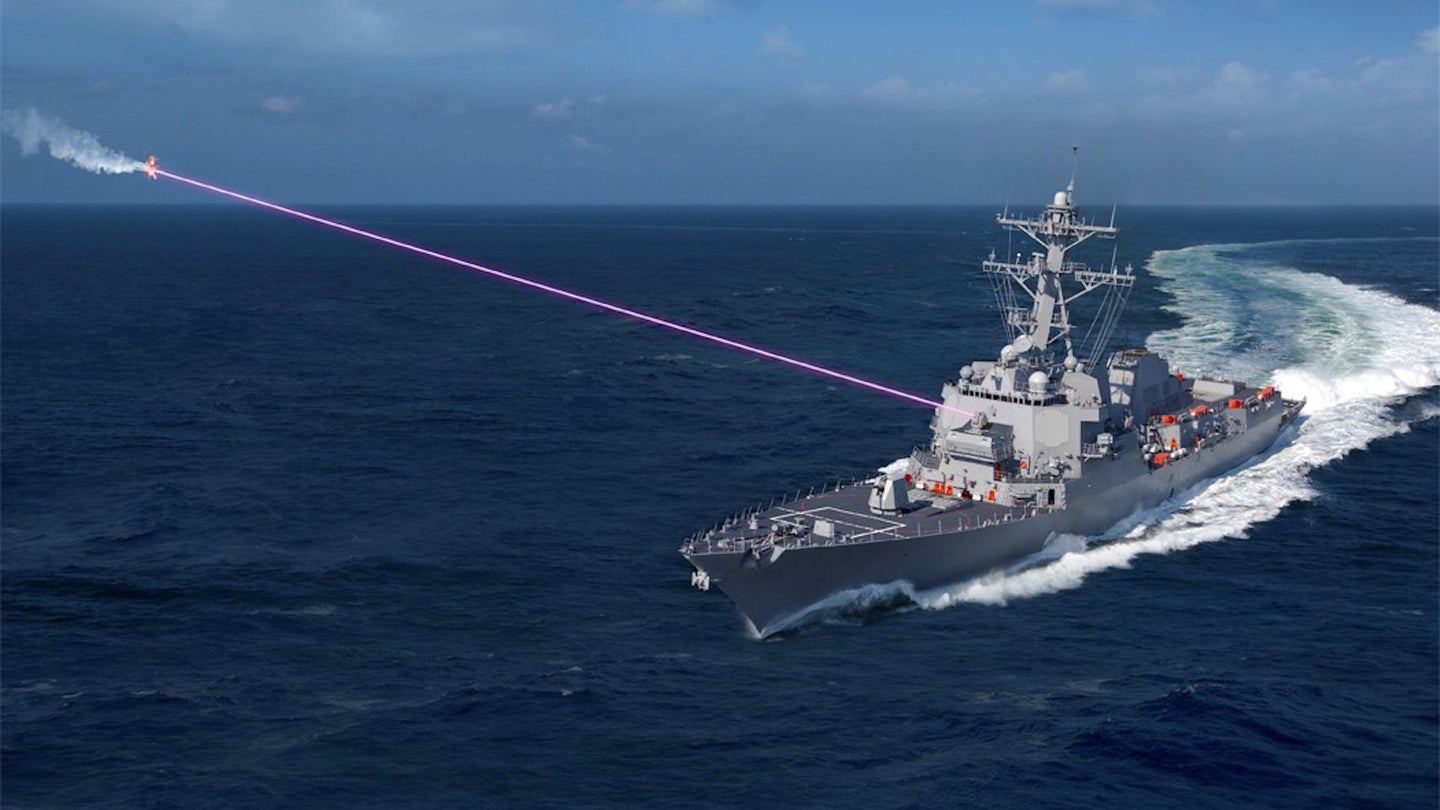 The Navy has now taken possession of a half-dozen new laser weapons for integration onto surface warships, officials said on Wednesday.

Those systems “are now being integrated onto ships,” as National Defense magazine reported from the SNA conference.

Developed under a 2018 contract with Lockheed, the HELIOS consists of a 60-kilowatt laser and optical dazzler package designed to knock out unmanned aerial vehicles, “burn the boats,” and disrupt both airborne and shipborne intelligence, surveillance, and reconnaissance sensors, according to the Congressional Research Service.

The lower-power ODIN laser dazzler provides “near term” capabilities to disorient and neutralize aerial drones and knock out a variety of intelligence, surveillance, and reconnaissance assets, per CRS.

Speaking at the same SNA panel as Okano, Rear Adm. Fred Pyle, the Navy’s director of surface warfare, stated that the service is “going to continue to invest with directed energy to get to those higher levels so we can move beyond self-defense and get into more warfighting missions.”

“Move beyond self-defense” likely means upping the HELIOS from its current 60-kW output to something more in the range of 120 or 150 kW.

News of the Navy’s laser surge may come as a surprise to some observers given that the service accepted delivery of its first HELIOS system just two years ago and showed up installed on the Arleigh Burke-class destroyer USS Preble as recently as August 2022.

But as Janes noted in April, the service’s fiscal year 2023 budget proposal designated its wide-ranging Navy Laser Family of Systems, which the HELIOS falls under, as “an accelerated acquisition initiative to provide near-term, ship-based laser weapon capabilities,” highlighting a push to field laser weapons to surface warships as soon as possible.

Despite this push, it’s unlikely the fleet will see the rapid fielding of lasers this fiscal year: the Navy’s budget request called primarily for further at-sea testing of the HELIOS following the successful integration of the weapon system aboard the Preble last year.

Officials previously stated that the DDG-51’s Flight III design is summarily flawed in that it focuses most of its electrical power generation on the AN/SPY-6 Air and Missile Defense Radar (AMDR), making the service’s fleet of Flight IIA destroyers the choice platform for laser integration.

“[W]e are out of Schlitz with regard to power,” as then-Navy director of surface warfare Rear Adm. Ron Boxall put it back in 2019 in reference to the AMDR to the Flight III hulls. “’We used a lot of power for that and we don’t have as much extra for additional functions.”

While the Navy may struggle with long-term integration into those newer Flight III destroyers due to power generation, service officials hope the new DDG(X) surface combatant discussed at the SNA conference will manage to solve the power generation problem.

Indeed, previously-released prospective configurations for the next-generation destroyer — intended to replace both the Arleigh Burke and Ticonderoga classes starting in fiscal year 2030 — to rock dual 600-kW lasers on its stern for missile defense and a single 150-kW laser for small UAVs and watercraft on its bow.

“Shipbuilding is a long game, right?” Pyle said, per National Defense magazine. “So when we achieve the directed energy power that we’re looking for, or high power microwaves — or whatever that may be — or lasers, we want to have a platform to land it on.”