The Navy plans on slapping a laser weapon on a littoral combat ship for the first time in the next year amid increased efforts to field laser systems aboard surface warships, USNI News reports 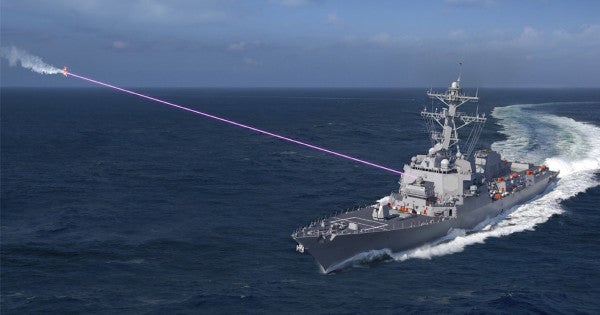 The Navy plans on slapping a laser weapon on a littoral combat ship for the first time in the next year amid increased efforts to field high-energy laser systems aboard surface warships, USNI News reports.

Vice Adm. Richard Brown, commander of Naval Surface Forces, told reporters that the USS Little Rock will receive a new laser weapon in the middle of an upcoming deployment, likely alongside its sister ship, the USS Detroit, with the 4th Fleet.

According to USNI News, that laser weapon is likely the Lockheed Martin-made 150 kilowatt High Energy Laser and Integrated Optical-dazzler with Surveillance (HELIOS) system that's been the Navy's laser of choice since 2018.

The Navy had previously announced in March 2019 that the service plans on mounting a laser weapons system aboard a Arleigh Burke-class guided-missile destroyer to “burn the boats,” as Rear Adm. Ron Boxall said at the time.

The following May, Boxall announced that the USS Preble would in 2021 become the first destroyer outfitted with the high-energy laser system as a new countermeasure against surface craft and unmanned aerial systems.

While USNI News reports that Little Rock's laser upgrade comes amid a broad LCS Lethality upgrade effort scheduled to kick off in fiscal year 2022, it also comes amid concerns of power generation among Navy surface warships.

Indeed, the Navy “will have to either remove something or look at 'very aggressive power management,'” in order to install just one 60 kilowatt HELIOS laser system aboard the latest Arleigh Burke-class destroyer, according to a December 2019 Congressional Research Service report.

“[W]e are out of Schlitz with regard to power,” Boxall said at the time of the power requirements for the warships' new AN/SPY-6 Air and Missile Defense Radar systems. “'We used a lot of power for that and we don't have as much' extra for additional functions.”

The LCS might prove an alluring alternative to the power-strapped destroyer: In 2014, a non-partisan report from the Center for Strategic and Budgetary Assessments suggested that the LCS's superior power generation could potentially let the new warship effectively operate the 300-500 kw laser systems required to take out incoming cruise missiles and other potential threats.

But with the LCS widely regarded as a floating garbage pile, it seems unlikely that Big Navy will rush full-steam ahead into outfitting every fresh hull with a laser system — not until the USS Little Rock proves that it has what it takes to, as Boxall put it, “burn the boats.”