The Navy wants lasers to shoot down drones and missiles, but its ships lack the power to fire them

'We are out of Schlitz with regard to power ... we don't have as much' extra for additional functions" 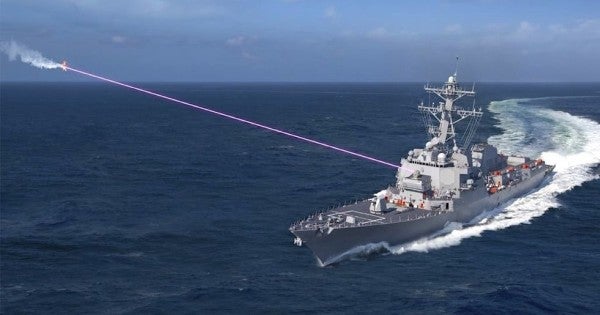 The Navy is scared to death that rival countries like China, Russia and Iran might sink its multibillion dollar surface ships with powerful cruise missiles and waves of cheap drones. But while ship-mounted lasers could be the Navy's most effective response to these threats, a new Congressional Research Service report on directed energy weapons indicates many of the Navy's newest destroyers might not have enough power to fire them.

The Navy “will have to either remove something or look at 'very aggressive power management,'” in order to install one 60 kilowatt laser system, called the high-energy laser with integrated optical dassler and surveillance (HELIOS), onto the newest flight of Arleigh Burke-class destroyer, the report said, citing Rear Adm. Ron Boxall, director of Navy Surface Warfare, who was quoted in several news articles.

“[W]e are out of Schlitz with regard to power,” Boxall said, noting that the Flight III Arleigh Burke destroyers are already strapped powering the new AN/SPY-6 Air and Missile Defense Radar. “'We used a lot of power for that and we don't have as much' extra for additional functions.”

Though Navy destroyers are currently equipped with 20mm Phalanx gatling guns and surface-to-air (SAM) missiles, the Navy fears using those systems to fight drone swarms may be unsustainable in a long conflict, the report said. According to the Navy, the RIM-162 Evolved SeaSparrow Missile, which is used as a SAM missile aboard Arleigh Burke-class destroyers, can cost anywhere from $787,000 to $972,000 a pop depending on the configuration. In addition, Navy leaders fear that each Phalanx system will simply run out of ammo when engaging an incoming swarm.

By contrast, a solid-state laser weapon can be fired for a marginal cost of less than one dollar per shot, the report said. The cost corresponds to the fuel needed to generate the electricity used for each shot; and as long as the ship has fuel, the laser can fire, so it will never run out of ammunition. Lasers also have the advantage of versatility: unlike SAMs, laser weapons reach their target at the speed of light, can be quickly redirected towards another target, keep track of a radically maneuvering missile, and power down to jam enemy sensors.

Unfortunately, this power management issue will only become more pronounced as the Navy develops even more powerful and power-hungry lasers over the next several years. The HELIOS system is only 60 kW, and the Navy wants to ramp up the power to 300 kW on future lasers so that they can burn through the nose cones of enemy cruise missiles, the report said.

At the moment, the HELIOS has the potential to power up to 150 kW, but that just won't be enough, a Navy official told Breaking Defense in October.

“Even if you take all the other elements of a laser weapon and have them be perfect” – the targeting, the cooling, the beam control — “we still don't have enough power,” said Frank Peterkin, a senior scientist at the Office of Naval Research, per the report.

Part of the reason why lasers need to be more powerful is because, unlike a SAM missile, a laser won't knock an enemy drone or missile out of the sky on impact. Instead, the laser needs to damage a specific spot on the target to disable it, Peterkin explained. If that spot is reinforced in any way, a weak laser might not cause enough damage to disable the target.

The nose cones on supersonic cruise missiles, reinforced to survive the heat of friction with the air, make those missiles largely immune to dead-on laser strikes in the 60 kW to 150kW range, the report said.

Currently, the Navy has a three-step plan for installing lasers on surface warships. The first increment involves installing the 60 kW HELIOS system on more vessels to counter drones and small attack draft. In May, the Navy announced that the USS Preble would be the first destroyer to be equipped with the system; officially, the Navy plans on installing HELIOS onto more Arleigh Burke destroyers starting in 2021.

The second increment will see the Navy attempt to ramp up the power of its ship-borne laser weapons, enabling surface vessels to take out cruise missiles that are targeting nearby friendly ships. However, because these lasers still won't be powerful enough to burn through the nose cone of a cruise missile, a surface vessel would not be able to defend itself against a head-on attack — a problem the Navy hopes to solve in increment three.

But even if the Navy can get its power situation figured out, there's still the fact that lasers are complex, sensitive systems and the sea is a harsh environment. Moisture and salt can damage equipment, the report said, and cloudy or turbulent weather can diffuse a laser beam over long distances, making it less effective.

Some of these challenges could be mitigated as the lasers become more efficient and powerful, the report said.

“Adaptive optics, which make rapid, fine adjustments to a laser beam on a continuous basis in response to observed turbulence, can counteract the effects of atmospheric turbulence,” the report said. “Even so, lasers might not work well, or at all, in rain or fog, preventing lasers from being an all-weather solution.”

Weather problems aside, Congress seems set on investing heavily in the Navy's solid-state laser capabilities. The House of Representatives' fiscal 2020 National Defense Authorization Act includes a provision requesting that the Navy submit a report by April 1 on the way forward for integrating high-energy lasers in the 150-300 kW range on large capital ships such as aircraft carriers and amphibious ships.

Meanwhile, the Senate requested the Navy to brief its Armed Services Committee on the progress of laser systems development and testing every six months through fiscal 2021.

Of course, even Dr. Evil knows that developing frickin laser beams costs money, maybe even more than $1 million dollars. That's why the Senate recommended an increase of $15 million for laser research in its defense budget, and $65 million for the Navy to buy another HELIOS in fiscal 2020.