"I’ve watched it in action and it’s really quite impressive." 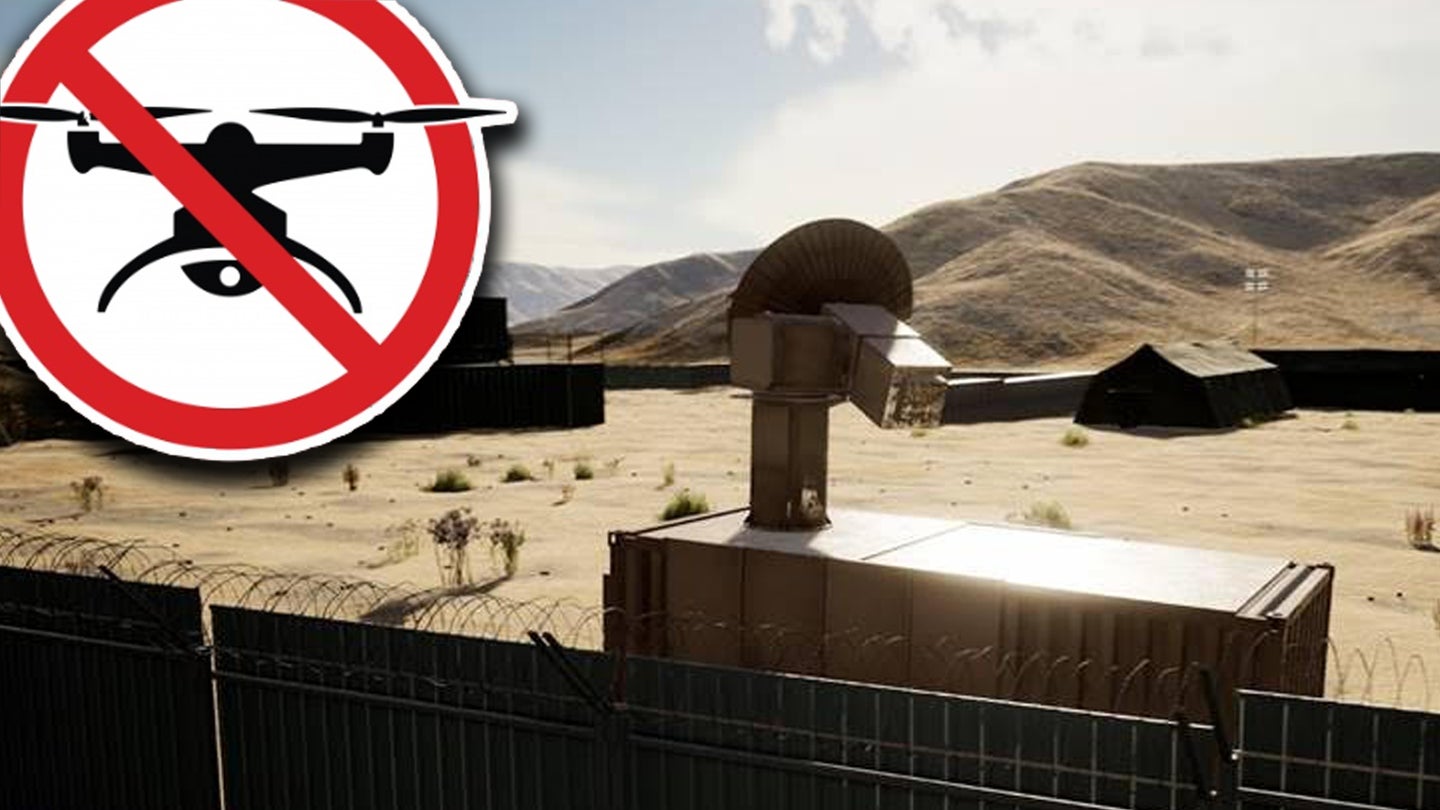 One of the biggest threats to U.S. troops abroad isn’t a stealth fighter, a nuclear missile, or a massive cyber attack. It’s a swarm of cheap drones that can overwhelm the expensive defense systems troops have on hand now.

“I’m talking about the [drone] you can go out and buy at Costco right now in the United States for a thousand dollars, four quad, rotorcraft or something like that that can be launched and flown,” Marine Gen. Kenneth McKenzie, the head of U.S. Central Command said last summer. “And with very simple modifications, it can be made into something that can drop a weapon like a hand grenade or something else.”

In sufficient numbers, those drones can spy on friendly bases, destroy infrastructure and attack personnel, explained the Air Force Research Laboratory in a recent video. How? Because machine guns don’t have the range or accuracy to destroy the nimble fliers; anti-aircraft missiles are too expensive to use on the cheap devices; and most military bases don’t have enough missiles to destroy an entire swarm.

Enter Thor, the Norse god of Thunder, who serves as the namesake to one of the Air Force’s newest weapons. While the Air Force’s Tactical High Power Operational Responder (THOR) may not look like a hero, it could save the day for American troops if their far-flung combat outposts are ever attacked by hundreds of cheap kamikaze-style enemy drones.

THOR isn’t much to look at: the weapon consists of a big satellite dish mounted on top of a 20-foot long shipping crate. But simplicity is a virtue, as the weapon can be transported easily aboard a C-130 transport plane and set up within three hours by a crew of two, according to the Air Force Research laboratory, which is leading the development of THOR.

Once THOR is set up, it can detect an incoming threat and silently shoot a beam of energy to knock out drones in a wide target area, exactly like what you might find in a drone swarm. The beam is a high-powered microwave that instantly triggers a counter-electronic effect in the targeted drone. AFRL boasted that the system took out hundreds of drones in real-world tests. That real world setting may have been somewhere in Africa, where the Air Force tested out THOR starting in December.

“I’ve watched it in action and it’s really quite impressive,” said Air Force chief scientist Richard Joseph at the time.

The Air Force has been testing THOR since at least 2019, and now the branch wants to make it even better. Last week, the Air Force Research Laboratory announced that it wants to develop Mjolnir (pronounced mee-yol-neer), a weapon that will do the same thing as THOR but at a higher level. In Norse mythology, Mjolnir is Thor’s hammer, with which he slays many a great foe.

“Because THOR was so successful, we wanted to keep the new system’s name in the THOR family,” said Amber Anderson, THOR program manager, in a press release about Mjolnir.

Mjolnir will use the same technology, but will be more advanced in terms of “capability, reliability, and manufacturing readiness,” the Air Force Research Laboratory explained in a recent press release. That last part, “manufacturing readiness,” means the branch hopes private businesses will help the Air Force produce “large quantities” of the system.

The Air Force lab hopes to deliver a prototype of Mjolnir by 2023, but the sooner the better, since top military thinkers are already ringing alarm bells over America’s adversaries developing drone swarm technology.

“Small, fully autonomous GPS-programmable drones can be purchased online by anyone for a few hundred dollars,” wrote the Center for New American Security in a recent press release. “Outfitted with small explosives, chemical or biological weapons, they could be converted into short-range precision weapons.”

Just two years ago, Houthi fighters in Yemen used drones to fly past Saudi Arabian missile defense systems and hit the oil processing facilities at Khurais and Abqaiq, the largest such facility in the world. The attack sent oil prices soaring and was a wake-up call for national security experts.

“It was the first instance of a mass-drone attack and the highest number of drones that I believe we’ve seen non-state actors use simultaneously in a combat operation,” Paul Scharre, vice president of the Center for New American Security and an expert on autonomous weapons, told the Guardian.

In 2017, ISIS fighters also used small, commercially available drones to drop mortar rounds onto Iraqi security forces during the battle for Mosul. Last fall, drones also drew headlines for their role in the war between Armenia and Azerbaijan over the Nagorno-Karabakh region.

“[Unmanned aerial vehicles] were operationally integrated with fires from manned aircraft and land-based artillery but also frequently used their own ordnance to destroy various high-value military assets,” including Armenian T-72 tanks and S-300 air defenses, according to an analysis of the Nagorno-Karabakh conflict by the Center for Strategic & International Studies. The U.S., with its multi-billion dollar jets and ships, worries that its expensive platforms may suffer a similar fate.

“Although an individual low-cost drone may be powerless against a high-tech system like the F-35 stealth fighter, a swarm of such drones could potentially overwhelm high-tech systems, generating significant cost-savings and potentially rendering some current platforms obsolete,” wrote the Congressional Research Service in a 2020 report.

To counter such a threat, the military needs a weapon that can hit the target and won’t run out of ammo as the swarm approaches. Nets or shotguns might be promising options, but those methods are effective only within a range of a few dozen meters, researchers said in a recent report titled Directed Energy Futures 2060. THOR’s range remains unclear, but researchers said in the report that counter-drone directed energy weapons have a range of about one kilometer.

While THOR is a directed-energy weapon, it’s not the same as a laser, Breaking Defense said. A laser can knock out one drone at a time, but THOR can swat down entire swarms in a single shot.

“If anti-drone lasers are like sniper rifles, microwave weapons are like shotguns full of birdshot,” the site wrote last year.

But there may be even crazier anti-drone energy weapons coming down the pike. The goal of a directed energy weapon system is to produce a counter-missile and counter-drone system that’s so effective, fast and affordable that it basically acts like a force field against incoming threats, according to the Directed Energy Futures 2060 report. It’s not quite like the deflector shields in Star Wars, but if it stops threats from coming through, then what’s the difference?

“We’re painting with broad strokes, but we’re diving into what missions of the future will look like,” Jeremy Murray-Krezan, the directed energy deputy chief scientist for the Air Force Research Laboratory, according to Breaking Defense. “The technology is not quite Star Wars, but we’re getting close.”