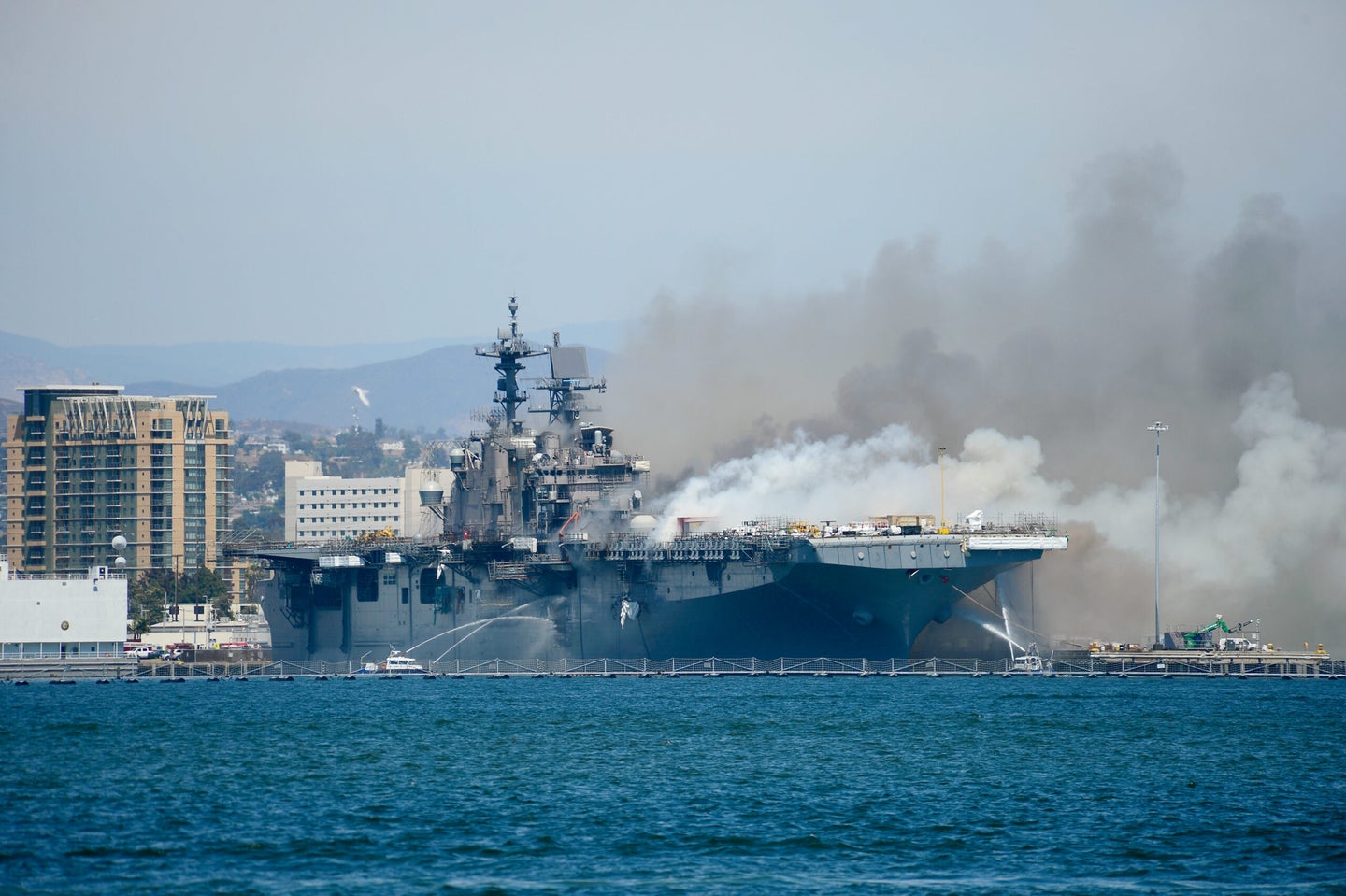 The Navy has charged a sailor with starting a fire in July 2020 that destroyed the USS Bonhomme Richard, an amphibious assault ship that became engulfed by an inferno for days as the ship was docked in San Diego, California.

On Thursday, the service announced it was charging the sailor “in response to evidence found during the criminal investigation” into the fire, which caused so much damage to the ship that the Navy decided to scrap it altogether. The service concluded in November 2020 that it would take at least five years and more than $3 billion to get the ship back up and running. It would have cost more than $1 billion to modify the ship to a different type of vessel, such as a hospital ship.

“Evidence collected during the investigation is sufficient to direct a preliminary hearing in accordance with due process under the military justice system,” said Cmdr. Sean Robertson, a Navy spokesman. “The sailor was a member of Bonhomme Richard’s crew at the time and is accused of starting the fire.”

The sailor, a seamen apprentice, has been charged under the Uniform Code of Military Justice with allegedly violating Article 110, improper hazarding of a vessel; and Article 126, aggravated arson.

“My client adamantly denies the allegations,” said Gary S. Barthel, a retired Marine lawyer now in private practice who is representing the sailor. Barthel told Task & Purpose on Friday that he had not yet seen any evidence against his client, who was briefly detained at the Marine Corps Air Station Miramar brig last year and later released. “It has been a very strenuous situation for him, as you can imagine. In time his name will come out. I don’t want to create any more stress for him.”

Robertson declined to give the name of the sailor or provide a copy of the charge sheet before the sailor went to a preliminary hearing, called an Article 32, which will determine if there is enough evidence to take the sailor to court-martial. Officials could not say when that hearing would take place.

Vice Adm. Steve Koehler, the commander of the Navy’s 3rd Fleet, is overseeing the case and “has directed a preliminary hearing at which an impartial hearing officer will make determinations and recommendations required by the UCMJ prior to any further trial proceedings – including whether or not there is probable cause to believe an offense has been committed and to offer a recommendation as to the disposition of the case,” Robertson said.

The fire began in the lower vehicle storage area of the 844-foot ship at around 8:30 a.m. on July 12, 2020, as it sat pierside at Naval Base San Diego. Hundreds of Navy and civilian firefighters worked inside the vessel as helicopters flew through Sunday evening and into Monday morning to dump buckets of water on the ship. The blaze was finally extinguished only after a grueling four-day battle to contain it ended on July 16. Dozens of sailors and civilians were injured while fighting the firestorm, which reached temperatures of 1,000 degrees.

The flight deck of the Bonhomme Richard was receiving upgrades at the time so it could handle a contingent of F-35B aircraft. Chief of Naval Operations Adm. Michael Gilday later said 11 of the ship’s 14 decks had been damaged, according to then-Defense News reporter David Larter.

The loss of the ship, designed to carry thousands of Marines which can be launched toward distant shores on landing craft and helicopters, was a major setback for the Navy and the Marine Corps at a time when the services say they’re needed most. Top officials are asking for around 30 of the ships to be built in the coming years, which are seen as key components in the Corps’ “expeditionary advance base operations” concept for the Pacific. The U.S. currently has nine.

The last time the Navy determined a vessel was too costly to repair was in 2012 after a fire on the Los Angeles-class submarine USS Miami caused up to $700 million worth of damage and injured seven people, as Jeff Schogol reported. A 25-year-old shipyard worker was later sentenced to 17 years in prison after starting the fire in part so he could leave work early.