Escape From Berthing 2: The Navy’s Dramatic Timeline Of The USS Fitzgerald’s Fatal Collision

On Aug. 17, the Navy released the preliminary results of its investigation into the June 17 collision between the Arleigh... 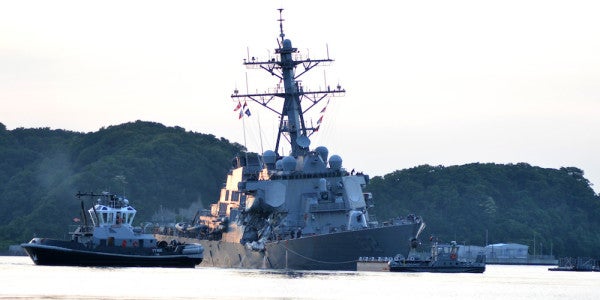 On Aug. 17, the Navy released the preliminary results of its investigation into the June 17 collision between the Arleigh Burke-class destroyer USS Fitzgerald and Philippine-flagged container ship ACX Crystal that left seven sailors dead. The report provides minute-by-minute details of the horror that unfolded aboard the Fitzgerald after the nighttime collision, but it also highlights brave actions by the sailors of Berthing 2, which immediately flooded after the Crystal’s “bulbous bow” punched a 13-by-17 foot hole below the Fitzgerald’s waterline, to save their fellow sailors.

Read on for excerpts on how they kept their ship afloat:

The sailors of Berthing 2 faced imminent death in the minutes after the collision:

The impact of the collision knocked the destroyer on its ass:

Berthing 2 was thrown into chaos:

The bravery of two sailors in particular prevented more deaths:

Only one sailor escaped Berthing 2 through the starboard egress point — and he lost consciousness underwater at some point:

“The sailors assigned to Berthing 2 should be commended for their response to the dangerous and deadly threat they faced,” the report states, noting that the two men who remained in the flooding compartment to check for their fellow sailors “likely saved the lives of at least two of their shipmates.”

At the same time that the Navy released its report on its sailors’ post-impact heroics, the Japan-based 7th Fleet announced it had relieved the Fitzgerald’s commanding officer for his “absolute accountability” for the ship’s operation; its executive officer and command master chief for contributing “to the lack of watch stander preparedness and readiness that was evident in the events leading up to the collision”; and an undisclosed number of junior officers who were on watch at the helm or in the CIC for their “poor seamanship and flawed teamwork” — a finding that confirms earlier reports of the destroyer's poor response to the incident.

But even 7th Fleet’s announcement praised the crew for its actions the remainder of that night on the sea of Japan. “It was also evident from this review that the entire Fitzgerald crew demonstrated real toughness that night,” the news release said. “Following the collision, these Sailors responded with urgency, determination, and creativity to save their ship.” Looking at what the sailors of Berthing 2 did, we couldn’t have said it better.

You can read the Navy's full report below: