Rear Adm. Brian Fort will lead a Navy investigation into the collision that killed seven USS Fitzgerald sailors off the... 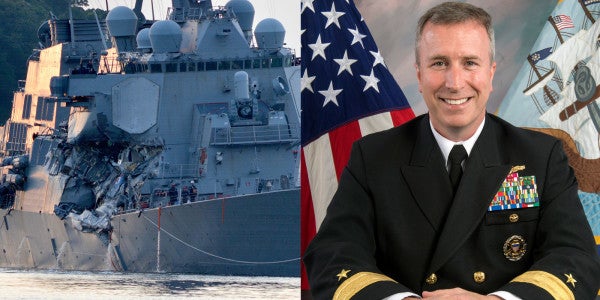 The accident between the destroyer and the Philippine-flagged ACX Crystal cargo ship happened about 2:30 a.m. June 17, about 64 miles southwest of Yokosuka Naval Base near the Izu Peninsula, a Navy statement said.

The sailors were found in flooded berthing compartments after search-and-rescue crew members gained access to spaces that were damaged during the collision, the 7th Fleet said in an earlier statement.

The ACX Crystal was heading east, not far from its Tokyo Bay destination, when it turned around and traveled in a circle, according to public data from the ship’s automatic tracking system posted on Marinetraffic.com. It had completed its circle at roughly the same time of the reported collision, according to the data.

Coast guard official Tetsuya Tanaka told The Associated Press the agency is trying to resolve what happened during that 50 minutes.

A spokeswoman for NYK, the company chartering the ACX Crystal, also said the collision happened at 1:30 a.m.

The time element will be part of the Navy’s investigation, a 7th Fleet spokesman told Stars and Stripes.

Fort, the former commander of a squadron of six destroyers, is a graduate of the University of Arkansas and the Naval War College.