Twelve sailors were injured when an MH-60R Seahawk helicopter crashed aboard the aircraft carrier USS Ronald Reagan on Friday, officials... 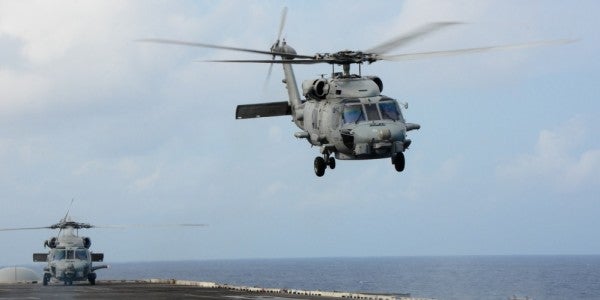 All of the sailors are in stable condition, said Lt. Joe Keiley, a spokesman for 7th Fleet.

“Injuries ranged from minor abrasions and lacerations to bone fractures,” Keiley said in an email to Task & Purpose. “The sailors that had the more extensive injuries were medically evacuated to a hospital in the Philippines.”

Keiley said he was unable to elaborate further on the types of injuries that sailors sustained to due to privacy restrictions in the Health Insurance Portability and Accountability Act. The Reagan’s medical department continues to monitor the injured sailors who are still aboard the ship.

The Reagan is currently in the Philippine Sea, a Navy news release says. Shortly after 9 a.m. on Friday, the helicopter crashed on the carrier’s flight deck while making an emergency landing. The crash happened shortly after takeoff.

Investigators are looking into the cause of Friday’s crash, the news release says. The injured sailors’ families have been notified.

SEE ALSO: Navy Helicopters Run Right Into Each Other On A Japanese Runway