17 sailors and four civilians are being treated for non-life threatening injuries, the Navy said. 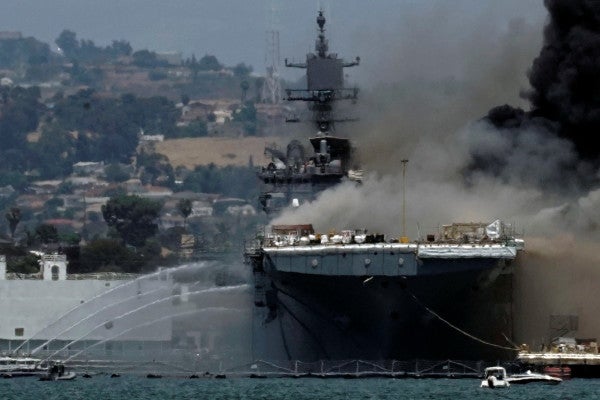 The origin of a fire that injured 17 sailors and four civilians aboard the amphibious assault ship USS Bonhomme Richard on Sunday is still unknown, the Navy said in a press release Sunday evening.

The fire broke out around 8:30 a.m. on Sunday as the Bonhomme Richard was docked pier side at Naval Base San Diego and undergoing maintenance, the Navy said. 160 sailors out of the amphibious assault’s total crew of 1,000 were aboard the ship at the time.

Though it is still unclear where the fire started, the ship was soon engulfed in massive pillars of smoke that were caught on helicopter footage and could be seen throughout the San Diego.

USS Bonhomme Richard (LHD-6) Fire – Naval Base San Diego – 1 firefighter has been injured. A new explosion just now occurred. Everyone is being moved off the pier. Live stream from helicopter: https://t.co/hFaIk4jLhH

Local, base and shipboard firefighting teams responded to the fire as sailors were evacuated from the ship. By 12:15 all the sailors were ashore and accounted for, but the fire raged on.

At around that point, the Navy said 11 sailors were transferred to a local hospital with non-life threatening injuries. Meanwhile, other Navy ships docked nearby were pulled away.

The USS Fitzgerald had only recently returned to San Diego after leaving a Huntington Ingalls shipyard in Mississippi, where the ship had spent nearly three years under repair after a collision off the coast of Japan which seven sailors and injured several others.

It appears the #destroyer just opposite the pier from the burning #BONHOMME RICHARD LHD6 is the just-repaired USS #FITZGERALD DDG62, who just arrived at San Diego 2 July after 2+ years being repaired from her 2017 collision. Smoke damage looks intense pic.twitter.com/Sjz0e5FtTi

By 1:30 p.m. local time, the number of injured had gone up to 18, all with minor injuries. An hour after that, the number changed again to 17 sailors and four civilians. A Navy spokesperson told the San Diego Union-Tribune that it was unknown whether those sailors were involved in firefighting efforts.

Meanwhile, all inport ships were directed to help out with the effort, the Navy said, some by providing firefighting teams.

Naval Surface Forces said federal firefighters led the effort, while Navy tugs helped from the bay. As plumes of smoke rose over the city, residents were urged to stay inside due to potential health effects.

“We are grateful for the quick and immediate response of local, base, and shipboard firefighters aboard USS Bonhomme Richard,” he said in a statement. “Our thoughts and prayers are with our BHR Sailors, their families, and our emergency responders who continue to fight the fire. Godspeed.”

The ship's last deployment was in 2018, The San Diego Union-Tribune reported.

The original Bonhomme Richard was a frigate under the command of John Paul Jones, one of the founders of the U.S. Navy. In 1779, during the Revolutionary War, Jones engaged a British ship, the HMS Serapis, off the coast of England. According to the Navy:

Richard was blasted in the initial broadside the two ships exchanged, losing much of her firepower and many of her gunners. Captain Richard Pearson, commanding Serapis, called out to Jones, asking if he surrendered. Jones' reply: “I have not yet begun to fight!”

Eventually, the Richard sunk, and Jones was forced to transfer to the Serapis, the Navy wrote. Jones is buried in the crypt of the U.S. Naval Academy in Annapolis, Md.