Has justice actually been served for the USS Fitzgerald disaster?

Shortly after seven sailors died aboard USS Fitzgerald when she collided with a merchant ship off Yokosuka in 2017, I wrote that the Fitzgerald's watch team could have been mine 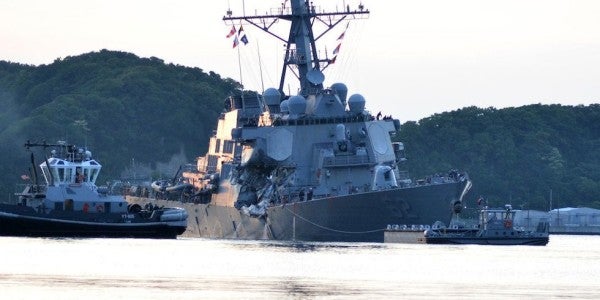 Shortly after seven sailors died aboard USS Fitzgerald when she collided with a merchant ship off Japan in 2017, I wrote that the Fitzgerald's watch team could have been mine. My ship had once had a close call with me on watch, and I had attempted to explain how such a thing could happen. “Operating ships at sea is hard, and dangerous. Stand enough watches, and you'll have close calls,” I wrote at the time. “When the Fitzgerald's investigation comes out, I, for one, will likely be forgiving.”

The investigations, both public and private, are out, and the Government Accountability Office (GAO) recently released a report assessing the changes to training implemented since the collisions.

On the bridge of both ships — my ship in 1995 and Fitzgerald in 2017 — watch teams struggled with a difficult navigation problem: if and how to maneuver around an oncoming ship in crowded waters, where safe options are limited.

On Fitzgerald in 2017, the Officer of the Deck (OOD), the person on the bridge primarily responsible for safe navigation, was a young officer like I was in 1995. In both situations, a large merchant ship was approaching. Other merchant ships, plus a fleet of fishing boats, reduced the safe maneuvering options. The Fitzgerald OOD, like me in 1995, thought turning or slowing might make things safer with the approaching ship, but might make things worse with the others. Both she and I were fatigued, operating in the middle of the night, not thinking of the better options we would think of later. Neither of us succeeded in calling the captain to the bridge during the moment of maximum danger.

But this is where our stories diverge.

On my ship, though we failed, we tried to contact the oncoming ship via radio. The Fitzgerald OOD didn't try. We achieved an early and accurate radar track on the merchant ship. Not so on Fitzgerald. As a result of the lack of accurate radar information, her estimate of the oncoming ship's track wrongly had it passing close, but missing. While we were attempting to keep our captain updated, she didn't call hers for advice.

As things got closer, my team made multiple maneuvers to avoid disaster, watching the other ship closely. Ultimately, our last maneuver was successful in avoiding collision. Fitzgerald's team continued to believe the ship would pass close — but safely — by until mere minutes before the collision. The actions the Fitzgerald OOD took in extremis were the wrong ones and ineffective in avoiding catastrophe. It was probably too late at that point anyway.

Aboard Fitzgerald, the failure of the OOD to call the captain for close encounters was not isolated to this one watch by this one officer. The investigating admiral found “numerous, almost routine, violations of the CO's standing orders” and said, “Procedural compliance by bridge watch standers is not the norm onboard.” The investigation revealed that Fitzgerald's sailors “were not familiar with basic radar fundamentals, impeding effective use.” Also, that Fitzgerald's leaders “accepted difficulties in operating radar equipment due to material faults as routine rather than pursuing solutions to fix them.”

Going even further back, before reporting aboard my ship, I was required to pass the intensive, six-month-long Surface Warfare Officer School Division Officers Course, which taught, among other things, safe navigation and shipping avoidance. Fitzgerald's OOD attended the abbreviated version, the Basic Division Officer Course, which was only two months long. Training for ship drivers had been drastically cut since my day.

The investigations further discovered that Fitzgerald's watch team members were unfamiliar with the International Rules of the Road and Traffic Separation Schemes which both govern safe navigation. The watch team on my ship was very proficient in these.

My first article was wrong: Fitzgerald's watch team couldn't have been mine, but I don't think it was because we were inherently better sailors. All of these indicate failures of leadership and culture aboard Fitzgerald — the captain's and senior officers' responsibilities.

The Navy knows this. The admiral's report on the incident stated, “It is inexplicable that neither (the captain) nor (the executive officer) were on the bridge for his first outbound Yokosuka transit.” Additionally, the investigations found pressure throughout the fleet in 2017, pushed from the top down, to say yes to any mission, regardless of the impact on training and maintenance. This resulted in ill-equipped ships going to sea with insufficiently trained crews.

The OOD aboard Fitzgerald, after much less rigorous initial training than me, was put aboard a ship with malfunctioning equipment, lax procedures, untrained sailors, and a culture that tolerated all of it. Her chain of command, all the way up to the Admiral, was far more interested in getting the ship to sea than in the qualifications and training of the crew, or the condition of the equipment.

But how have the leadership in Fitzgerald, and admirals in the Navy, been held to account for these failures? The captain of the Fitzgerald was facing a board of inquiry to determine if he should be allowed to stay in the Navy, but his court-martial was called off. It was just announced that he would be allowed to retire next month instead. Two admirals, a commodore, and a few others opted for early retirement.

On watch that night, the OOD made undeniable mistakes with terrible consequences. She must feel the burden of her fallen shipmates. But to her credit, she pleaded guilty to dereliction of duty at her court-martial, retaining her honor, and taking responsibility for the tragedy in a way that neither her captain, nor any senior Navy leader, has. The fault was hardly hers alone.

What if I had gotten my qualifications, not aboard my ship in 1995, but aboard USS Fitzgerald in 2017? How would I have fared off Yokosuka on the night of June 17th, 2017? Not well, I suspect. My original article guessed I would be forgiving, and I am — for the OOD.

But for big Navy and its leadership? Not so much. Though the Navy has implemented important new requirements for the training of ship drivers, the GAO's report makes clear that more work is required.

As for accountability for the root causes of the collisions? The only court-martial held was the OOD's, and she was one of the lowest-ranking officers involved. Others were forced to retire early, but let's not pretend that's the same thing. Our duty to the fallen sailors requires more.

James Seddonretired from the Navy as a Surface Warfare Officer after 21years in active and reserve billets with multiple deployments afloat and ashore throughout Asia and the Middle East. He currently works in IT at a university and is writing a book about his tour in Afghanistan.