"Assigning this level of blame to the commanding officer does not let the chain of command and 'Big Navy' off the hook." 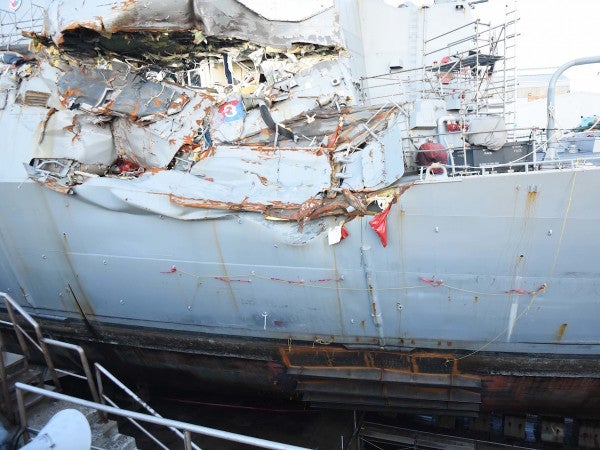 The Navy is once again publicly blaming the former captain of the Navy destroyer USS Fitzgerald for the June 2017 collision with a merchant ship that killed seven sailors, according to attorneys for Cmdr. Bryce Benson.

Benson’s attorneys have filed a complaint claiming there have been three recent examples of unlawful command influence.

Chief of Naval Operations John Richardson is quoted in a Feb. 6 ProPublica story about the Fitzgerald collision as saying: “Our commanders make decisions and our sailors execute and there is an outcome — a result of that decision. The commander ‘owns’ that outcome.”

On Feb. 8, the Navy’s official Twitter account tweeted a link to a War on the Rocks commentary about the Fitzgerald collision including the following quote: “Assigning this level of blame to the commanding officer does not let the chain of command and ‘Big Navy’ off the hook. Rather, it places responsibility where it properly lies. The chain of command and Big Navy cannot be onboard all the time and cannot be expected to create individual solutions to individual ship problems.”

Also on Feb. 8, Capt. Greg Hicks, acting chief of information posted a quote from the War on the Rocks piece that argued the Fitzgerald’s captain was responsible for the collision on his personal Facebook page along with this preface: “Lengthy quote, but worth it. As an officer, even if not in command, I am responsible at all times to those I am blessed to lead.”

“Yet despite that clear ruling, the Navy persists in and even expands upon this strategic messaging campaign,” Benson’s attorneys said in a statement to Task & Purpose.

Navy officials declined to comment on the complaint when contacted by Task & Purpose. The two Feb. 8 tweets were taken down after Benson’s attorneys complained. Hicks said all comments on his personal Facebook page are strictly his own opinion.

The comments cited by Benson’s attorneys are problematic, even if they don’t meet the legal definition of unlawful command influence, said military law expert Rachel VanLandingham. For example, the Navy’s tweets with the War on the Rocks quote could be seen as an official endorsement of the author’s argument that Benson is responsible for the collision, she said.

“It’s within the spirit if not the technical prohibition of unlawful command influence because it seems to strongly imply that Big Navy, the command chain, has decided that the CO and his subordinates are responsible for all of this: We think they screwed up in the following way,” said VanLandingham, a retired Air Force lieutenant colonel who now teaches at Southwestern Law School in Los Angeles.

The Navy did the right thing by quickly deleting the tweets, which acknowledged that they should not have been posted in the first place, she said.

Hicks’ comments are less troublesome because he is allowed to have personal opinions, VanLandingham said. However, it is an open question whether senior Navy officials’ Facebook pages can be considered “personal,” she added.

Should the case go to court-martial, the military jurors can be asked if they read any of the comments that Bensons’ attorneys have complained about, VanLandingham said. The judge has other remedies, such as by giving the defense more leeway in filing challenges.

However, it is unclear whether Benson will ever go to trial for the Fitzgerald collision. He had been charged with dereliction of duty and improper hazarding of a vessel, but the case was thrown into legal limbo in January when a military judge disqualified the admiral who had been overseeing the trial and ruled the charges against Benson had been “defectively referred” to court-martial, said Lt. Cmdr. Justin Henderson, one of Benson’s attorneys.

Although the Navy initially charged Benson with negligent homicide as well, that charge was dropped in June 2018, Henderson said.