2 years after the Fitzgerald and McCain collisions, the Navy has no idea if its new ship-driving training is working

According to senior Navy officials, it could take nearly 16 years or more to know if the planned changes will have an impact 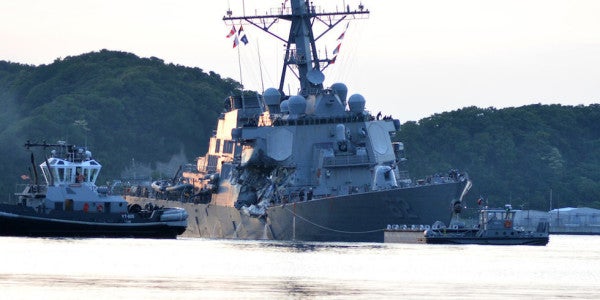 Two years after a pair of
deadly collisions involving Navy ships killed 17 sailors and caused hundreds of millions of dollars of damage, the Navy still can't figure out whether its plan to improve ship-driving training has been effective.

In fact, according to senior Navy officials quoted in a recent Government Accountability Office report on Navy ship-driving, it could take nearly 16 years or more to know if the planned changes will actually have an impact.

In the aftermath of the 2017 collisions involving the USS Fitzgerald and USS John S. McCain, a Navy investigation revealed that the two incidents resulted from “a lack of adherence to sound navigational practices” and a “sub-standard level of knowledge regarding the operation of the ship control console,” respectively.

To address these problems, the Navy adopted a series of major changes designed to enhance ship-driving training through a three-fold increase in the number of training hours a surface warfare officer (SWO) must accomplish early in his or her career. The Navy hopes this increase, from 158 hours to 535 hours, will be completed by 2021.

The Navy also plans on building two new ship driving training facilities in San Diego, California and Norfolk, Virginia, by 2021 and 2023, respectively. Overall, the service plans on investing more than $467 million in new ship-driving training courses and simulator facilities, according to the GAO.

But the GAO identified one major obstacle to effectively enhancing the Navy's ship-driving training: the service has no system in place to assess whether these changes are actually working while it's implementing them — and it's this problem that the GAO sought to address in its four recommendations set out in its report.

The GAO's first recommendation is for the Navy to develop a fleet-wide feedback system on the quality of increased ship-driving training for the Navy's 8,400 SWOs. The fact that the Navy currently lacks such a system is a problem, GAO said, because it prevents Navy officials from finding out key issues in training.

Indeed, 19 out of the 24 groups of SWOs with which GAO spoke said they “have challenges in applying the ship-driving training they receive,” the report said.

SWOs often experience a wide gap between their training curriculum and the actual duties they perform, GAO found, forced to retain a large volume of course material during the long period of time between training and application. Other SWOs reported that the information covered in training was too broad, while others said they didn't get enough time in ship-driving simulators.

“Without a method to regularly collect and analyze information from SWOs across the fleet, such as in a survey, Navy decision makers lack valuable information that could help them to assess the effects of training on SWO performance,” GAO said.

The GAO's second recommendation seems pretty straightforward: conduct regular Officer of the Deck competency assessments to gauge fleet-wide ship-driving proficiency trends. But apparently the Navy's struggled with this one too.

The Navy's failure to implement assessments is a head-scratcher, GAO said, because shortly after the collisions, Navy inspectors assessed 164 SWOs and said they were concerned about the ship-driving competency levels of more than 80% of them. Some of those SWOs “should not have been qualified as Officer of the Deck,” GAO quoted Navy officials as saying, “because they violated fundamental ship-driving rules, among other issues.”

But rather than establish a permanent program of routine assessments, the Navy said it would not conduct any additional assessments beyond 2021. That doesn't make sense, GAO said, because some of the first SWOs to go through the Navy's extensive ship-driving changes won't graduate until mid-fiscal year 2024.

“Without routinely conducting Officer of the Deck competency assessments across the fleet using samples of sufficient size and selection methods…the Navy may not know whether additional changes are needed,” GAO wrote.

As any 16-year-old sitting behind the wheel of their beat-up first car knows, people have to take a standardized test to get a driver's license. But when it comes to driving a $1.8 billion
Arleigh Burke-class guided missile destroyer? Not so much: the GAO points out that the Navy does not have any Office of the Deck assessment criteria for ship commanding officers to use when qualifying a SWO to drive a ship.

GAO explains that the lack of criteria stems from a Navy-wide deference to a ship CO's judgment in interpreting an officer's preparedness to drive their ship. But that system has resulted in thousands of SWOs whose ship-driving competency varies wildly from ship to ship.

“In one group discussion, Division Officers reported being qualified as Officers of the Deck without ever having stood watch at sea, with the Commanding Officer granting qualifications based on their classroom and simulator experience alone,” GAO said.

To correct this problem, GAO recommends the Navy implement standardized criteria for qualifying ship drivers (As someone who has driven in both Massachusetts and Northern Virginia, this reporter can attest that even a licensed driver isn't necessarily qualified for the road, although I still can't imagine what the roads would look like without them).

Student drivers don't necessarily keep a logbook of their first road trips, but student SWOs are supposed to use logbooks to keep track of their first ship-driving experiences. However, GAO found that SWOs aren't always expected to fill out their logbooks, and the Navy isn't looking through them to check.

That's a problem, GAO argued, because logbooks could be a good tool for students and a great source of training feedback on for the Navy. However, the Navy so far has not appeared interested in using them.

Despite official guidance, GAO said, “the Navy does not yet have a plan that includes specific steps to analyze and use logbook information to link SWO experience with ship-driving proficiency.”

The Navy seems to be listening: According to the GAO report, the service concurred with all of the office's recommendations. Who knows, maybe that means Navy will someday, finally, be able to
turn this ship around.