"They see the real-time situation and everyone's able to react appropriately.” 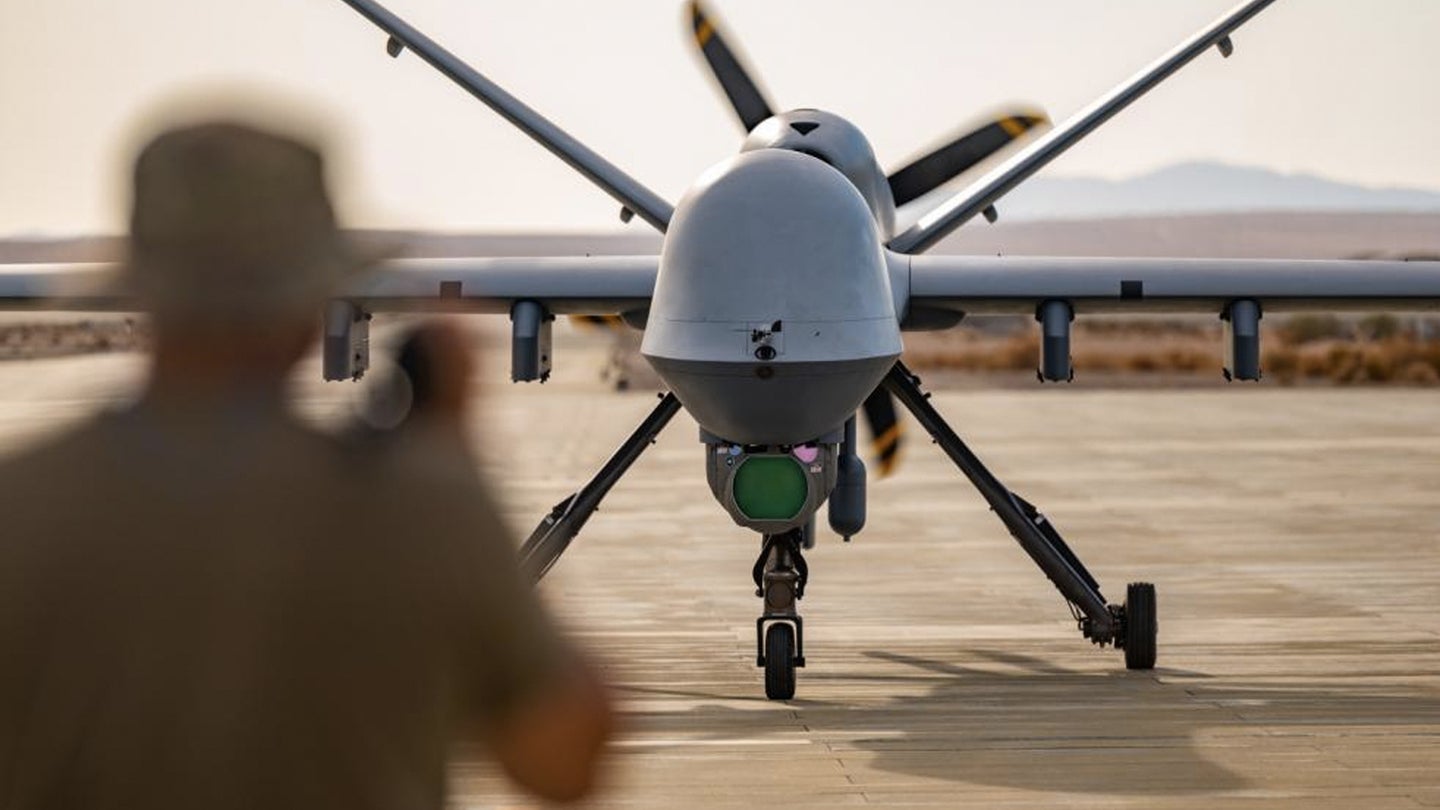 Sometimes a training mission can become very real very quickly. That’s what happened when an Air Force MQ-9 Reaper drone crew found themselves responding to a fire aboard a warship earlier this summer while participating in the international training exercise Rim of the Pacific (RIMPAC) 2022.

The drone pilot, Capt. Jonathan “50” Overy, and the sensor operator, Staff Sgt. Ryan “Spam” Schultz, were flying a scheduled training mission near Hawaii from their control station at Holloman Air Force Base, New Mexico on July 17 when they received a distress call from a ship about 50 to 60 miles away from the drone. The crew approached the ship to take a closer look.

“By about 40-50 miles out, we could kind of see where the ship was,” Overy said in a recent Air Force press release. “We were using our infrared camera, which makes any heat signatures stick out, especially on the water and with the ship. You could really see that the hull below the deck was a lot hotter and a lot brighter than everything else.”

The ship was the Peruvian navy corvette Guise, according to the Army. The fire had broken out in the ship’s engine room at around 8 that morning and had severely burned two crew members. The Combined Forces Air Component Commander gave Overy and Schultz permission to switch from training to responding, and soon afterward they arrived on the scene.

Though the two airmen were more than 3,000 miles away in New Mexico, they were able to provide real-time footage of the ship to decision-makers coordinating the rescue effort. For example, at first, it was unclear if the ship was stable enough to bear the weight of a helicopter landing, which was vital information for figuring out how to get the two burned sailors off the vessel.

“We were able to say, ‘Okay, this is what we are seeing on the camera,’ and then we pushed our feed out to the entire air operations floor to include exercise control over at the Pacific Warfighting Center,” said Air National Guard Capt. Phillip ‘Flip’ West, the RIMPAC MQ-9 Maritime Force Integration lead. “Now that everyone’s on the same page, they see the real-time situation and everyone’s able to react appropriately.”

The footage from Overy and Schultz showed that the ship could not bear a helicopter landing, so instead the two patients were hoisted off the ship and flown to a hospital in Honolulu. According to U.S. Naval Institute News, the sailors were picked up by a helicopter from the French frigate Prairial, then taken to the Coast Guard cutter Midgett, then to the aircraft carrier Abraham Lincoln and then to shore, where medical providers at Tripler Army Medical Center were ready to treat the patients. The two sailors had burns covering up to 75 percent of their bodies, according to the Army. They spent a few days at Straub Medical Center, a nearby civilian hospital, before being flown by the Air Force to the Brooke Army Medical Center in San Antonio, Texas for long-term treatment.

“The close coordination in this case ensured we were able to provide necessary medical care to a partner nation,” said Col. Bill Soliz, Tripler’s commander.

The MQ-9 Reaper has a reputation for providing eyes and missiles over Iraq and Afghanistan during the Global War on Terror, but the particular Reaper that put eyes on the Guise has a history of training for search and rescue missions too. Overy and Schultz are assigned to the 492nd Attack Squadron at March Air Reserve Base, California, where they train extensively for flying over the massive wildfires that often scorch the western United States. In fact, in 2020, the Reaper helped put eyes on wildfires for the California Department of Forestry and Fire Protection, the press release said.

“We’re able to kind of loiter in one area,” Overy said. “The aircraft is slower than most, so that means that we can stay places longer. We have the gas set to hang out for hours and hours overhead. With the camera that we have on the aircraft, we can get really high fidelity images and provide a lot of situational awareness.”

The Reaper’s long loiter time and high-tech cameras make it a great option for commanders who need eyes on a battlefield, or first responders who need eyes on a disaster area. It could get even better with a new technology that would allow more people to see through the Reaper’s camera lens. The new technology, TACSIT, allows a Reaper or other unmanned aerial vehicle to share live full motion video with other service members who have military internet access and a need-to-know.

“In the past, such live steam full video feeds were more difficult to access, but now it can be accessed by anyone with NIPRNet and need to know, so that’s what’s unprecedented,” said Jared Owensby, an Air Force veteran and federal account manager for the contractor Project Hosts, which built the cloud computing environment in which TACSIT is hosted. NIPRNet refers to the Non-secure Internet Protocol Router Network used by the military to exchange unclassified information.

While Owensby could not confirm if TACSIT was used in the rescue operation, it was used by MQ-9 aircrews throughout RIMPAC. The Air Force, Navy, Army, Marine Corps and National Guard Bureau all benefited from the TACSIT demonstrations during RIMPAC, with great success.

“The MQ-9 aircrew sitting in New Mexico and intelligence personnel in Hawaii were privy to the same video feeds, in real-time, giving everyone involved the same information and putting them on the same page,” Owensby said. “That type of actionable intelligence can provide decision-makers with what they need to instantly give orders that can save lives.”

For example, a Reaper using TACSIT could provide surveillance of an airstrike target, then feed video of the aftermath back to intelligence operators so they can conduct a battle damage assessment. That kind of intelligence support is important for sweeping initiatives like Joint All Domain Command and Control, a system that the military hopes will someday allow service members to detect a target, pinpoint its location, and get the right weapon pointed at it faster than adversaries can react. TACSIT could also help with rescue operations like the Guise rescue, or domestic missions such as supporting flood and other natural disaster victims who need coordinated support from the National Guard and Air National Guard, Owensby added.

“The support from the MQ-9 enterprise and the [System Program Office] has been unprecedented in making this a reality,” he said. “We are looking forward to a long program life and growth within the other sister services.”

The fire on the Peruvian warship was extinguished 30 to 40 minutes after the two burn victims were evacuated, the Air Force press release said. The MQ-9 crew guided their plane away shortly afterward, having gained unexpected real-world experience.

“It was nice to be part of a real effort,” Overy said. “We train a lot. We’re always instructing students how to do this stuff, but I think for myself and my sensor operator, this is the first time we ever had any real-world experience with that. It’s pretty rewarding to be a part of.”