DARPA wants to put more lasers in space, but not for the reason you probably think 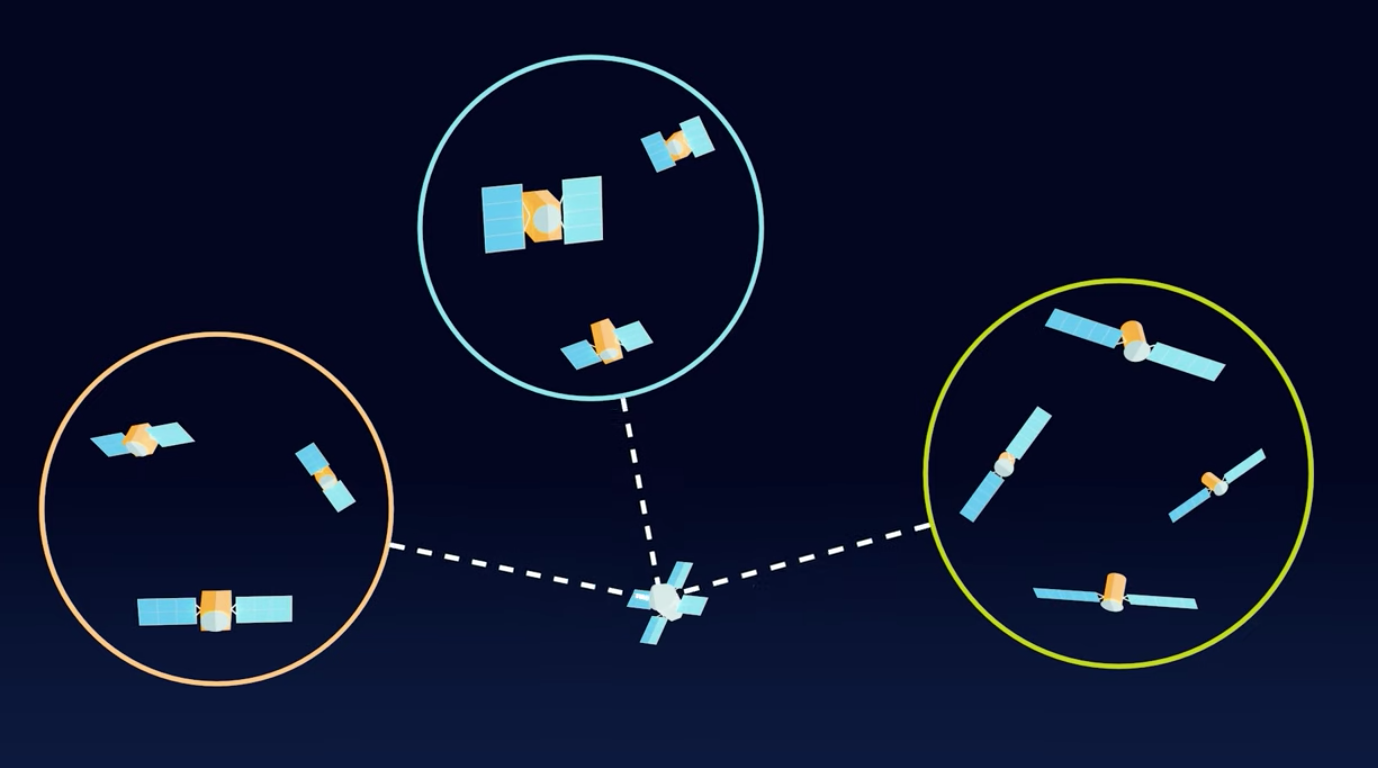 DARPA is developing a system called Space-BACN that will help satellites communicate with each other via fast, secure laser links. (Screenshot via YouTube/DARPA).
SHARE

Imagine you are on a search and rescue mission to find a downed pilot behind enemy lines. You have satellite imagery of the search area that you want to share with allies who are helping the rescue effort. But in the isolated wilderness where you are operating, your allies use a different satellite communications network, so they have a hard time seeing your images and communicating with you about the rescue plan.

That challenge already hurts first responders’ ability to act quickly and rescue people from disaster zones or remote areas, one leading military scientist said. But new technology is on the way that could solve the issue and make it easier for service members to get the information they need to win the day. Best of all, the name of the new technology rhymes with a widely-loved type of salt-cured pork that many Americans enjoy with eggs, burgers, pizza, and, unfortunately, ice cream.

Space-BACN is pronounced just like “bacon” and it stands for Space-Based Adaptive Communications Node. Earlier this month, the Defense Advanced Research Projects Agency announced it had selected 11 businesses and research groups to start putting Space-BACN together. The goal is to produce low-cost satellites that use lasers to make sure other satellites can talk with each other.

“Due to how new these systems are, and the cutting edge technology for optical communications in space, there are numerous incompatible standards that prevent satellites from talking to each other,” Dr. Greg Kuperman, DARPA’s program manager for Space-BACN, said in a video last September.

Optical communications refers to using light, specifically laser beams, to gather and transmit data. Optical communications have the benefit of being faster, more secure and more flexible than radio communications, according to NASA. Though lasers require precise aiming and can be blocked by atmospheric interference like clouds, that’s not a problem in the vacuum of space. In the vacuum, Space-BACN “would create an ‘internet’ of low-Earth orbit (LEO) satellites, enabling seamless communication between military/government and commercial/civil satellite constellations that currently are unable to talk with each other,” DARPA wrote on its website.

One of the key advantages of laser communications is that it uses a much narrower beam than radio communications, which makes lasers much more difficult for an enemy to intercept, according to Payload, a space business newsletter. Laser communications form a “natural defense against adversaries being able to jam or listen in,” Dave Bettinger, the chief executive officer of SpaceLink, one of the companies that DARPA chose to build Space-BACN, told Payload.

Fast, secure and reliable laser communication between satellites would have huge benefits for service members, especially as the military, government and commercial sector send up swarms of new satellites for communication, GPS navigation, imagery and even for repairing other satellites. The military envisions a day when service members can take advantage of entire layers of satellites to detect a target, pinpoint its location, and get the right weapon pointed at it faster than adversaries can react. Each military service has a share of this vision, called Joint All-Domain Command and Control, and the Army’s share is called Project Convergence.

“Project Convergence is helping us figure out how to connect the right lethal system, the right shooter, the right arrow to get the lethal effects that we need in seconds rather than minutes or in some cases even hours,” Army Chief of Staff Gen. James McConville said in a statement earlier this summer.

Back in early 2020, then-Air Force Chief of Staff Gen. David Goldfein likened that capability to having Uber for weapons strikes. For example, a space satellite could detect an enemy ship and pass information to an intelligence, surveillance and reconnaissance plane or satellite. That asset can then get targeting information on the ship and pass it to a pilot or a Navy cruiser commander, along with a list of possible options to deal with the ship both “kinetically and non-kinetically,” Goldfein said. Ride-sharing apps like Uber act in somewhat similar ways, the general explained. Except instead of targets and weapons, those apps connect riders with cars.

“It’s actually closing a killchain,” Goldfein said. “You match a vehicle with a target … You’ve got options you can pick from, you can see the driver, the license plate, you can watch that person coming towards you. You start thinking about that application militarily … it’s exciting.”

But none of that happens if the satellites beaming information to and from service members can’t operate or can’t talk to each other. Even now, your average Marine infantry grunt would have a hard time doing their job without a constellation of intelligence satellites providing aerial photographs of their objective, communications satellites connecting them with command and control, and GPS satellites allowing them to call in airstrikes with pinpoint accuracy.

In recent years, U.S. military planners have become alarmed by other space-faring countries like Russia and China, which could use a wide range of electronic or other means to disable, jam, spoof or outright destroy the satellites that the U.S. military and the global economy rely on. Defending those satellites is the reason why the Space Force was created. One of the ways the military hopes to counteract the threat of Russian or Chinese counter-satellite weapons is to send up a whole lot more satellites and rely on commercial satellites, so that any one dead machine in space has less impact on the military and economy’s ability to operate.

It may get pretty crowded up in orbit. The military’s Space Development Agency envisions a National Defense Space Architecture that will consist of hundreds of satellites divided into layers, each with different responsibilities like tracking missiles, providing navigation for service members and communicating all that information back and forth.

It may seem a little half-baked, but hopefully Space-BACN can help bring home the bacon. One of DARPA’s biggest criteria for companies developing Space-BACN is to make the system reconfigurable so it can translate between a wide range of satellite constellations.

“The goal is to not make the perfect solution for everyone, but the good enough solution for most users,” said Kuperman. “Space-BACN will help connect a new proliferated space domain and enable the capability that that domain brings with it.”