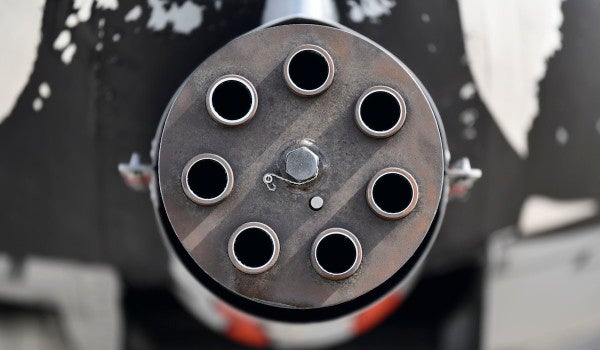 As first reported by The War Zone, DARPA's budget request for fiscal year 2021 includes a $13 million request for a new program to develop “an air-launched tactical range missile system capable of multi-mission support.”

Dubbed 'Gunslinger,' the novel weapons system “will utilize the high maneuverability of a missile system coupled with a gun system capable of scalable effects and engagement of multiple targets” for missions that include counterinsurgency operations, close air support, and air-to-air engagement.

As The War Zone rightfully points out, a missile combined with a gun system can best be described as an “unmanned flying gun,” one with the ability to loiter above potential targets before engaging.

Although DARPA's budget documents don't detail whether this missile-like system is either expendable or reusable or what aircraft it would potentially deploy from, the agency suggests that the system would eventually transition into Air Force and Navy hands.

So what does the Gunslinger program intend to accomplish? From the budget documents:

“The program will address the system and technology issues required to enable development of a robust missile system considering (1) vehicle concepts possessing the required aerodynamic, propulsion, and payload capacity for a wide operational envelope, (2) the algorithms that support maneuvering and target recognition to enable expedited command decision making for selecting and engaging targets and (3) approaches to incorporating modularity of design to reduce cost throughout the design and development process.”

While the prospect of an unmanned flying machine gun sounds exciting, Gunslinger remains in the beginning stages. Indeed, DARPA's 2021 budget request is specifically for “trade studies, to include propulsion, munitions, sensors, GPS and communication,” as well as the kinds of early-stage modeling and simulation work that imply a real-life prototype is a long way down the road.

For more context on aerial guns and loitering munitions, we highly suggest you check out this article at The War Zone.