The Pentagon's proposed budget for fiscal year 2020 contains a reversal of that old chestnut from Top Gun: When it's too far for guns, then switch to missiles 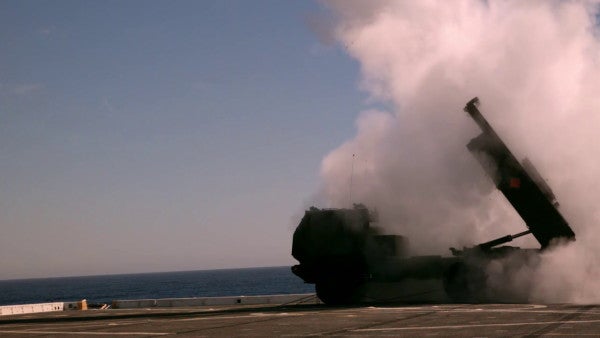 The Pentagon's proposed budget for fiscal year 2020 contains a reversal of that old chestnut from Top Gun: When it's too far for guns, then switch to missiles.

The purchase, primarily focused on bolstering Army arsenals for the stated purpose of “neutraliz or suppress enemy field artillery and air defense systems and complements cannon artillery fires,” would cost the DoD around $1.4 billion.

This pivot, which follows the Army's stockpiling of artillery shells under last year's budget request, is framed by the Pentagon as a critical part of its continued reorientation towards ground-based precision fires in response to increasing 'Great Power competition' with Russia and China following the relative 'defeat' of ISIS in Iraq and Syria.

Indeed, the Army's top modernization priority is focused on “improv the range and lethality of cannon artillery, and increas missile capabilities to ensure overmatch at each echelon,” according to a Pentagon release accompanying the FY2020 budget request.

It's worth noting that the GMLRS, normally fired from the M270A1 Multiple Launch Rocket System, is also employable from the M142 High Mobility Artillery Rocket System (HIMARS) that's seen increasing use in unusual configurations by both the Army and Marine Corps amid a push for additional unit-level long-range precision-fires capabilities with an eye towards contested maritime environments.

The following year, the Corps more than doubled its expenditures on the HIMARS, from $60 million to $134 million while embracing the “HIMARS Rapid Infiltration” shoot-and-scoot method (or HIRAIN) rapidly deploying and repositioning rocket artillery systems with the help of a C-17 Globemaster III, a practice pioneered by the Army in recent years.

“The deep-water ports and high-throughput airfields we once relied upon are also increasingly vulnerable to attacks with long-range fires,” as Marine Commandant Gen. Robert Neller wrote in a 2016 operating concept document, per Military.com. “These challenges will only grow as competitors pursue concepts for holding our forces at bay at greater distances and denying our ability to maneuver in both littoral and landward areas.”

Translation: Artillery units can shove a rocket down your throat from miles away, on land or sea — and yes, China, we're talking to you.

WATCH NEXT: The HIMARS Goes To Sea