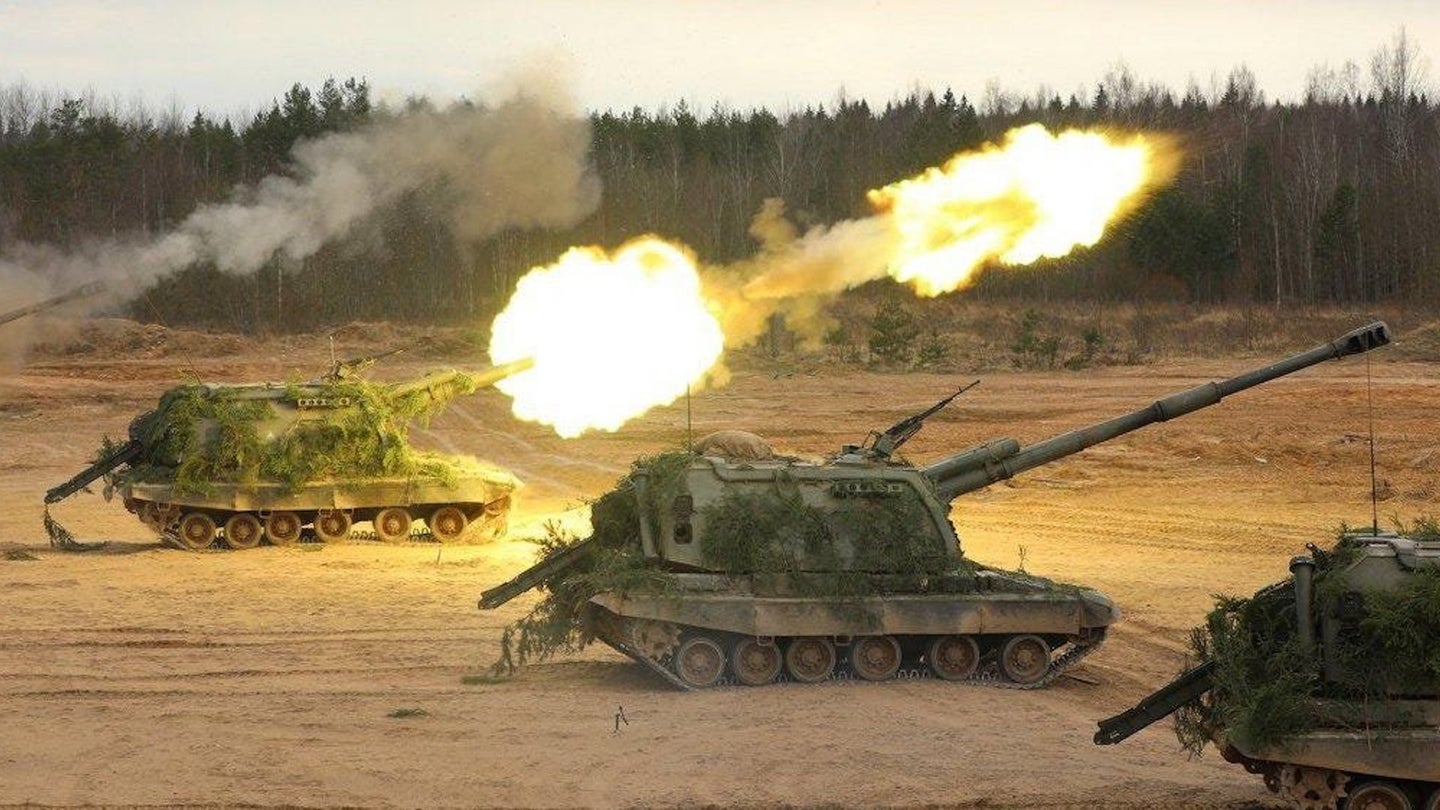 Russian 2S19 howitzers from the Western Military District's 138th Motorized Rifle Brigade fire during a training exercise at the Luga training area in Leningrad in this undated photo. (Russian Ministry of Defense).
SHARE

Russia is not even a year into its invasion of Ukraine and its military is already running low on ammunition, forcing commanders to dip into stockpiles of munitions produced more than four decades ago, a senior U.S. military official said on Monday.

Speaking during a background briefing on the Defense Department’s assessment of the ongoing war in Ukraine, the senior military official was asked to elaborate on comments from Director of National Intelligence Avril Haines earlier in December, who said that Russia was depleting its munitions stockpiles “quite quickly” and turning to allies in North Korea and Iran to replenish its arsenal.

“It’s really pretty extraordinary, and our own sense is that they are not capable of indigenously producing what they are expending at this stage,” Haines said during an event at the Ronald Reagan Presidential Library on Dec. 4. “That’s why you see them going to other countries, effectively, to try to get ammunition.”

The senior military official echoed Haines’ comments, stating that Russia’s stockpile of “fully serviceable and rocket ammunition” is “rapidly dwindling” and that the military would only be able to sustain its current rate of fire until “early 2023”

The resulting munitions drain “is probably forcing them to increasingly use ammunition in what we would consider degraded conditions,” the senior military official said, adding that the U.S. military has seen evidence that Russian forces are utilizing “older” ammo, “some of which was originally produced more than 40 years ago.”

This shortage “essentially puts Russian forces in a position to have to make a choice about what risks it’s willing to accept in terms of increased failure rates, unpredictable performance and whether or not these degraded munitions would require any type of refurbishment,” the senior military official said. “You load the ammunition and you cross your fingers and hope it’s going to fire, or when it lands that it’s going to explode.”

Despite leaning on Iran and North Korea for additional munitions support, the Russian military “will very likely struggle to replenish its reserve of fully serviceable artillery and rocket ammunition through foreign suppliers, increased domestic production and refurbishment,” the senior military official added.

While news of the Russian munition shortage may appear a telling detail in the context of an invasion marred by poor logistics and low morale, the rapid rate of ammo consumption is not unique to the Russian military in the conflict. According got U.S. officials, both Russia and Ukraine are burning through ammo  “at a rate not seen since the Korean War” as NBC News reported in November.

Speaking anonymously to NBC News, a senior defense official stated that while the Russian military was firing off 20,000 artillery rounds each day, the Ukrainian military was also running through 4,000 to 7,000 rounds daily, so far that the official cautioned that Ukraine “still needs a significant amount of artillery going forward.”

While the Ukrainian military has managed to augment their tanks and howitzers with ammo left behind during a rapid retreat of Russian forces in the country’s Kharkiv region in September, how much ammo the U.S. and its allies can continue to supply remains an ongoing question given the tens of billions in military equipment and security assistance that the U.S. has already provided.

As of Dec. 9, the U.S. had provided more than 1 million 155mm artillery rounds, 180,000 105mm artillery rounds, 135,000 120mm mortar rounds, 1,500 TOW missiles, 8,500 Javelin missiles, 46,000 “other” anti-armor systems and munitions, and more than 100 million rounds of small arms ammunition to Ukrainian forces since the start of the Russian invasion of the country, among other weapons, according to the State Department.

The latest details on Russian and Ukrainian munition stores come months after a U.S. defense official told the Wall Street Journal that the Pentagon was running “uncomfortably low” on 155mm artillery rounds after the U.S. had supplied the Ukrainian military with 800,000 of them back in August, indicating that the DoD sees these weapons transfers as a potential drain on readiness ahead of, say, a possible war between the U.S. and China.

While chief Pentagon spokesman Air Force Brig. Gen. Patrick Ryder told reporters that he was “not aware of any specific shortages” in U.S. military weapons due to Ukraine-related aid packages, another spokesman noted that Congress had also appropriated $600 million to kick munitions production up a notch at the time.

As our colleagues at The War Zone noted, the fiscal year 2023 National Defense Authorization Act passed by the House earlier this month calls for a far-reaching $2.7 billion procurement roadmap to help the Pentagon replenish its existing stocks of artillery, rockets, and anti-tank weapons to ensure that these critical munitions are available for “allies and partners” amid the ongoing war in Ukraine.