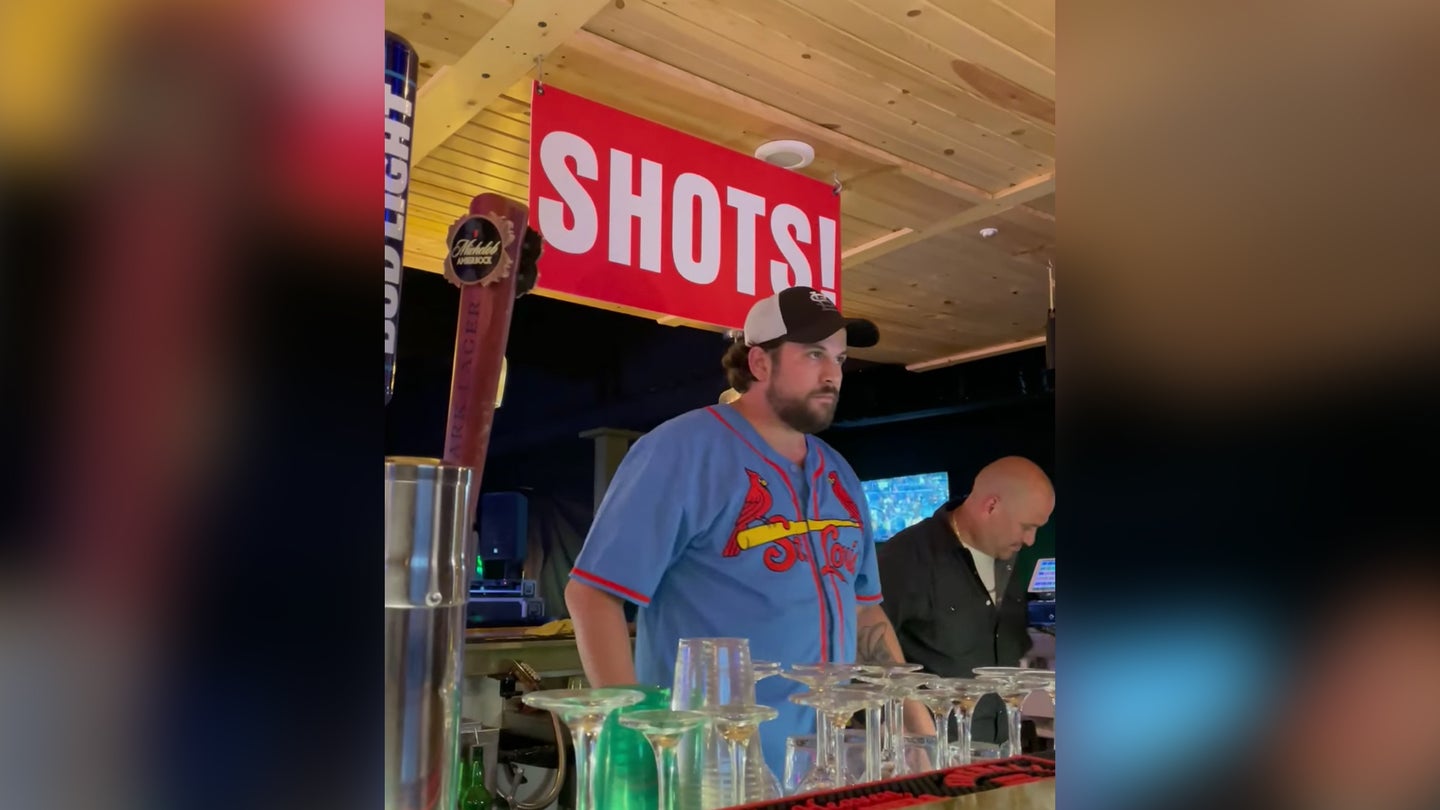 It’s a bad day for one Missouri bar after a video went viral over the weekend of a man behind the bar berating a group of service members who tried to get service with their military identification card.

Six service members were visiting the LOTO Lounge in Osage Beach, Missouri, when a man behind the bar — identified as Josh Weitkamp — refused to serve them, appeared to bend and throw away one of the service members’ military IDs, and proceeded to deny that they were in the military at all.

In the video, the group argues that the ID, called a common access card, was real. Weitkamp says he’ll “call my boys that have been to f—ing Afghanistan.”

“We’ve been to Iraq and Afghanistan,” one person in the group responds.

“Dude, you don’t even look old enough to know about f—ing 9/11,” Weitkamp replies, seemingly unaware that young men and women who were born after the attacks of September 11, 2001, are indeed old enough to join the military.

It’s unclear when the altercation took place; a screenshot of what is apparently an apology Weitkamp posted on Facebook says it happened on May 2nd, though the video was posted on Friday. Attempts to reach LOTO Lounge on Monday were unsuccessful.

Noel Cook, the person who posted the video on Facebook and whose profile says he is in the Air Force, did not respond to request for comment. Cook said on Facebook that he and “5 other military friends” went to the bar, and Weitkamp “started to destroy someone’s military ID because he ‘used to be a cop and knows what an ID is supposed to look like’ and bends her card and throws it in the trash, refusing to let us retrieve it and just leave.'”

Weitkamp is a local musician who was behind the bar according to LakeExpo, a local news outlet serving the Lake of the Ozarks, Missouri, community. He is not an employee of the bar, LakeExpo reported, but “has a personal connection to the family” that owns LOTO Lounge.

At one point in the video Weitkamp mocks one member of the group saying he can “do a lot more push-ups than me, that’s great, that’s awesome … what have you done for this country since World War II?”

“What have you done?” one young woman in the group says exasperatedly.

“Uh, paid my f—ing taxes? Worked my f—ing dick off every f—ing day,” he responds.

Weitkamp took issue with the fact that the ID, which has a service member’s birth date on the back, had lamination that was peeling off. At one point Weitkamp emptied his wallet to show that he couldn’t peel his credit cards or driver’s license. Despite the bartender’s certainty that the ID was fake, it’s common for lamination to peel from military ID cards over time.

Weitkamp refused to give the ID back, saying he’d return it when police arrived and told him to. Minutes later, a police officer enters and asks for the ID in question.

“Have you been in the military, sir?” Weitkamp asks the officer, who cannot be seen in the video.

“Can you tell me if you can peel off the front of a military ID?”

“Yeah, actually,” the officer says. “I remember mine being laminated.”

An online entertainment news site, Where Is The Buzz, posted a screenshot of what is apparently an apology from Weitkamp posted on Facebook, calling the incident a “stupid drunken mistake.” Task & Purpose was unable to verify the screenshot since Weitkamp’s Facebook profile no longer appears to be public.

“I am truly sorry for my actions on May 2nd at LOTO Lounge. I would like to personally apologize to the group of soldiers that came into the establishment,” the screenshot reads. “I said some regretful, hateful things in regards to your service to the country and I’m sickened by my own comments. It was a stupid drunken mistake and I would sincerely like to extend an apology to you and to anyone in the service that I upset.”

The owners of the bar told LakeExpo that they’re “huge supporters of the military” and the incident “was a huge misunderstanding.”

“We, at LOTO Lounge, deeply regret the events of May 2nd and want to stress that we have tremendous respect for military members and their service to our country. Josh Weitkamp is not a bartender at LOTO Lounge; he is a local musician who has personal ties to the venue,” LOTO Lounge said on their Facebook, which has since been deleted, according to LakeExpo. “He is extremely remorseful of his actions and we are working to make amends with the military members involved. We will do our best to reach out privately to those individuals and to publicly convey our appreciation to all military members in the future.”

The bar’s Yelp reviews are already being tanked by people outraged by the video. In response to one question asking if the bar is “a good place to celebrate after completing a tour of duty and performing military service for our country,” someone responded: “Oh absolutely not.”

“Do they offer anything special on Veterans Day?” another question said.

“For a nickel they’ll spit in your face,” read the response.

Update: This post was updated on May 11 with additional information about Josh Weitkamp’s connection to the bar from the LakeExpo.