A 40-foot-tall (12 meters) cross-shaped war memorial standing on public land in Maryland does not constitute government endorsement of religion, the Supreme Court ruled on Thursday 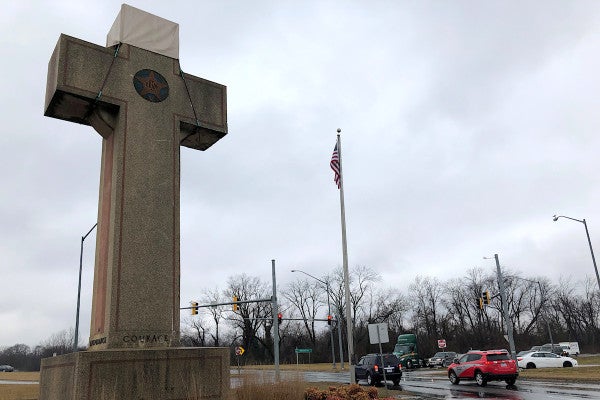 WASHINGTON (Reuters) – A 40-foot-tall (12 meters) cross-shaped war memorial standing on public land in Maryland does not constitute government endorsement of religion, the Supreme Court ruled on Thursday in a decision that leaves unanswered questions about the boundaries of the U.S. Constitution's separation of church and state.

The justices were divided on many of the legal issues but the vote was 7-2 to overturn a lower court ruling that had declared the so-called Peace Cross in Bladensburg unconstitutional in a legal challenge mounted by the American Humanist Association, a group that advocates for secular governance. The concrete cross was erected in 1925 as a memorial to troops killed in World War One.

The ruling made it clear that a long-standing monument in the shape of a Christian cross on public land was permissible but the justices were divided over whether other types of religious displays and symbols on government property would be allowed. Those issues are likely to come before the court in future cases.

The challengers had argued that the cross violated the Constitution's so-called Establishment Clause, which prohibits the government from establishing an official religion and bars governmental actions favoring one religion over another.

“In the fact of today's decision, we must all pursue new avenues to bolster the First Amendment,” said American Humanist Association executive director Roy Speckhardt. He said the group would seek to “strengthen the wall of separation between church and state, brick by brick.”

The fractured decision saw two of the court's liberals, Justice Stephen Breyer and Justice Elena Kagan, joining the five conservatives in finding that the cross was constitutional, but both liberal and conservative members of the nine-member court disagreed on which approach to take.

The court did not endorse a new more permissive test proposed by the American Legion veterans' group, which joined the case in defense of the cross, that religious displays on public land be struck down only if they coerce people into practicing religion.

“This decision simply affirms the historical understanding of the First Amendment and allows government to acknowledge the value and importance of religion,” said Michael Carvin, a lawyer for the American Legion veterans' group.

The Trump administration, which filed a brief backing the cross, welcomed the ruling.

Justice Samuel Alito, a conservative, wrote for five justices that although the cross is a religious symbol, “its use in the Bladensburg memorial has special significance” because it functions as a war memorial and has stood for such a long time.

“For nearly a century, the Bladensburg cross has expressed the community's grief at the loss of the young men who perished, its thanks for their sacrifices, and its dedication to the ideals for which they fought,” he added.

To tear the cross down now could be seen as an act of hostility against religion, Alito said.

Where the justices in the majority differ is on what kinds of other displays, including ones built more recently, would violate the Constitution.

“A newer memorial, erected under different circumstances, would not necessarily be permissible under this approach,” Breyer wrote in a concurring opinion.

But conservative Justice Brett Kavanaugh, in his own separate opinion, seemed to disagree with Breyer, saying that placing religious memorials on public land “is not coercive and is rooted in history and tradition.”

Liberal justices Ruth Bader Ginsburg and Sonia Sotomayor dissented. Ginsburg wrote that the court was eroding the notion that the government should be neutral when it comes to religion.

Conservative justice Neil Gorsuch and Clarence Thomas agreed with the outcome but did not join Alito's opinion. Both would make it much harder for religious displays on public land to be challenged.

The Peace Cross was funded privately and built to honor 49 men from Maryland's Prince George's County killed in World War One. The property was in private hands when the cross was erected, but is now on land owned by the Maryland-National Capital Park and Planning Commission, a governmental agency.

The American Legion holds memorial events at the site. Veterans and their relatives have said the monument has no religious meaning despite being in the shape of a cross, calling the lawsuit misguided and hurtful.

The Richmond-based 4th U.S. Circuit Court of Appeals found the cross unconstitutional, reversing a Maryland-based federal judge's decision allowing it. The 4th Circuit ruling was appealed by the park commission and the American Legion, which is represented by the conservative religious rights group First Liberty Institute.

Thursday's ruling follows a series of cases in which the court has sent mixed messages about limits on government-approved religious expression, including in two rulings issued on the same day in 2005.