""We have a volunteer force that does it every single day ... We are not kicking down doors because we want to make sure we get paid on the 1st and the 15th. We do that because we love our country, we love our Army, and we love each other" 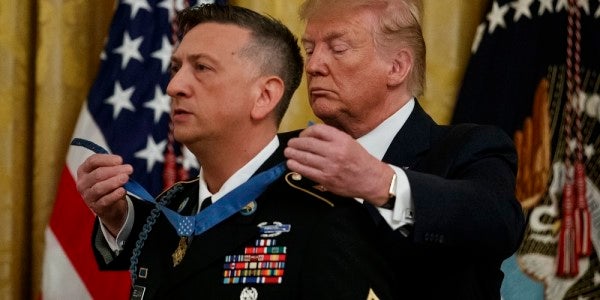 Moments before Army Staff Sgt. David Bellavia went back into the house, journalist Michael Ware said he was “pacing like a caged tiger … almost like he was talking to himself.”

“I distinctly remember while everybody else had taken cover temporarily, there out in the open on the street — still exposed to the fire from the roof — was David Bellavia,” Ware told Task & Purpose on Monday. “David stopped pacing, he looked up and sees that the only person still there on the street is me. And I’m just standing there with my arms folded.

Ware was one of the men that was there the night Bellavia first laid down fire to allow a pinned-down squad to exit a house held by several insurgents, and then went back into the house, killing five of them — one in hand-to-hand combat.

Ware went with Bellavia back into the house, camera rolling, and witnessed the heroic acts that earned him a Medal of Honor on Tuesday, the first given to a living recipient from the Iraq War.

And it’s been a long time coming. Col. Douglas Walter, who wrote Bellavia’s award recommendation, said at a roundtable with reporters on Monday that he started the process almost immediately after the unit returned from Fallujah, submitting the recommendation at the beginning of 2005.

Bellavia was awarded the Silver Star — which he called an “incredible honor in of itself” — and didn’t learn it was being upgraded until he spoke to President Donald Trump on the phone several months ago.

“There was always rumors” it would be upgraded, Bellavia told reporters on Monday. “But you know, 15 years goes by, and you move on with your life; you put the war behind you, you focus on your family, you focus on work. And my life was 100% perfect without a valor award of any type. … this was just very humbling.”

At the award ceremony on Tuesday, Trump took a moment to honor the Gold Star families of Bellavia’s brothers in arms who were in attendance. He also said Bellavia “single-handedly defeated the forces who attacked his unit, and would have killed them all.”

“Knowing that he would face almost certain death, David decided to go back inside the house and make sure that not a single terrorist escaped alive,” Trump said. “Alone in the dark, David killed four insurgents and seriously wounded the fifth, saving his soldiers and facing down the enemies of civilization.”

Bellavia told reporters on Monday that the “narrative of the Iraq War has long been written” and he wasn’t there to “change anyone’s mind.” He added that he’s “mighty proud” to be an Iraq War veteran.

While he repeatedly shifted questions to crediting the fellow soldiers sitting next to him, and others he served with — Ware described Bellavia as “embarrassingly modest” to Task & Purpose — they just as quickly pointed back to him, praising the actions he took that night.

But Bellavia said it was “really easy” to make the decision he did, given the men he was surrounded by.

“Peer pressure might make you smoke cigarettes at 13, but peer pressure can also make you do things you normally wouldn’t do,” Bellavia said. “It’s who your peers are — what kind of character and what kind of honor … I was always blessed to have some of the greatest men I’ve ever met, highest dignity and honor.”

As for what’s next, Bellavia said he wants “to be of service to my Army.”

“At the end of the day, this country is worthy of any sacrifice,” he said. “We have a volunteer force that does it every single day … We are not kicking down doors because we want to make sure we get paid on the 1st and the 15th. We do that because we love our country, we love our Army, and we love each other.”

SEE NEXT: ‘It Just Happened’ — The Iraq War’s First Living Medal Of Honor Recipient Recalls His Harrowing Fight Against 5 Insurgents