America’s newest Medal of Honor recipient: ‘Our greatest enemy is ourselves’

"While we have many enemies of this country today who want to see us fall, there’s no greater enemy in my opinion than ourselves." 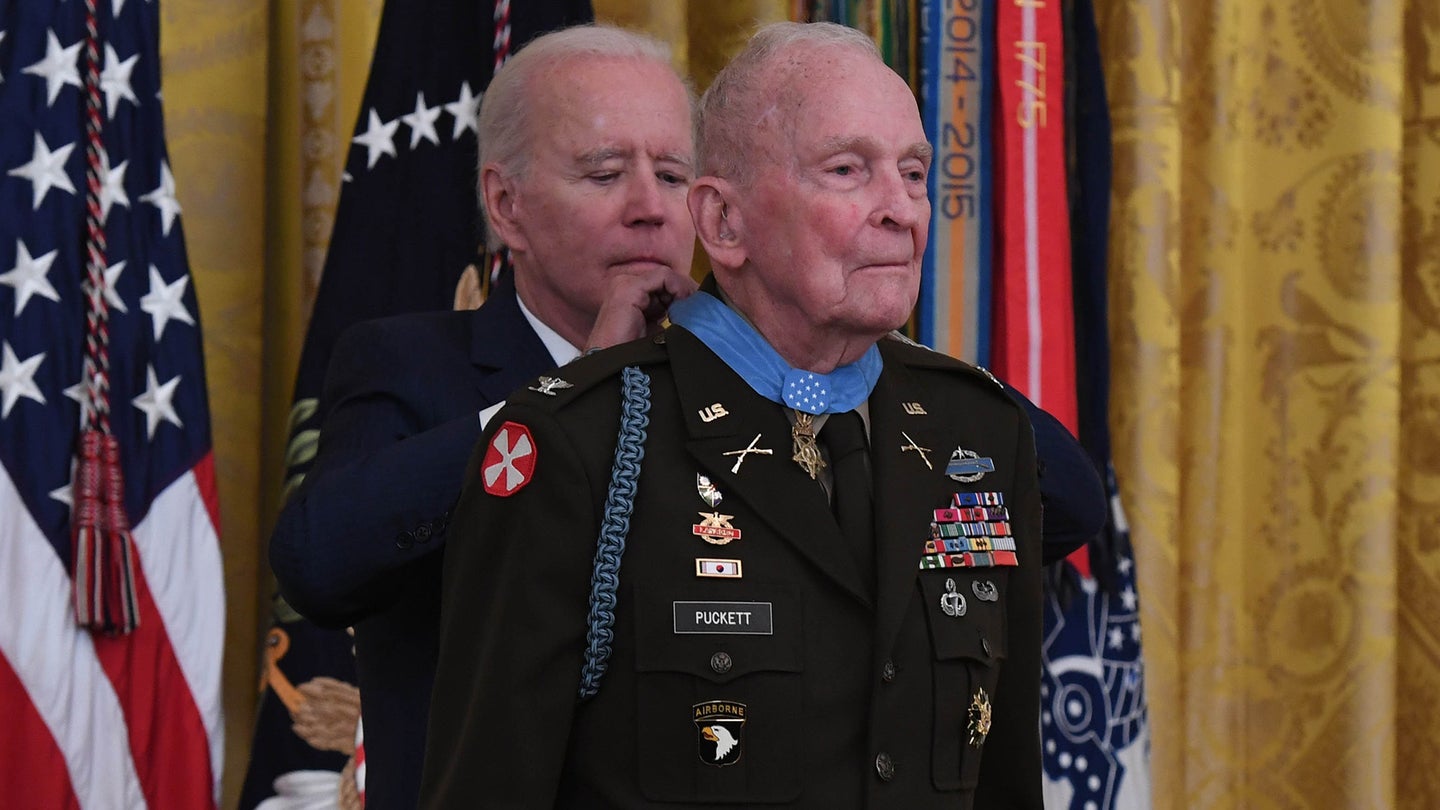 President Joe Biden presents the Medal of Honor to retired Col. Ralph Puckett Jr. at the White House on May 21, 2021, for his actions as a first lieutenant and the Eighth Army Ranger Company commander during the Korean conflict Nov. 25-26, 1950.
SHARE

Retired Army Col. Ralph Puckett Jr. has fought a lot of battles. He fought Chinese soldiers in the Korean War, North Vietnamese troops in Vietnam, and he fought a long recovery from the wounds he suffered in Korea. But the Army Ranger said America’s greatest battle is not with a foreign adversary, but with itself.

“While we have many enemies of this country today who want to see us fall, there’s no greater enemy in my opinion than ourselves,” Puckett said during a phone call with reporters on Thursday, the day before he received the Medal of Honor from President Joe Biden.

The award recognized Puckett’s “extraordinary heroism” during a battle near Unsan, Korea, in November 1950. A lieutenant at the time commanding the Eighth Army Ranger Company, which consisted of 51 Army Rangers and nine Korean soldiers, Puckett held off an overwhelming force of Chinese soldiers before eventually being forced to retreat. Having been seriously wounded, he told his soldiers to leave him behind, but was ultimately dragged to safety.

Puckett was awarded a Distinguished Service Cross after the battle and offered a medical discharge, which he refused. Instead, he recovered and went on to receive a second Distinguished Service Cross, two Silver Stars for valor, five Purple Hearts, and two Bronze Star Medals with the “V” device for valor. He fought in Vietnam, retired in 1971, and has since become a living legend and mentor within the Army Ranger community.

“He feared no man, he feared no situation and he feared no enemy,” said retired Army Gen. John Walter Hendrix in the Army’s official profile of Puckett. “Clearly a unique, courageous soldier in combat and even more importantly, in my opinion, Col. Puckett was an ultimate infantry leader.”

The 94-year-old Puckett was praised by both President Biden and South Korea’s President Moon Jae-in during his award ceremony at the White House on Friday, where Biden called him “a true American hero.” But the day prior, the Ranger had a warning for his fellow Americans.

“We have divided ourselves into tribes,” he told reporters on the press call. “Our enemies outside our country are aiding and abetting the dissension within our ranks. They’re watching with satisfaction as they see us destroying ourselves.”

Puckett pinned some of the blame on lawmakers in Congress, who he said have “put their self-interest ahead of their sworn oath” to protect democracy.

Related video: David Bellavia and the Medal of Honor

The former soldier did not point fingers at any politicians he felt were responsible for choosing self-interest over oath. However, earlier in the call, Puckett expressed his and his wife Jeannie’s faith in President Biden.

“She [Jeannie] expresses it best, she expresses exactly the way I felt about the President when he spoke to me,” Puckett said when recalling Biden’s call telling him he would receive the Medal of Honor. “’This is a man that’s leading our country. I think I can depend on him. So could you.’”

During the award ceremony, Biden also highlighted Puckett’s role as a commander in the early years after the military was desegregated in 1948.

“In an Army that had only recently been integrated, his team included Black, Latino, and Asian American members,” Biden said. “As my mother would say, ‘God love you, man.’”

When the military was considering opening all combat positions to women in 2015, Puckett looked forward to seeing women meet the Ranger standards, saying “I want to see them do it,” Biden recalled.

Whether these anecdotes reflect Puckett’s political views is unclear. However, the Ranger was vocal in his endorsement of one President in particular: George Washington, who the Ranger called “his favorite American.” Specifically, Puckett referred to the grim frozen days of Valley Forge, where Washington and his men weathered through the snowy forests to emerge ready to fight the British for American independence in the Revolutionary War.

“He was amazing, he never gave up. When things were the toughest, George Washington was there,” Puckett said. “He gave everything that he had to train and to lead his soldiers and to fight for freedom. George Washington is my favorite hero, because of the man that he was, the true soldier and leader that he was, and all he did for our country.”

But it wasn’t just Washington who rallied in Valley Forge that winter of 1777 to 1778. It was the common farmers-turned-soldiers under him. Those soldiers stuck with the general and with the cause through the snow and disease to fight, playing just as big a role as the famous founding fathers did in creating this country, Puckett said.

Now, we have a responsibility to carry on that tradition. Just as Abraham Lincoln once said “a house divided against itself cannot stand,” so too must we “come together and fight together as a United States of America,” Puckett said.

“Our country depends on you, me, what you do every day and how you live,” Puckett added. “Without you, we will not be able to maintain our freedom. It depends on us.”

Related: Mattis issues a grave warning: We’re in danger of destroying our democracy