Medal of Honor recipient Marine Col. Wesley Fox was laid to rest at Arlington National Cemetery almost a half-century after... 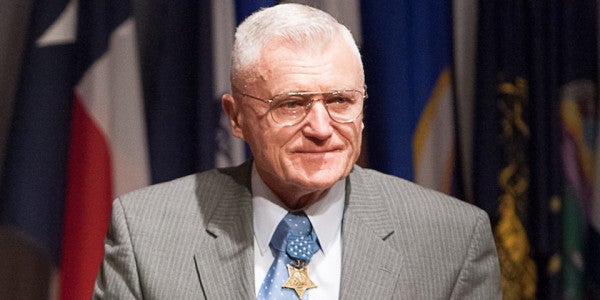 Medal of Honor recipient Marine Col. Wesley Fox was laid to rest at Arlington National Cemetery almost a half-century after the heroism that earned him the military's highest award, the Marine Corps announced on Tuesday.

Fox, who died at the age of 86 on November 4 of last year, served in the Marine Corps for nearly 43 years, during which he managed to hold every enlisted rank with the exception of Sergeant Major and every officer rank except General.

After two tours of duty during the Korean War, Fox was awarded the Medal of Honor by President Richard Nixon in 1971 for “conspicuous gallantry and intrepidity at the risk of his life above and beyond the call of duty” during an encounter with North Vietnamese forces in the northern A Shau Valley in February 1969.

Capt. Fox maneuvered to a position from which he could assess the situation and confer with his platoon leaders. As they departed to execute the plan he had devised, the enemy attacked and Capt. Fox was wounded along with all of the other members of the command group, except the executive officer. Capt. Fox continued to direct the activity of his company.

Advancing through heavy enemy fire, he personally neutralized 1 enemy position and calmly ordered an assault against the hostile emplacements. He then moved through the hazardous area coordinating aircraft support with the activities of his men. When his executive officer was mortally wounded, Capt. Fox reorganized the company and directed the fire of his men as they hurled grenades against the enemy and drove the hostile forces into retreat.

Wounded again in the final assault, Capt. Fox refused medical attention, established a defensive posture, and supervised the preparation of casualties for medical evacuation. His indomitable courage, inspiring initiative, and unwavering devotion to duty in the face of grave personal danger inspired his marines to such aggressive action that they overcame all enemy resistance and destroyed a large bunker complex.

Rest easy, Marine. You earned it.