Army Master Sgt. Gary Gordon was posthumously awarded the Medal of Honor for his actions during the Battle of Mogadishu 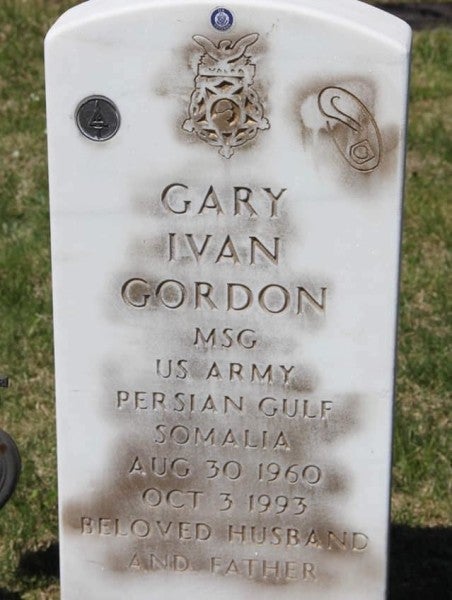 Law enforcement officers from Maine are investigating a possible vandalism case of a gravestone belonging to U.S. Army Master Sgt. Gary Gordon, a Special Forces soldier was posthumously awarded the Medal of Honor for his actions during the Battle of Mogadishu.

The Lincoln Police Department on Tuesday announced it was “with an extremely heavy heart” to report that the gravestone of Gordon, a native of the city, may have been vandalized within the last two weeks.

“MSG Gary Gordon is not only a hometown hero for Lincoln, he's an American Hero,” the police department said on social media.

“If anyone has any information about who did this, maliciously or with honorable intent, please contact us,” the department said, adding that, “if you are the person who did this and did it as purely an act of vandalism, do the right thing and turn yourself in. Before we find you.”

Following the announcement, the Lincoln Police Department received an outpouring of support for repairing the gravestone.

“The support, people coming forward financially to repair and things like that has been amazing to see,” a Lincoln Police Department officer said to Insider. “We've had a lot of people come forward wanting to help.”

The police department said that while it may have been a case of vandalism that it could have also been a “work in progress” with gold lettering on the engravings. However, it added that the family “was never notified that this was happening.”

A California-based mortuary service said it was highly unusual to conduct repairs or work on gravestones without notifying the family: “We don't do it unless the family requests it,” the 30-year mortician said to Insider, adding that he did not want to be identified.

“What happens with these is that over time the paint will fade,” the mortician said to Insider. “I don't know if someone was trying to clean it or [refresh] it. We'll go in and re-sand the letters and repaint them because it only last so long because of the weather.”

“If our people had cleaned it, they might've done a light sand blast at best, but they would actually do the painting of the engraved parts by hand,” he added. “It almost looks like somebody did a bad job trying to clean it,” he added.

He was deployed to Mogadishu, Somalia, amid its civil war in 1993, where he and Sergeant 1st Class Randy Shughart both volunteered to protect the survivors of a helicopter crash during a difficult mission to apprehend a Somali warlord.

“When Master Sergeant Gordon learned that ground forces were not immediately available to secure the … crash site, he and another sniper unhesitatingly volunteered to be inserted to protect the four critically wounded personnel, despite being well aware of the growing number of enemy personnel closing in on the site,” his medal citation reads.

Gordon's request was twice rejected by higher command due to the danger from the number of militants converging on the crash site. Upon his third request, he and Shughart were inserted, armed with rifles and pistols. The two soldiers were killed after running critically low on ammunition.

“Master Sergeant Gordon's extraordinary heroism and devotion to duty were in keeping with the highest standards of military service and reflect great credit upon him, his unit and the United States Army,” Gordon's citation says.

In 1993, Gordon's body was eventually buried and brought back to his hometown in Maine. Instead of being buried in Arlington National Cemetery, his mother, Betty, said he would have “wanted to be brought home here,” The New York Times previously reported.