“This is a decades-long problem, you’re not going to find the problem and solutions and causes in two months.” 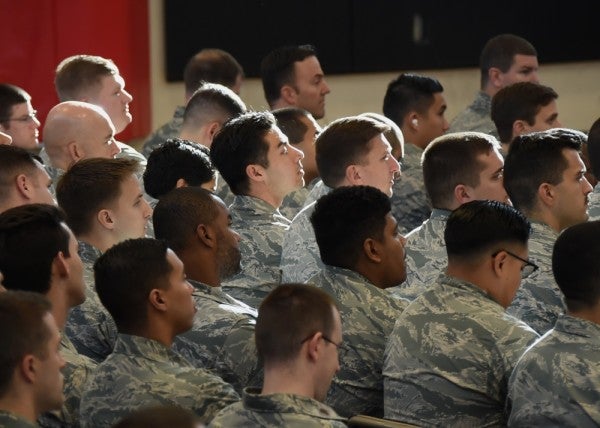 A former Air Force lawyer said that the branch’s goal to finish an internal review into racial disparities in its justice system by the end of July was “ridiculous,” and that the service would need a much longer study, combined with ongoing annual reviews, to take lasting steps towards fixing the problem.

“My understanding is that the Air Force Inspector General wants to have the investigation wrapped up by the end of July,” Col. Don Christensen (ret.), the former Chief Prosecutor of the Air Force, told the House Armed Services Committee during a hearing on racial disparities in the military justice system on Tuesday.

“That's ridiculous,” he said. “This is a decades-long problem, you’re not going to find the problem and solutions and causes in two months.”

The first phase of the review, which focuses on discipline, is expected to be completed by the end of July, an Air Force official told Task & Purpose on Tuesday.

Christensen was called to the hearing because Protect Our Defenders, the advocacy group of which he is president, released a report in May about how the Air Force covered up evidence of racial disparities in its justice system for years. That report, along with nationwide protests over the police killing of a black man in Minneapolis named George Floyd, prompted top Air Force officials to start a branch-wide dialogue on race and an internal review into the disparities led by the Air Force Inspector General.

However, Christensen was skeptical that the Air Force would be able to complete an effective review so quickly, and he implored Air Force officials to seek outside expertise in their effort to understand the deeper issues going on.

It also can’t be a one-and-done effort, said the former prosecutor. Instead, he argued that Congress must require continual reporting from the military on racial inclusion efforts, similar to how it compiles statistical reports on sexual assaults.

Brenda Farrell, director of the Government Accountability Office’s Defense Capabilities and Management Team, agreed that the military has a long way to go before it can be considered transparent on the issue of racial disparities in its justice system.

“I think periodic Congressional oversight is going to be necessary,” said Farrell, who led a May 2019 GAO report on the issue, in testimony on Tuesday. “I agree that doing an evaluation of the causes is not something that can be done in just a few months.”

The hearing was the first on the topic since the Protect Our Defenders report was released, and it gave lawmakers a chance to press the Air Force on why it fought a three-year legal battle with POD to keep evidence of the disparities from coming out, even though the Air Force itself had already decided to work on the problem as far back as 2016.

“The fact that you fought the [Freedom of Information Act] request from Protect Our Defenders for over three years is deeply troubling to me,” Rep. Jackie Speier (D-Calif.), chair of the Military Personnel Subcommittee, told Lt. Gen. Jeffrey Rockwell, the Air Force’s Judge Advocate General.

“Tell me and the American people, who was benefiting by your not being forthright in complying with the FOIA request?” Speier asked.

Rockwell said the requested materials fell under a FOIA exemption since they were a part of a “deliberative process,” though Speier didn’t buy it. Some have nicknamed it the “withhold it because you want to” exemption.

“Yeah, but that’s always used when people don’t want to comply with FOIA,” she said, about the pre-decision exemption. Speier also pointed out that Air Force senior leadership never seemed to make a decision with the materials anyway.

“That’s the problem,” she said. “You do nothing about it. So how is that deliberative?”

Rockwell reiterated previous findings by the Air Force that its racial disparities have been “consistent and persistent” since 1972, and the hearing moved on. But the Air Force isn’t alone in its lack of progress. Judge advocates from the Army, Navy, and Marine Corps who attended the hearing were also stumped as to the exact nature and cause of the disparities within their own justice systems.

Each branch spoke of the need to collect more data on the problem before prescribing specific solutions. However, many lawyers and lawmakers agreed that more diversity within the military senior officer ranks may be a great place to start.

Out of the military’s 43 active-duty four-star officers, only two are black, Christensen said, and the lack of mentorship for black service members can make it more difficult for them to climb the ranks.

“The fighter pilot community is less than 3% black, and so I think there’s a lack of understanding of what black service members and other minority service members are facing,” said Christensen, who also spoke of a need for more black JAGs in the Air Force. “I do think that the racial makeup especially in the Air Force leadership without a doubt has some impact on the disparities that we have.”