10 tips on how to talk about race, according to senior Air Force leaders

If you do nothing else as leaders, let’s commit to being really good listeners. 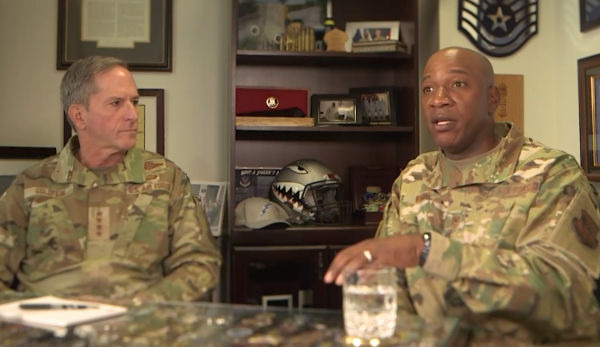 Though Air Force Chief of Staff Gen. David Goldfein and Chief Master Sergeant of the Air Force Kaleth Wright kept their discussion focused on airmen and flight commanders, the advice they shared could apply to similar conversations across the military and even outside it.

Here’s their advice on how to start the conversation, and, more importantly, how to keep it going beyond the current news cycle:

1. Admit you have blinders on

Goldfein: Almost every room I've ever walked into has been full of people who look like me, people who sound like me. Most of the systems in our Air Force have been designed by people like me, for people like me. So therefore, I’ve got blinders on that are going to keep me from seeing what others with a different life experience and background are going to see.

It’s not because I'm not trying to see it, I just can’t. It’s physically impossible because it’s not part of my life experience. So part of creating that safe space is acknowledging “Hey we’ve all got blinders. I can’t see what you see.” And so the way we fill those blinders in is by opening up and sharing; “Ok what do you think about this, tell me about what this was like for you growing up.”

Wright: I've talked with people who think “I kinda know what you go through because I’m Asian or because I’m female or because I was this or that.” But unless you live this experience, you don’t know.

In order to understand it, you’ve got to be open and you've got to be willing to allow people to talk to you about it. Don’t just assume that you know what it’s like even if you grew up in a black neighborhood or if you have a black spouse. What I was really getting at was: don’t assume that you know, but be open and allow people to talk to you about the experiences that they had.

G: Here are the facts [on racial disparities in the Air Force justice system]. Article 15s: 2.5 black airmen to one airmen for drug abuse. Marijuana use, detected by random urinalysis, 4:1, failure to go, not showing to work on time 2:1.

These numbers we’re going to take a hard look at, which is why the [Inspector General] is going to take an independent deep dive review into our judicial system to make sure we understand what’s going on.

W: We didn’t magically get to this point where African American males receive punishment at two to three times the amount of their white male counterparts for the same offenses. So part of this is self awareness on our part, understanding our own unconscious biases and asking the question “Hey, am I giving this person a fair shot the same as I would give the other person.”

If this was easy, we’d pull out the magic dust, sprinkle it across the Air Force and voila, we got it all fixed. Yes you do need to consider race, background and the environment that you have created directly or allowed that these airmen are attempting to thrive or just survive in.

But most importantly, you need to think “what are my own biases and how am I allowing them to affect that type of discipline that I administer?” The challenging part again is not easy because you don’t have a large sample size within your squadron. These statistics are spread across the entire U.S. Air Force. But I think for commanders, it’s important to think not just about the race of the airmen but about your own biases and how you administer discipline.

3. Have I created an environment where people can be open?

W: This is the first question you should ask, and it shouldn’t be to your airmen, it should be to yourself: Have I created the environment where these airmen feel like they can actually talk to me?

That’s a hard honest question to ask yourself, and if the answer to that question is no, then before you can expect people to open up to you, you’ve got to work on you and your environment, and your leadership style and get to a point where airmen trust you enough to open up and talk to you about topics like this.

4. Squint with your ears

G: If you do nothing else as leaders, let’s commit to being really good listeners. You know, active, engaged listeners where we’re squinting with our ears, we’re leaning in and that airman truly believes they’re the most important person in the room during the time frame that you’re there, and nothing is going to distract you from that conversation.

Related: 'Every American should be outraged' at police conduct in the death of George Floyd, Air Force's top officer says

If we start by being just really good listeners, that may be what opens up the space to have a good conversation. And it may not be just one conversation we’re looking for, but this is the beginning to sort of set the tone for folks wondering if they’re ready to share something that’s really personal and vulnerable. It may take two or three times before that airmen opens up, and so that’s the investment we have got to make as leaders.

5. The most powerful question: tell me how you feel

W: I don't think there's a script that we can pass along. But one powerful question that I think you can ask your airman is, “tell me how you feel.” You know, what have you been thinking the last couple of days? How is this impacting you? What's been your experience here?

Do you believe that you have the same fair chances as your white male counterparts? You don't need a PhD in counseling to get to the root of some of these challenges. And then the most important part after you ask that question is “am I willing to listen?” Accept what you get, and what you get might be raw, it might be something that you may not be ready for.

6. Lean into the conversation

G: The beginning of a conversation, depending on the distance and rank and responsibility, tends to always start rather shallow. Like “Hey airman, how are you doing.” “Sir I’m good.” That’s code for “sir, move along, I’ve got work to do,” right?

And sometimes I’ve found I’ve got to lean in a little bit to say “No, I got nothing else going on here, I want to know really how you are doing. Tell me your story, what brought you in, what does it mean to be part of your organization. … what’s in the way? What’s frustrating the heck out of you?

7. Get ready for the raw — the kind you might not be able to fix

W: Prepare yourself for some anger, sadness, rage … don’t be thrown off by the emotion this might dig up that you may not see coming. Hopefully everyone can learn something in the process.

8. How to tell someone when they’re acting prejudiced

It doesn’t mean that they’re not going to be offended. I would say in terms of how we communicate with each other, as a leader you need to be willing to hear the tough feedback, and as a communicator it’s important to stick to “this is what happened and this is how it made me feel.”

Some people cringe at this, like “hey we’re airmen, we’re warriors, we’re tough we’re not supposed to talk about our feelings.” But absolutely you should talk about your feelings because that’s the one thing that you can validate.

W: Close-mindedness is a form of ignorance, to be honest. I would say three things about someone who might be close-minded about this issue. Number one is education, education, education. You have to educate them about the importance of diversity. Whether it’s your history or their history.

And then a third thing, I think you have to throw some grace in that equation because you can easily get frustrated when people don’t want to hear your opinion or they are not as passionate about something that you think is important and I would argue you’ve got to be able to find some grace and not get frustrated and not, you know, fly off the handle or put them in a headlock.

And realize, like the boss said, that you can’t change people's opinions overnight. Some of us have our opinions about race and diversity and discrimination from the time we first walk and talk. For some this won’t be enough to change your opinion about race, disparity, bias, discrimination, whatnot.

W: Part of our responsibility is “How do we keep this conversation going beyond next week?” Because this is something that people think about every day, not just when there’s a crisis, not just when something happens on the news.

G: There are three areas to focus on. One: taking ownership, two, having a tough dialogue, creating space for it, and three, taking meaningful action. And we’re going to make the institution better. These are the actions we’ll take on top of words. We’re going to do that based on thoughtful dialogue across the force.

Wright and Goldfein recommended books on how to have these kinds of tough conversations.

Wright also recommended speaking with military family life consultants, and minority associations for guidance on how to talk about these things. But at the same time, “don’t look past the source,” he said.