"He was the best commander I’ve ever had.” 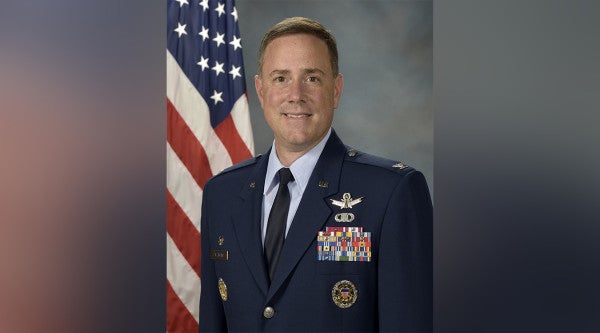 Airmen are mourning the loss of a Space Force colonel who built a reputation on getting to know his subordinates — even if it meant getting tased by security forces or bitten by their working dogs.

Col. Thomas G. Falzarano, commander of the Colorado-based 21st Space Wing, was found dead at his home at Peterson Air Force Base on Tuesday, wrote the base’s public affairs office in a statement.

Though the cause of death is under investigation, Falazarano appears to have died from natural causes, the statement said. There are currently no indications the colonel had novel coronavirus (COVID-19).

“A great commander that believed in and empowered the lower enlisted,” wrote one Facebook user when news of Falzarano’s death appeared on the popular Facebook group Air Force amn/nco/snco. “We will very much miss him.”

“He was the best commander I’ve ever had,” wrote another. “Rest easy sir.”

A 1994 Air Force Academy graduate, Falzarano took command of the 21st Space Wing in July 2019. Shortly afterwards, the colonel got to work getting to know his airmen.

“Listening to everyone’s stories is always a highlight,” Falzarano said at the time. “You don’t know people until you really get to talk to them.”

That work included getting tased by security forces and posing as the aggressor during K9 training, where he felt the bite of a military working dog named Rrudy.

“This was by far my favorite part of the day,” Falzarano said of getting tased. “The idea of being shocked was a bit nerve-wracking, but after feeling the shock it made me realize how much our defenders put themselves on the line to protect us.”

The colonel's efforts appeared to have paid off, at least according to comments about him on Facebook and Reddit.

Falzarano “took the time … to sit and talk with me about my future in the Air Force and if I wanted to go to the academy as an enlisted troop,” wrote one Facebook user. “He did truly care.”

The colonel’s superiors were also impressed.

“We are deeply saddened by this tragic loss for our Air and Space Force family,” said Gen. Jay Raymond, Chief of Space Operations. “Tom was an incredible leader, mentor and friend who will be remembered for his warm personality and dedicated service to our nation.”

“Col. Falzarano was a fearless leader who was motivated by taking care of his family and Airmen,” Johnson said. “He will be sorely missed. Our thoughts and prayers are with his family, and we are providing every comfort and assistance that we can to them.”

“Spanning the globe, this team provides missile warning and defense, space situational awareness, and space control for combat forces and the national command authorities of the United States and Canada,” according to the Air Force.