"Things shouldn’t have escalated to this level. Sarah should never have been placed in this predicament." 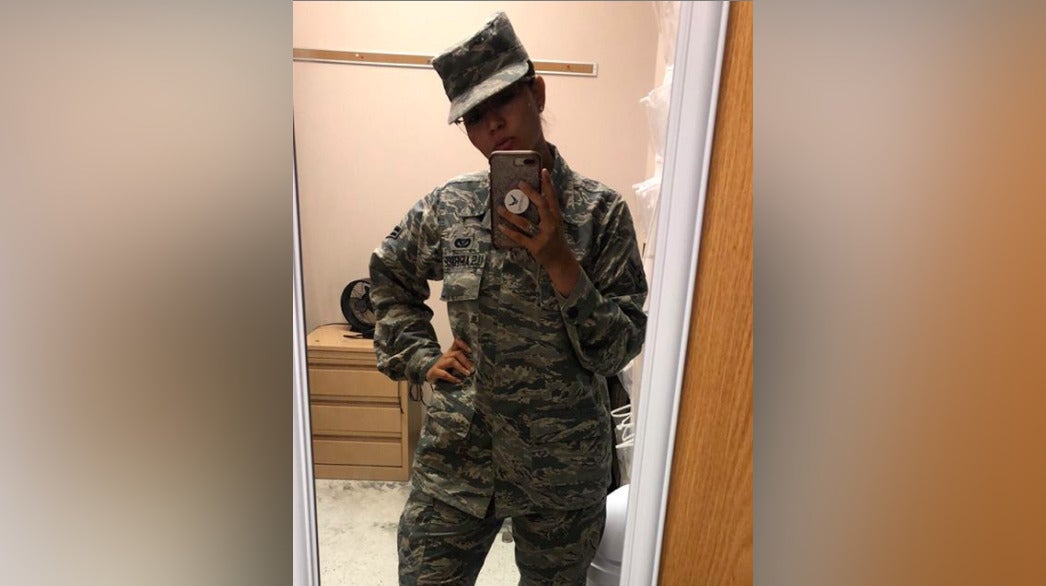 The top enlisted leader of the U.S. Air Force is looking into an airman’s complaints of sexual harassment at Misawa Air Base in Japan days after the airman first posted about the issue on Instagram.

Airman 1st Class Sarah Figueroa said she is still being stalked and harassed by a fellow airman months after she filed complaints against the man and notified her chain of command. The Instagram post went up on Oct. 13, and shortly afterward Chief Master Sergeant of the Air Force JoAnne Bass commented on the post, asking the airman to send her an email.

The airman’s mother also spoke about her daughter’s desperate situation in a video interview posted to YouTube on Wednesday.

Fatima Figueroa said the male airman was issued a no-contact order earlier this year (which is similar to a civilian restraining order), Figueroa said he has ignored the order and continues to follow Airman 1st Class Figueroa, making her feel scared for her life.

The chain of command, military police, Equal Opportunity Office, and other authorities have not been helpful in resolving the situation, punishing the male airman, or helping Airman 1st Class Figueroa secure a transfer out of Misawa, Figueroa said.

“This is a nightmare, this is a horror movie,” she said on YouTube in an interview with Kayla Rivera TV. “We shouldn’t be going through this. The only thing we’re asking is to transfer her out. That’s the only thing we want.”

The leadership at Misawa Air Base is aware of Figueroa’s concerns and the interview on YouTube, Pacific Air Forces Public Affairs told Task & Purpose on Friday. PACAF said “a variety of helping agencies” have conducted investigations since the incident was first reported.

“While we cannot discuss the details of the on-going investigations, we can confirm that we have been working toward a solution for Airman [1st Class] Figueroa and take all allegations of interpersonal violence, to include bullying and sexual harassment very seriously,” PACAF wrote. “The safety and well-being of all of our Airmen is our top priority and will continue to be.”

When asked about the male airman allegedly violating a no-contact order, and about Airman 1st Class Figueroa not being allowed to transfer, PACAF said it could not discuss the details of the on-going investigation.

The YouTube video was published on Oct. 21, eight days after Airman 1st Class Figueroa first shared her story in a series of Instagram posts.

“Last week, I was followed by the airman who sexually harassed and I feared for my life,” she said in her Oct. 13 post. “I thought I was going to die and I prayed over and over again while I was driving.”

According to her mother, Airman 1st Class Figueroa first started experiencing harassment from a fellow airman of the same rank and in a similar work billet in January.

Figueroa said the male airman made indecent and vulgar comments towards her, and at one point he even went into her room, opened her drawers, played with her underwear and bra, and continued to make “disgusting” comments to her, Figueroa said.

Airman 1st Class Figueroa reported the initial harassment to military police and her chain of command. According to her mother, the Air Force investigated the case, decided it was a case of sexual harassment, and issued a no-contact order to the male airman.

However, since then, the male airman has parked next to Airman 1st Class Figueroa’s car, followed her, made more inappropriate comments towards her, and said hello to her “like nothing has happened,” her mother said.

Airman 1st Class Figueroa and her family have repeatedly complained about the violations of the no-contact order. But they are told the matter is still “under investigation,” the airman’s mother said.

Both the airman and her mother have spoken with her commander, who Airman 1st Class Figueroa described on Instagram as “the most unprofessional person.”

“[H]e made it obvious this was not important by coming to the meeting 30mins late and defending the guy who sexually harassed me,” the airman wrote. “He claims it was just a coincidence that I was followed ‘because it’s such a small base.’”

It was not clear when the meeting took place or which specific commander Figueroa was referring to. According to the Misawa Air Base website, Col. Jesse J. Friedel took command of the 35th Fighter Wing in July. Whoever the commander was, he behaved similarly on a call with the airman’s mother, Airman 1st Class Figueroa said.

“This man is the most heartless person I have ever met, my family was in tears begging him to help me and all he did was defend the guy,” she wrote on Instagram.

In a separate Instagram post on Oct. 15, Airman 1st Class Figueroa wrote that she “tried every agency available to the air force” to seek help with the situation and to secure a transfer to another base, but with no success.

According to her mother, the Equal Opportunity Office can allow a transfer to another base only if the airman has been sexually assaulted, not just harassed.

“You literally have to be assaulted for that to be approved,” she said in her YouTube interview. “What are they waiting for? She’s even telling them that she’s scared for her life. I don’t understand. This does not work.”

At this point, Airman 1st Class Figueroa is emotionally, physically, and mentally drained, her mother said. She has trouble eating, especially when she sees the male airman at places where she gets food. Both her and her mother have trouble sleeping, and sometimes Figueroa stays up all night to watch the door of her daughter’s dorm room through her daughter’s phone camera.

“If she doesn’t answer a text I start panicking,” her mother said.

An airman should not be feeling unsafe on her own base when she’s not even in combat, Figueroa said.

“My conversations with her are like ‘Sarah if something happens, you know you have to fight to the end,’” she said. “How can you have a conversation like that when she’s in a base? She’s not at war. She’s in the base for God’s sake, how can I have conversations like that with my daughter?”

Airman 1st Class Figueroa has had some help from fellow airmen who volunteered to look out for her, watch her car and keep an eye on her surroundings. On YouTube, commenters offered to buy food for the airman so she does not have to put herself at risk by going outside.

In the YouTube video, the airman’s mother said she had reached out to The White House and Sen. Marco Rubio (R-Fla.) for help, but with no results.

On her Instagram bio, Airman 1st Class wrote #iAmVanessaGuillen in honor of Spc. Vanessa Guillén, a soldier who was sexually harassed and murdered by a fellow soldier in April.

Airman First Class Figueroa described herself on Instagram as “the most unproblematic person ever” and that she would not have made her story public if she had received more help from the Air Force.

“I would’ve never imagined posting things like this for the world to read,” she said. “Even though I am the victim in this situation, it feels so shameful to tell this story, it feels like this was a secret I needed to keep.”

“Whoever is a member of the military knows there are consequences,” for posting on social media, the airman’s mother said on YouTube. “She’s not going to pull that crap because she needs attention. she needs help. She needs to get out of there.

“Things shouldn’t have escalated to this level,” she added. “Sarah should never have been placed in this predicament. Action should have been taken from the beginning. This was just handled very lightly. I don’t understand why, this was taken so lightly, absolutely I can’t.”