"I serve because I want young women of color to believe they can achieve anything that they dream." 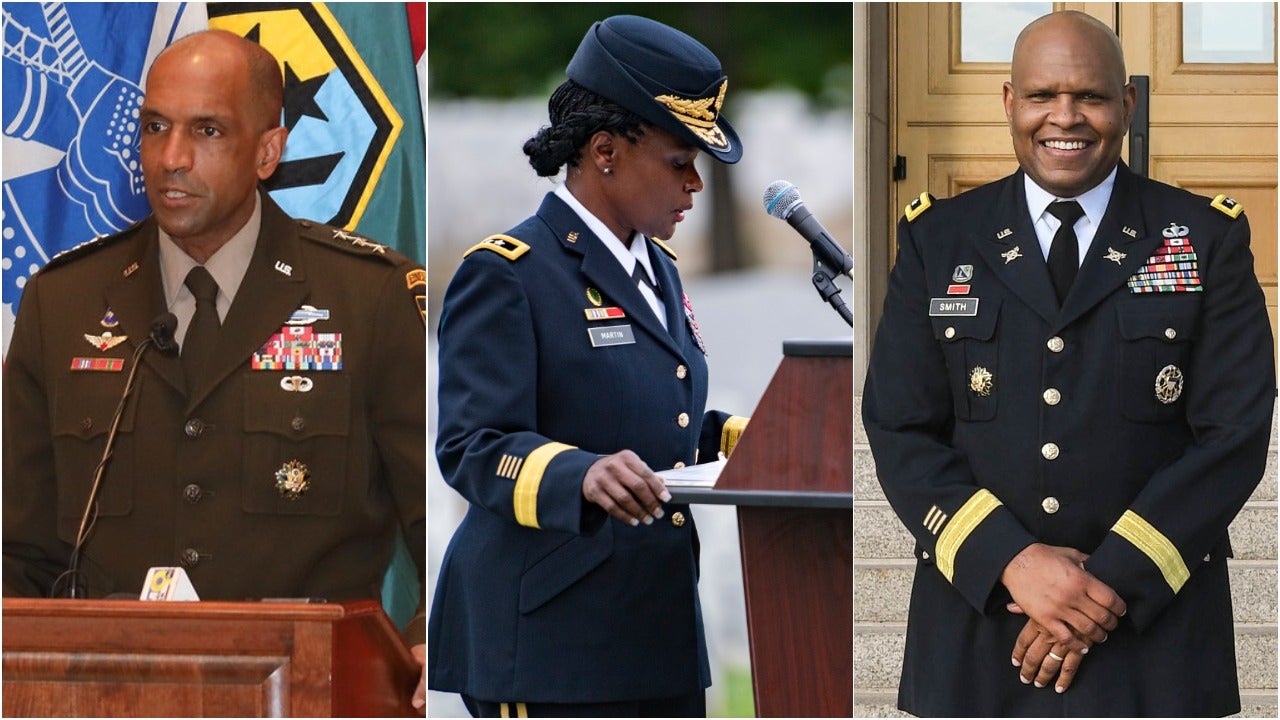 The Army has its work cut out for it when it comes to making the service an inclusive place for men and women of color. But for seven Black general officers, it’s also clear how far the Army has come since their days as young lieutenants and captains.

“I serve as an example of what is possible,” Maj. Gen. Donna Martin, the Provost Marshal General of the Army, said during a roundtable last Thursday. “I serve because I want young women of color to believe they can achieve anything that they dream. And I am encouraged every single day by the steps the Army is taking towards diversity.”

As Black History Month neared its end last week, seven Black Army generals spoke with reporters about their experiences in the service, the improvements that they’ve seen from the Army during their careers, and why they think young Black men and women should still be signing that dotted line. The roundtable came amid efforts by the Army to address racism and extremism in the ranks, all with the goal of making the service a more diverse and inclusive place.

“The Army, ladies and gentlemen, runs on trust,” said Lt. Gen. Leslie Smith, the Army Inspector General. “We have to be able to trust each other at all levels and all times, regardless of rank, where we come from, and what we look like. Without trust we cannot accomplish our mission.”

Since George Floyd died at the hands of a white Minneapolis police officer in May 2020 the Army has started what they call “Project Inclusion,” an internal effort to improve diversity and inclusion across the force. It primarily focuses on leaders having open and candid conversations with their soldiers to better understand their backgrounds and the challenges they’ve faced, as well as making changes to hair and grooming standards, removing photos and indicators of race from promotion packets, and reviewing the Army’s justice system to pinpoint racial disparities.

The Army Judge Advocate General, Lt. Gen. Charles Pede, told lawmakers last June that the Army was beginning an examination of its own justice system. Maj. Gen. Martin told reporters last week that the review is still ongoing, but that data has confirmed a few things for them already.

Martin said so far, they’ve found there “is a little bit of disparity as we respond to crime on our installations,” meaning that there is more response by law enforcement to people of color on Army installations. But, Martin said, when it comes to the adjudication process “race is almost not even a factor.”

“So what we’re doing is we have a survey, and the survey goes out to our communities and it goes to our families that live on installations. And it talks about it and asks very specific questions about how they feel about the safety on the installation, and it also very candidly asks them if they believe — and this is an anonymous survey — but if they believe people of color commit more crimes than non-minority people?”

The military’s problem with racism has been well-documented, but some white leaders say they’ve made it a point to try to understand to what extent or how Black service members’ lived experiences, both in and out of the military, differ from their own. The Army Vice Chief of Staff, Gen. Joseph Martin, told Task & Purpose in December that during his listening sessions with soldiers on his staff he was “blown away with some of the adversity that teammates on my team” had experienced.

Former Army Undersecretary Jim McPherson said one story in particular stuck out to him during his conversations with soldiers: a Black colonel told him that he hangs his uniform up on the back hanger in his car when he gets behind the wheel because he knows if he gets pulled over, a law enforcement officer approaching his car “probably doesn’t have his hand on his gun because he sees that uniform.”

“It resonated with me,” McPherson said. “Because I could now understand what the Black community is saying to us across this country.”

Unsurprisingly, the generals who participated in the roundtable conversation last week have all faced their own share of challenges. Lt. Gen. Scott Dingle, the Army Surgeon General, said as a captain he “ran into the hurdle of racism and prejudice by my boss, and was marginalized in my … evaluations.”

“It made me angry,” Dingle said, adding that it fueled him to prove his superiors wrong.

“I said, ‘Okay, let me raise my game. Let me show and perform and be the best through my performance, through my tests, through my leadership,’” he said. “And it was through that, over time, that I overcame those adverse or those marginalized evaluations that that person gave me, and was able to experience the success of command and ultimately to make general officer.”

Despite all of the challenges they’ve each undoubtedly faced, each of the general officers who spoke to reporters last week were unwavering in that young Black men and women should be encouraged in knowing that the Army is finally heading in the right direction.

“It’s a great place to serve when you love what you do and you love who you do it for,” Lt. Gen. Brito, the Deputy Chief of Staff for Personnel, said of the Army. “And they should feel safe and comfortable that it’s an environment that respects and values individual contributions of anyone who decides to serve.”

After all, the Army is “Army Strong” because of “our diversity and the strength of the team,” Dingle said.

“I think I can say for all of us that we are walking and standing on the shoulders and the sacrifices of many African American soldiers who have come before us.”