“Seems a little counter productive towards a medical condition" 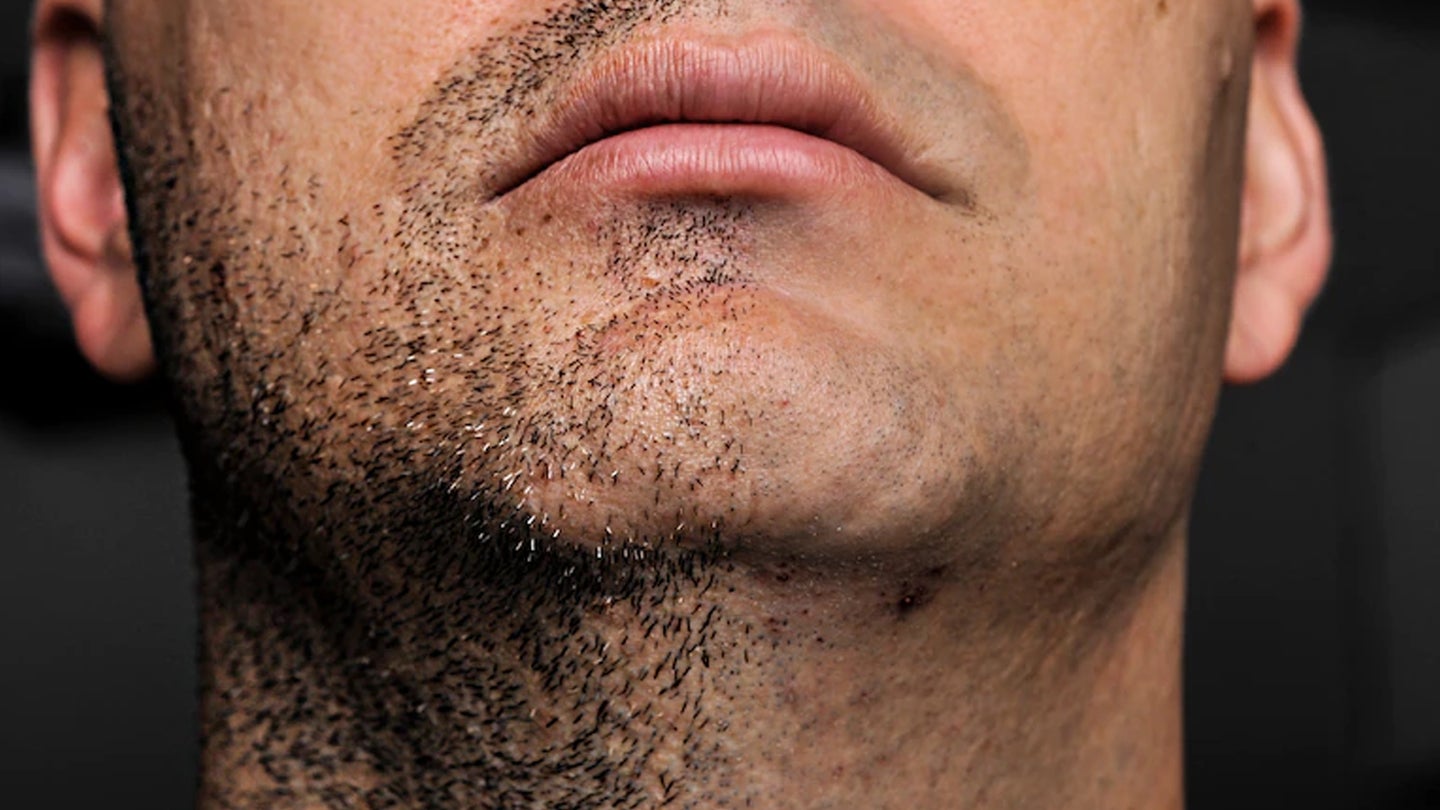 Airmen at Moody Air Force Base, Georgia who have skin conditions that make shaving painful are in for a world of hurt, since a base leader is requiring airmen with a shaving waiver to show up to work clean-shaven on the first duty day of the week.

“Be clean shaven every first duty day of the week at the beginning of their shift,” wrote an unnamed leader of the Moody-based 23rd Logistics Readiness squadron in a memo that was posted to the popular Facebook page Air Force amn/nco/snco on Thursday. An email sent with the memo said the policy was established by the commander of the 23rd LRS. In July 2020, that commander was Maj. Truett Kinard.

“If the member does not shave on the first duty day of the week, their shaving waiver can be revoked by the Squadron Commander,” the memo read, much to the chagrin of observers. After all, airmen who have shaving waivers receive them from doctors because they have skin conditions that make shaving painful or damaging to their skin.

“Doctor: ‘Well obviously shaving causes inflammation and irritation to your skin, which might lead to scarring. Here’s a waiver, and good luck on healing!’” wrote one Facebook commenter. “‘[Squadron commander/ 1st sergeant]: Fuck you, fuck the doctor, fuck your skin, take this paperwork.’”

The comment seemed to resonate, as it received 81 likes on Facebook. But Moody Air Force Base defended the policy, which took effect last month. The policy “aims to help supervisors enforce grooming standards within the squadron by adding the commander’s intent to the medical provider’s recommendation,” Lt. Col. Kristen Duncan, chief of public affairs at Moody, told Task & Purpose.

“Having each Airmen shave once per week was intended to help members stay within the guidance as identified in AFI 36-2903 for beard length,” she added.

The passage reads: “When authorized for medical reasons, members will keep all facial hair trimmed not to exceed ¼ inch in length. Individuals granted a shaving waiver may shave or trim their facial hair to present a neat, clean, professional image.”

But the Moody memo orders a clean shave, not a trim like the AFI states. The airman who shared the memo with Air Force amn/nco/snco said the shaving requirement is being used as a form of collective punishment at Moody. The anonymous airman said that the squadron commander “got tired of members within our squadron taking advantage of shaving waiver profiles, whether their beards are a bit too long, it has a sculpted appearance or someone is straight up rocking a goatee,” he said on Facebook.

An email sent along with the memo seemed to confirm that theory, since it said the policy was “a direct result of many non-conforming beards observed across the squadron.”

Many airmen who want a shaving waiver just want to grow out their beards and don’t actually have a medical need for it, the anonymous airman said. However, “the other half really needs it,” he wrote.

“Now the guys that are deserving of a shaving waiver will suffer as their skin breaks out because they now have to shave weekly as if they were not on a profile,” he added.

Indeed, the Moody policy seems to defeat the purpose of a shaving waiver. One common condition that requires a waiver is pseudofolliculitis barbae (PFB), also known as razor bumps, a skin condition that makes shaving painful and can cause scarring. This condition is more commonly found among Black airmen than White airmen, which adds a racial component to the issue of shaving in the Air Force.

“When I went through basic training at Lackland [Air Force Base] in 1964, one of our members was a person of color that had [PFB],” one veteran told Task & Purpose in July. “He tried to shave even though his skin was being damaged by the razor and the final result was still not acceptable to the [drill instructors]. The DIs made him dry shave as punishment, which resulted in him mutilating his face.”

Last month, Air Force scientists published a study showing that the Air Force’s ban on beards may be contributing to racial discrimination and hurting promotion opportunities within the service. The study found that airmen with waivers face significantly longer promotion times than airmen without waivers. Since shaving waivers are associated with delayed promotion times, and since most airmen with waivers are Black, it means that the Air Force’s anti-beard policy is effectively discriminatory, the study argued.

Many airmen and veterans applauded the study, saying that it resonated with their own experiences in the Air Force.

“I do think there is a stigma with beards or shaving waivers,” one Air Force second lieutenant with a decade of prior service in the enlisted ranks told Task & Purpose on condition of anonymity to avoid professional reprisal. “I don’t think Black airmen are not getting promoted because they’re Black, but because of the stigma associated with the shaving waiver … I think the Air Force would have to allow beards in order to remove that stigma.”

The study comes as the Air Force attempts to reduce the stigma surrounding shaving waivers and create a more inclusive environment for airmen of color. For example, in June 2020, the Air Force surgeon general extended shaving waivers so that they are valid for up to five years. Seven months later, in January 2021, the 380th Air Expeditionary Wing, based at Al Dhafra Air Base, United Arab Emirates, published a press release urging airmen who don’t have a legitimate need for a waiver not to get one.

“The best way to counter the stigma is to ensure that 100 percent of individuals with a waiver have a true medical necessity,” said Capt. Noah Russell, physician assistant for the 380th Expeditionary Medical Group, who led a clinic to teach airmen about the waivers. “This is the primary goal of the shaving clinic; to provide a single, consistent approach to shaving waivers. Additionally, educating all Airmen on the nature of pseudofolliculitis barbae (PFB) and the need for shaving waivers may help to reduce stigma.”

Despite all the racial and medical baggage tied up in shaving waivers, Moody defended its decision to require airmen with waivers to show up clean-shaven once a week. Duncan cited the standard verbiage that accompanies shaving waiver documentation, which says a “member may be required to shave closely due to operational requirements, at the discretion of the commander, or for any training requirements that include, but are not limited to, proper wear of gas masks, respirators, and occupational masks.”

That means that even if an airman has a shaving waiver, his commander can still tell him to shave for reasons that include passing a gas mask fit test. Air Force scientists wrote last month that the jury’s still out on whether or not facial hair actually impedes a gas mask seal, but even if it does, commenters on social media said it was absurd to pin the new Moody policy on gas mask seal tests.

“Seems a little counter productive towards a medical condition,” wrote one Facebook commenter. “That’s like ordering someone to run that’s [sic] in a boot just to make sure that they’ll be ready for their [physical training] test when they don’t have a boot.”

Duncan pushed back on the criticism, saying that the policy was absolutely not meant as a form of collective punishment or developed with any bad intentions. “Leadership is sensitive to the shaving-waiver recommendations, but still has an obligation to uphold military image and shaving discipline,” she said.

Still, the airman who shared the memo on Facebook said the policy had convinced him that the Air Force needs to change its policy on shaving. Instead of issuing shaving waivers and using collective punishment to enforce beard length, he asked, why not allow beards and then regulate them the same way other body hair is regulated.

Before this memo, the airman hadn’t much cared for the widespread calls to allow beards in the Air Force, “but it wasn’t until this recent event within my squadron made me realize how stupid this whole thing is and here I am making the post lol,” he wrote.

“I get it we wanted to be ‘one,’ all be the same, look the same, therefore everyone had to shave,” he said. “But with all the modification/adapting to new culture and accepting individualism [and] all the cosmetic updates for women … to the way they now wear their hair… it’s shocking that the one thing most guys within the service [are] asking for is so far out of reach.

“I’m sorry for the rant but I’ve held it in for quite some time,” he added. “Because to me it’s a simple fix[:] allow it and regulate it, one less appointment for the medical team.”