Lt. Gen. Jay Silveria had had enough. The U.S. Air Force Academy had struggled for years with a reputation as... 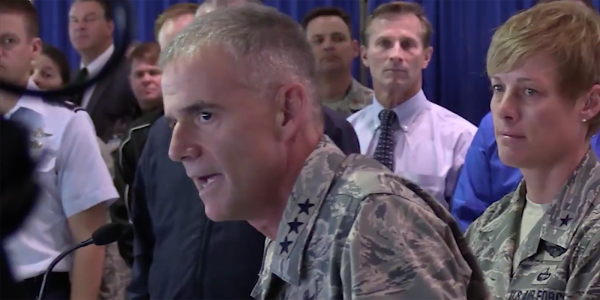 The U.S. Air Force Academy had struggled for years with a reputation as a haven for narrow-minded views and intolerance of diversity when Defense Secretary James Mattis named Silveria — an ’85 alum and a pilot of F-15s, HH-60s, and F-35s — as the school’s new top general in May. But this week, news broke that five black cadet candidates at the Air Force Academy’s in-house prep-school were targeted by a hate crime: Someone in their cohort entered their rooms and scrawled on their whiteboards: “Go home n****r.”

Silveria, coming off a deployment as the second in command of the air war in Afghanistan, quickly put out a statement reminding cadets and the public that “there is absolutely no place in our Air Force for racism.”

But he was just getting started.

The superintendent announced an all-hands meeting Sep. 28 with… well, all hands: the academy staff and faculty, the air wing of 4,000 cadets, the prep-school candidates. And when the mass assembled, Silveria lit into them in a five-minute speech that’s gone viral for its passion, its clarity, and its message: “If you can’t treat someone with dignity and respect, you need to get out.”

Here is excerpted text of Silveria’s fiery appeal, a sort of St. Crispin’s Day speech for unit cohesion and, well, just plain humanity in the year 2017:

You may have heard that some people down at the prep school wrote some racial slurs on some message boards. If you haven’t heard that, I wanted you to hear it from me.

You should be outraged not only as an airman but as a human being.

What we should have is a civil discourse and talk about these issues. That’s a better idea…

So just in case you’re unclear on where I stand on this topic, I’m gonna leave you with my most important thought today:

If you can't treat someone with dignity and respect, then you need to get out.

If you can't treat someone from another gender, whether that's a man or a woman, with dignity and respect, then you need to get out.

If you demean someone in any way, then you need to get out.

And if you can't treat someone from another race, or different color skin, with dignity and respect, then you need to get out.

The investigation into who scrawled the dirtbag dime-store race hate on students’ walls is ongoing. The father of one of those students told Air Force Times that “My son is not a victim, I don’t view him as a victim.” The real victim, he said, “is that individual , because that individual is going to lose a promising career in the military.

“That individual is going to go home disgraced,” he added. “[They are] the real victim, because they were raised with that kind of vitriol and that kind of hate.”