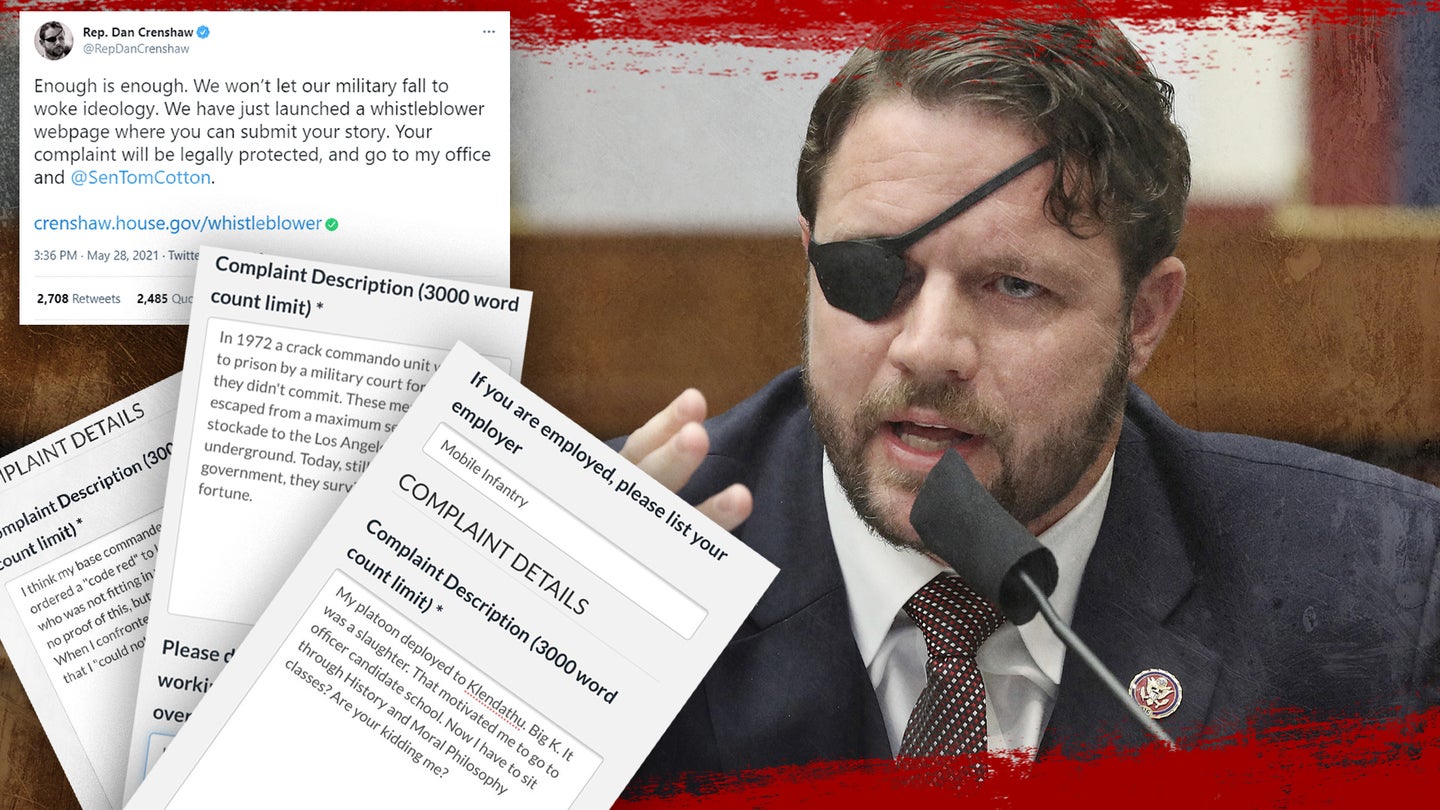 Navy SEAL veteran Rep. Dan Crenshaw (R-Texas) recently took to Twitter to announce a newly created whistleblower website to help root out the scourge of wokeness in the U.S. military — and he is getting trolled hard over it.

The trouble started on May 28, when the former SEAL officer-turned-congressman posted a call to action on Twitter encouraging service members to reach out to his office, and to Sen. Tom Cotton (R-Ark.), a former Army officer, with evidence that “woke ideology” has infiltrated the ranks of the U.S. armed forces.

It is not uncommon for members of Congress to solicit tips through whistleblower and complaint pages: After all, it’s a useful tool for hearing from constituents, informs lawmakers of issues facing folks in their district, and it might lead to impactful legislation that resolves whatever problem someone blew the whistle on.

That said, Crenshaw’s recent call to action is somewhat atypical, seeing as these sorts of campaigns usually focus on gathering evidence to illustrate the severity of a single concrete problem like sexual assault and harassment in the military, government malfeasance, and other systemic issues like corruption, not for something as vague and subjective as “woke ideology” in the ranks. It might also strike some as ironic that Crenshaw has offered up whistleblower protection seeing as he made headlines not too long ago and faced the possibility of an ethics committee investigation over his alleged involvement in a plot to go after another veteran who blew the whistle on sexual harassment at the Department of Veterans Affairs.

For those who have been hiding under a rock (or something), the typical complaint about wokeness in the U.S. military goes a little something like this: Because some of the branches in the military created maternity flight suits and updated their hair regulations for servicewomen, this proves that the Department of Defense is caving to pressure over political correctness and isn’t focusing enough on warfighting. The counter-argument to this is they can do both: Servicewomen can wear their hair in a ponytail and shoot the enemy at the same time, probably more effectively since their Kevlar helmet won’t be pushed down over their eyes due to a tight hair bun.

The complaint that the U.S. military has become too woke isn’t entirely new, but it has become a favorite line among some Republican lawmakers as of late. Indeed, Crewnshaw’s call to action came just one week after Sen. Ted Cruz (R-Texas) retweeted a video that included Russian propaganda that was cut over a new Army recruitment commercial with the words “Holy crap. Perhaps a woke, emasculated military is not the best idea.” The Army recruitment video told the story of an actual soldier, and her path to joining the service, and Cruz was blasted for criticizing a soldier who volunteered to serve her country, and for using a sweaty Russian military video to do it. Other videos from the same campaign were similarly trolled over alleged wokeness to the point that the service shut down the comment section on YouTube for the videos.

And so, with the internet being the internet and with Twitter serving as the de facto proving grounds of snark on social media, a bunch of people, some of whom were veterans, had a field day using the whistleblower site (which is still live, by the way).

Some of the responses specifically parodied the effort to source examples of ‘wokeness’ in the military. But others took a different approach, and started writing out the plotlines for movies and shows, like the one above which referenced Stripes. They then took screenshots of their submissions and shared them online.

“My platoon deployed to Klendathu,” wrote Peter Lucier, a Marine veteran and past contributor to Task & Purpose, based on a screenshot of the whistleblower submission page posted to Twitter. “Big K. It was a slaughter. That motivated me to go to officer candidate school. Now I have to sit through History and Moral Philosophy classes? Are you kidding me?”

For the section that asked respondents to lay out their goals, Lucier wrote “Kill the bugs” in an obvious head nod to the 1997 sci-fi action flick and bastardization of Robert Heinlein’s book Starship Troopers.

The trend quickly got on. “Woman in authority implied I was a little short for a storm trooper,” wrote another, this one a reference to Star Wars Episode IV. And then it just picked up steam from there:

Now, I’m not sure what the original plan really was here — if Crenshaw and Cotton expected droves of service members to descend upon their whistleblower page with stacks of documents laying out all the ways the U.S. military has gone soft because it changed a few regulations to allow some of its service members to be comfortable in their day-to-day jobs. Or if they expected hard evidence that would explain how celebrating the voluntary service of a diverse group of people has eroded the fighting power of the U.S. military.

Based on these responses, it doesn’t seem like it worked out that way. On the upside, this is a pretty great movie and TV watch list, so long as you’re willing to wade through the tidal wave of sarcasm.

Update: This article has been updated after publication with additional submissions from readers and respondents online.