Meet the M1299, the new Army howitzer with twice the range of the Paladin

The future of Army long-range precision officially has a name 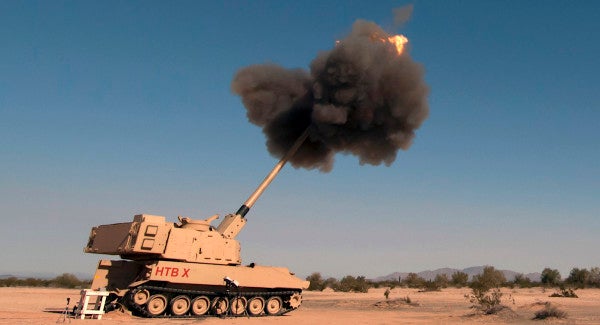 The future of Army long-range precision officially has a name.

Developed in response to increasing concerns of near-peer adversaries like Russia and China, the ERCA gun nailed targets with pinpoint accuracy at a range of 62 kilometers during testing at the Yuma Proving Ground in Arizona in March, far outstripping the range of both the M109A7 Paladin (30km) and M777 (40km with the M982 Excalibur guided artillery shell) howitzers.

Compared to those systems, the M1299 will receive two “leading-edge technologies,” as Army Recognition reports: the experimental new XM1113 rocket-assisted artillery shell, and a longer 58 caliber tube designed to boost the conventional howitzer range from 38km to 70km and, eventually, an eye-popping 100 km “within the forthcoming four years.”

Extended Range Cannon Artillery, or ERCA, will be an improvement to the latest version of the Paladin self-propelled howitzer that provides indirect fires for the brigade combat team and division-level fight

“We know we need the range in order to maintain overmatch,” Col. John Rafferty, head of the long-range precision fire cross-functional team, told Defense News. “We need 70 to 80 kilometers because that's the start, and then we will be able to get farther. Right now we are on a path to 70 kilometers with ERCA.”

Extended range is only one element of the Army's never-ending pursuit of lethality. The M1299 will incorporate a fully automated ammo loading system to boost the howitzer's rate of fire from 3 rpm to 10rpm, although Defense News reported in March that the Army doesn't plan on fully incorporating the system “beyond the first iteration” until 2024.

Soldier may not need to wait that long to get their hands on the ERCA program's new tech, though: the official M1299 designation comes just weeks after the Army awarded a $45 million contract to BAE Systems to integrate various elements of the ERCA system into the service's existing and future Paladin howitzers.

Anyway, congrats to the M1299 on its induction into the world of alpha-numeric military designations. We hope your upcoming baptism is a baptism by fire.